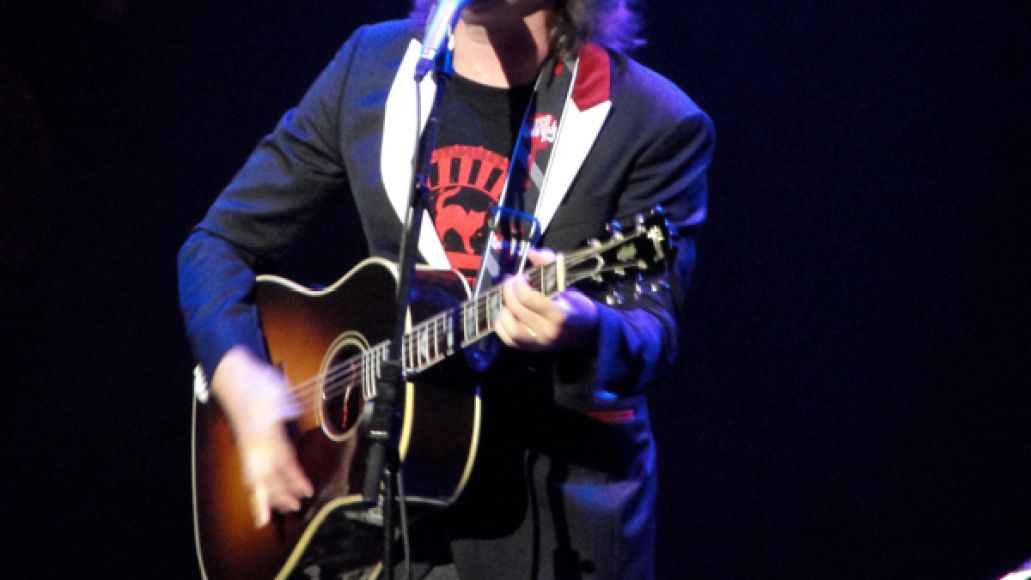 Rufus Wainwright is a gracious, consummate performer, and he displayed that largeness of spirit on a Wednesday night at Chicago’s the Vic Theater to a packed house of ardent fans, treating them to an over two-hour set full of guests, rarities, and fan favorites.

Krystle Warren kicked things off with a short but impressive set. She’s got a soul-deep voice, distinctively low for a woman, and she slides between honeyed tones as easily and skillfully as Wainwright himself. Adam Cohen was up next, touring in support of his latest album Like A Man. Cohen confessed that he expected to be asked on tour, since Wainwright is his “brother-in-law”: “I don’t know how he got my sister knocked up, but he did!” The crowd laughed, and he added, “It’s true! His daughter is my niece, for real.” (Wainwright and his partner, Jorn Weisbrodt, have a daughter with Lorca Cohen.)

Cohen’s lyrics lean towards the covertly sexual at times (his second track, “Sweet Dominique”, features the choice line “you opened like a flower in the heat”), but in person this comes across less creepy and more as flirting with the world (and his female cellist, male guitarist, etc). The one consistent thing between his recording and live show is his gorgeously textured voice, at once identifiably Cohen and yet distinctly his own. He closed his set with a quiet rendition of a song by his “famous Canadian” parent (“Celine Dion!” he joked), “So Long, Marianne”.

Finally, candles illuminated the dark as Wainwright began to sing. Without a single stage light, Wainwright sang his dirge to his late mother Kate McGarrigle alone, the lights coming up and his eight-piece band entering at the end. The set gained speed from there, spinning through upbeat tracks from 2012’s Out of the Game, like “Rashida” and “Barbara”, and fan favorites like “April Fools” and “The One You Love”.

The first clue we were in for an extraordinary set was when Wainwright ceded the stage altogether. Warren and musician Teddy Thompson each took a turn covering a McGarrigle song, both of which are featured in a forthcoming documentary about McGarrigle’s memorial concert. Warren in particular received enthusiastic applause on her return, and both tracks (“I Don’t Know” and “Saratoga Summer Song”, respectively) were moving and thoughtfully rendered.

Wainwright returned in a chatty mood, showing the crowd his Vivian Leigh face and wishing them a happy Market Days, but he still had some serious music to perform. He dedicated “The Man That Got Away”, a Judy Garland number from his Rufus Does Judy at Carnegie Hall performance, to Liza Minnelli, who’s been quoted as saying she avoids Wainwright’s covers of her mother’s songs. Over a period-appropriate jazzy backing, Wainwright handled the song delicately, as if he were singing a hymn, each note masterfully placed up to the quietly climactic finale. He accepted the applause (and the first of three standing ovations) before carrying straight on into a rarely played, thrilling cover of his father Loudon Wainwright’s “One Man Guy” that flowed seamlessly into an emotional “The Art Teacher”.

For his first encore (and after the third standing ovation, his return was a given), Wainwright invited Adam Cohen back onstage to play “my favorite Leonard Cohen song” (apparently he’s sick of “Hallelujah”). The two traded verses on a sparse, heart-breaking “Chelsea Hotel #2”. When the crowd finished singing along to “Cigarettes and Chocolate Milk”, it seemed the show was over, but Wainwright answered the raucous applause with a second return trip and “Poses”.

The rarities he played certainly will stick with long-time fans, but the most impressive feature of the show was how the sometimes somber Wainwright appeared to enjoy the experience as much as the audience. After the third ovation, he cried, “It’s a good thing you’re standing! Stay there! I’m going to put my sunglasses back on—let’s have a party!” He boogied around the stage as he sang, smiling behind bright red sunglasses in the dark auditorium. When feedback interrupted a quiet verse of “Song of You”, he teased his fiancé (for whom the song was written and who was in the audience), “Are you on your Blackberry, Jorn?” before hitting the next note perfectly—always the consummate performer.

In “Out of the Game”, Wainwright sings, “I’m looking for something/can’t be found on the main drag”. That phrase aptly describes Wainwright’s impossibly agile voice, his rich back catalog, and most of all, the intensity inherent in several hundred people all glued breathlessly on one man — alone on stage playing the piano, leaning his head back, eyes closed, heart lost inside the music.