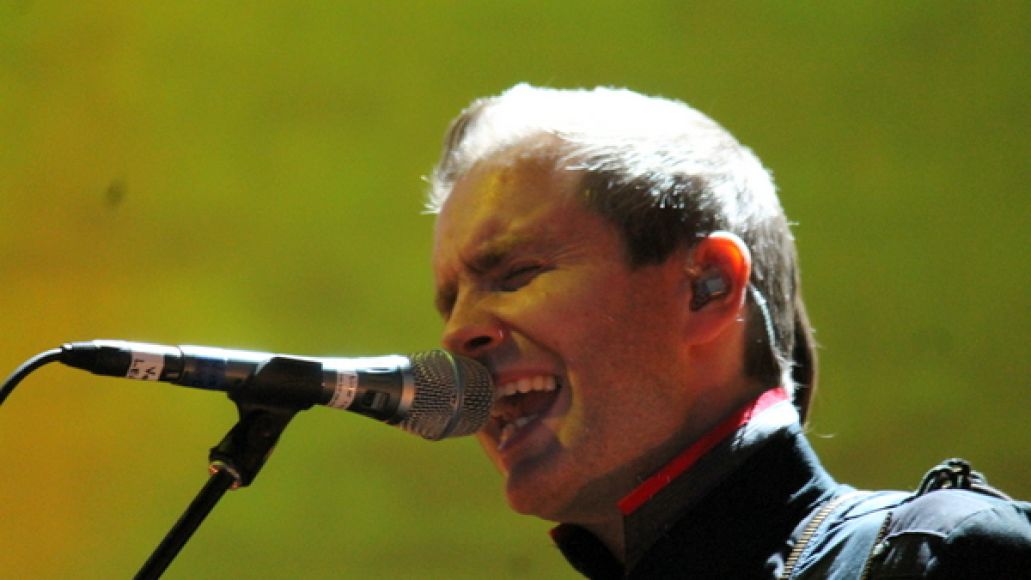 Ever since I first heard Valtari, I wondered how its minimalist malaise would translate to the typically dynamic and powerful live Sigur Rós experience. Songs such as “VarÃºÃ°”, which follow the archetypal Sigur Rós structure (mellow start–powerful build–glorious release) would surely do fine. Yet how would the band approach one of my favorite Valtari tracks, “VarÃ°eldur”, which inches forward slowly, building on the same repetitive idea and gradually intensifying to a plateau rather than a breakthrough?

The question remains unanswered, at least through the first three shows of Sigur Rós’s Valtari world tour, as only three of the eight songs from the album have been played thus far, and only two at the show in Brooklyn’s Prospect Park Tuesday evening. Getting the hauntingly beautiful but glacial “Ekki mÃºkk” and the expected “VarÃºÃ°” out of the way to open the show, Sigur Rós delivered a strong, nearly two-hour set that drew mostly from their earlier albums ÃgÃ¦tis byrjun, ( ), and Takk…, sticking true to their now classic sound and eschewing the minimalism of Valtari and the stronger pop/rock style of MeÃ° suÃ° Ã­ eyrum viÃ° spilum endalaust. 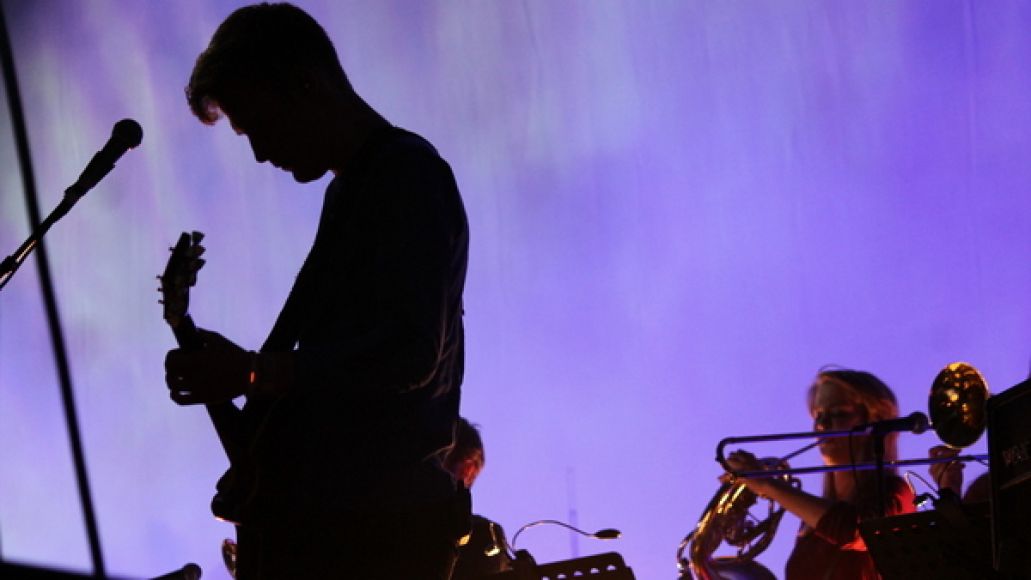 That’s not to condescend on the exquisite display of post-rock splendor, peaks of apotheosis, noisy and dark brooding, and inundations of warm electronic sounds that characterized the show. Yet one hopes that as the Valtari tour continues, they’ll actually play some more tracks from Valtari (“DauÃ°alogn”, another Valtari track, was played at the tour opener in Philadelphia in the first encore slot, replaced in Brooklyn by “Glósóli”, a welcome substitution).

Interestingly, the band chose to open with a song that epitomizes many of the potential difficulties of playing the Valtari tracks live. “Ekki mÃºkk” unfolded with lugubrious sloth, with occasional bursts of color from lead singer Jónsi Birgisson’s bowed electric guitar alongside static piano chords. Placing “VarÃºÃ°” so early in the set was another curious choice (it’s similarly early on the album), as the song shows great potential as a powerful end-of-set rager. The set closer was instead the wildly cheered “Festival” followed by the percussive bass of “Hafsól”. The former’s bare verses gave way to a huge four-on-the-floor buildup of tension that was finally released by drummer Orri Páll DÃ½rason’s wild cymbals, while Birgisson swung his head from side to side as they reached that apex, mouth agape in the joy of the moment. 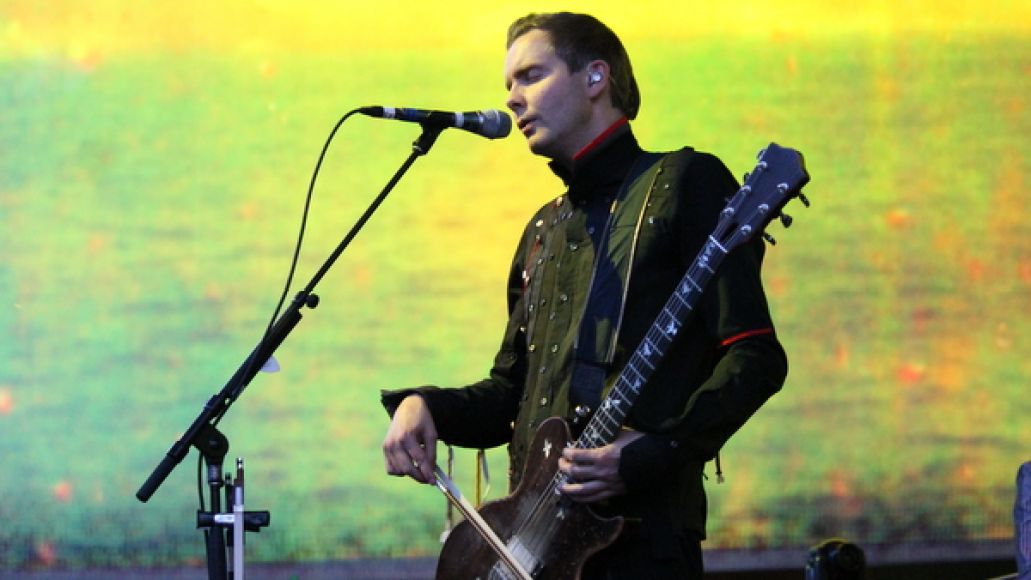 Ultimately, that was what Sigur Rós was after in Brooklyn: Delivering joy to their fans, both in sound and setlist. The band packed their set with beloved tunes, from the tranquility of “Vaka”, to the mellow rock groove of “Svefn-g-englar”, to the uplifting vibraphone riff of “HoppÃ­polla”. Before they reached into their bag of “hits”, things got dark and noisy during “NÃ½ batterÃ­”, and the harmonium/bells introduction to “Ã GÃ¦r” became carnavalesque, but in a psychedelic, Mr. Kite sort of way. Whoops and hollers suddenly emerged from the previously staid crowd on the first keyboard chord of “Vaka” and the opening ping of “Svefn-g-englar” got one of the biggest cheers of the night.

While the crowd showed anticipatory excitement, sometimes after the first note, and enthusiastic appreciation after every song, there was a weird balance between the urge to show how unbelievably stoked they were and the desire to quietly and serenely take it all in. Far from remaining stoic, the motionless crowd hung on every note, with many faces blissed out in rapturous contemplation. That didn’t stop a few hips from swaying during the jubilant “HoppÃ­polla” or its paired followup “Med blóÃ°nasir”. 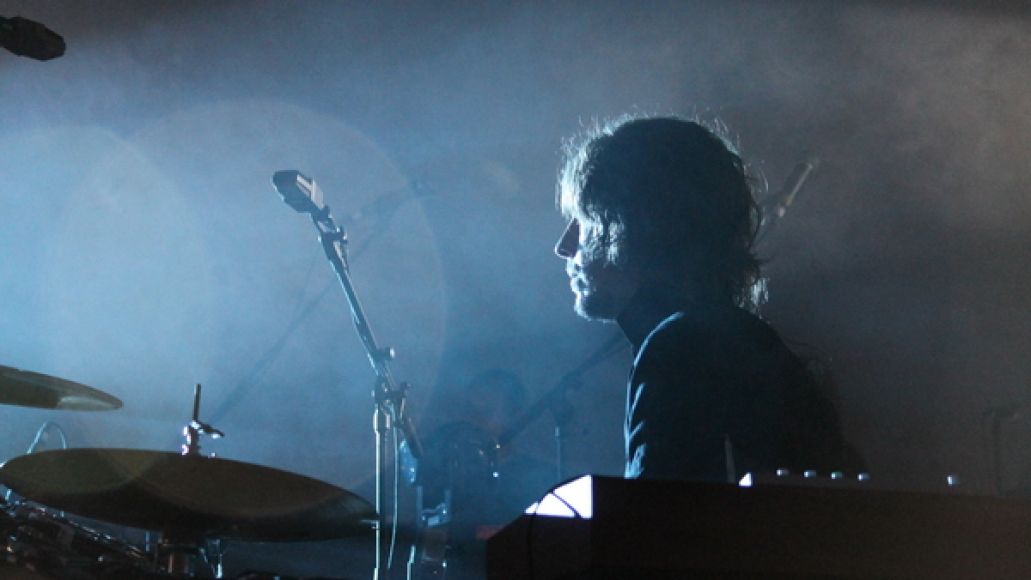 Noticeably absent from the stage were the cutting eyes and distinctive facial hair of multi-instrumentalist Kjartan Sveinsson, who announced a few months ago that he was “tired of touring.” Replacement musicians Ã“lafur BjÃ¶rn Ã“lafsson and guitarist Kjartan Dagur Hólm handled his role tremendously, still able to create the expansive, soul-filling sound that is essential to many Sigur Rós tunes.

While Birgisson agreed with Sveinsson that touring was “not very ‘creative,'” there were still moments of spontaneity and creativity, giving these songs additional life in concert, and reminding the crowd that, “post-” or not, this is a rock band. Perhaps that’s why Valtari received such short shrift. “SÃ¦glópur” achieved a rhythmic propulsion from the pizzicato strings and Birgisson’s staccato piano riffs, while some especially dissonant noise crept into the big minor key chord change in the center of “Svefn-g-englar”. And there was no more striking image all night than during the ejaculatory ending of “Hafsól”, when Birgisson frantically bowed his guitar and ripped the hair from his bow, practically throwing the axe on the ground. It was quite an exclamatory ending to quite a thrilling set.