“Well, I think of myself more as a song and dance man,” a young, smirking Bob Dylan once told a room of San Francisco press. Why not a fisherman?

Media and Zimmy diehards alike have nibbled on every little line that Dylan — or at least his PR team — has dropped since first announcing the release of Tempest, his 35th studio album. We balked at the high school Photoshop cover art. That can’t be for real. We soon set aside our justifiable skepticism regarding the 14-minute title track about the Titanic. Sounds good to me, and he name-drops Leo! And we just smiled and shook our heads as Dylan strolled through town in the video for “Duquesne Whistle”. What’s he doing out with a Gene Simmons look-alike in full Kiss makeup?

But the most tantalizing bait was that album title. Some ivory-tower stuffed shirt — or whoever got to Wikipedia first — noted that The Tempest was likely the last play that Shakespeare wrote alone. Hold those “thousand telephones that don’t ring.”  Would this be Dylan’s last record? And would this really be how the man who gave us Blonde on Blonde and Blood on the Tracks chose to go out — with the Kiss Army? Dylan soon dispelled the notion that this was his final time in the studio, but still, what to make of that title? Simply put, Tempest is the perfect storm of everything we love, can’t stand, and just shrug our shoulders about when it comes to late-era Bob Dylan.

Tempest delivers yet another collection of the ramblers that have populated Dylan’s records since Time Out of Mind. When his tight-knit touring band — Charlie Sexton, Tony Garnier, George Receli, Donnie Herron, and Stu Kimball — lock into a groove, the best of these songs (“Dusquesne Whistle”, “Narrow Way”, and “Pay in Blood”) swing, tumble, and glisten infectiously beneath Dylan’s lively rasp and growl. Everything about opener “Duquesne Whistle” — from its old-timey preamble and driving chug to Dylan’s ragged urging of “Listen to that Duquesne whistle blowin’” — glows brightly and suggests that Dylan still has plenty of track ahead of him. “Early Roman Kings”, on the other hand, never finds its legs, hobbling on an oscillating accordion part that grows grating after only a few verses.

On much of Tempest, listeners are guided by a still-yearning Dylan through a depraved and slouching world whose center cannot hold — or maybe it can, and that’s what’s gone so terribly wrong over the years. “Scarlet Town”, thematically reminiscent of “Ain’t Talkin’”, teeters on Donnie Herron’s banjo as Dylan depicts life in the type of place where you “put your heart on a platter/ and see who’ll bite.” The dark environs of gentle ballad “Soon After Midnight” reveal Dylan “standing in the doorway cryin’” all over again, his voice still able to conjure a gravelly sweetness on a line like “It’s soon after midnight/ and I don’t want nobody but you.”

Closing numbers “Tempest” and “Roll on John” drew the bulk of pre-release curiosity, thanks to press releases teasing with promises of an epic narrative of the Titanic’s tragic voyage and a tribute to John Lennon, respectively. Despite Dylan being in excellent voice, the nearly 14-minute “Tempest” (unlike its bloody nine-minute predecessor, “Tin Angel”) proves little more than an endurance test, the sheer duration and repetitiveness of the song making its final fade-out an act of mercy. While critics are rightfully praising its poetic ambition and inventive storytelling, most listeners will only stow away on this voyage with Dylan once or twice before abandoning ship for good.

“Shine your light/ Movin’ on/ You burn so bright/ Roll on, John,” sings Dylan on the more accessible “Roll on John”, which pieces together bits of Lennon biography with lyrical excerpts from Beatles songs like “Come Together” and “A Day in the Life”. But maybe the most important allusion here is the final verse’s reference to William Blake’s “The Tyger”, a poem in which the speaker poses questions about the tyger’s creator. And Tempest really feels like Dylan’s tyger—beautiful, frightening, and altogether strange. But it’s all his creation, and that’s the point, really. Whether or not we are willing to weather all of Tempest with him, Bob Dylan rolls on. 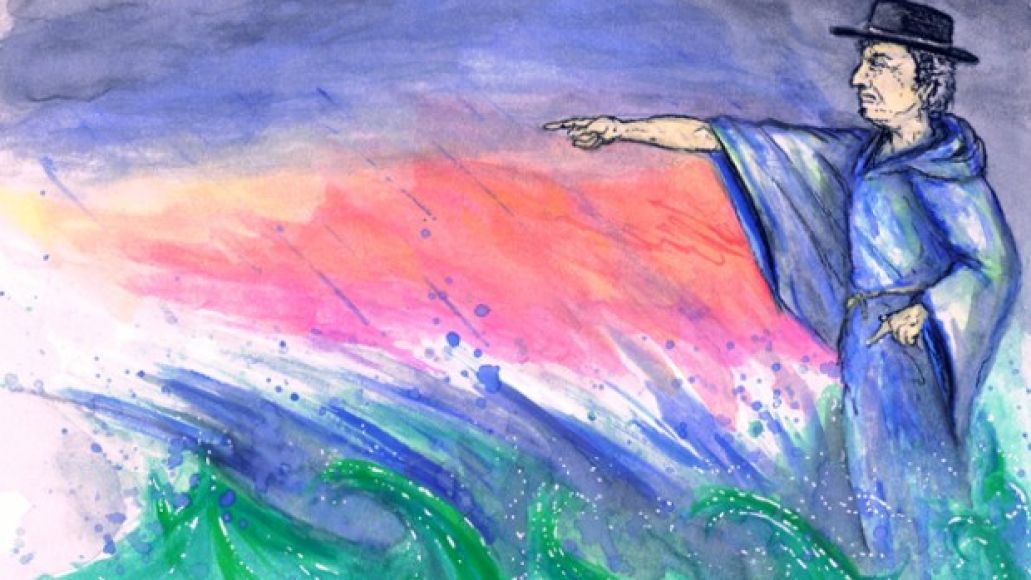