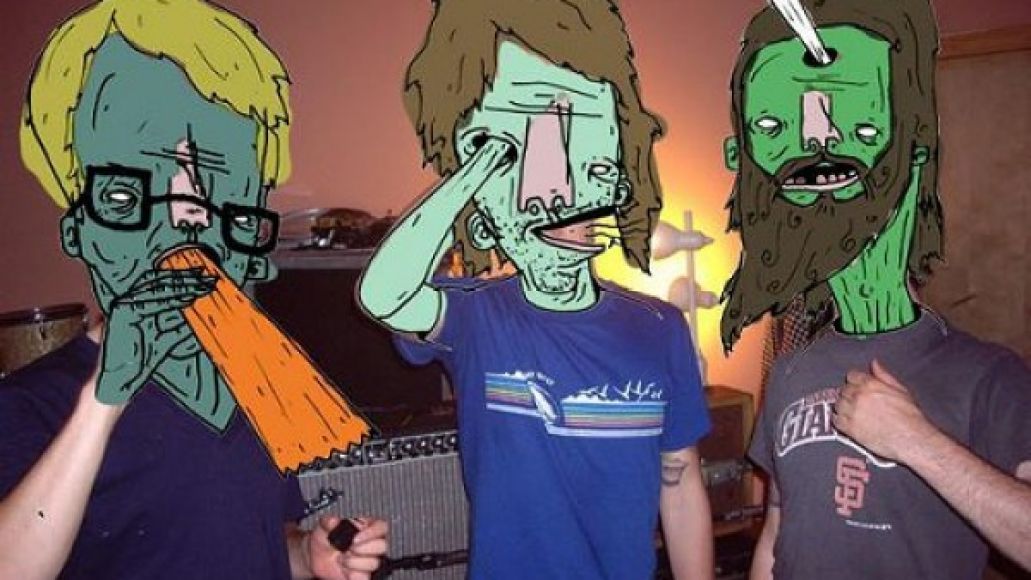 There’s a scene in the Johnny Cash biopic Walk the Line where June Carter (played by the adorable Reese Witherspoon) asks Johnny Cash (played by the even more adorable Joaquin Phoenix) how Cash and co. got that sound, the one that’s “sharp like a razor, steady like a train.” In a truly “aw-shucks” moment, Cash gleefully responds, “We’d play faster if we could.”

That’s sort of the way it is with Toronto noise-punk trio METZ. Their blend of punk is angsty and visceral to the point of being poisonous; its defining factor, though, is the volume, wave after wave of near-solid wall of pure dissonance. But as vocalist/guitarist Alex Edkins admits, it’s forged in line with the Cash-ian method of an unremarkable approach leading to something truly remarkable. “Our music is just what happens when the three of us get in a room together,” Edkins says. “It’s the most cranked up thing, but also the most natural thing and automatic.” Even their name is underwhelming, despite connotations to The Amazin’s. “No funny stories or no randomness; it’s just non-sensical,” Edkins adds. “Very short and snappy, like the music.”

The band, which also includes drummer Hayden Menzies and bassist Chris Slorach, formed a few years back in their hometown of Ottawa. In 2009, they departed for the big city of Toronto, releasing a slew of 7″ singles and gaining heaps of buzz thanks to their frenetic live shows. It’s the sort of experience that evokes old-school punk shows: the mayhem, the sweat-drenched mosh pits, and the sense that things could pop off like a powder keg at any moment. Still, Edkins coyly admits that he doesn’t understand the hype. “I’ve seen some crazy shit on stage, and our theatrics can’t come close,” Edkins says. “We’d have to end up lighting a motorbike on fire. We just go for sheer volume and play the shit out of our instruments.”

Not that Edkins would be overly aware. According to him, his stage presence is part screaming beast, part blackout. “I am either zoned in or zoned out,” Edkins says. “I’m completely automatic an hour beforehand. It’s the funniest thing, but it’s the only way I’ve done. To shut down a little inside. I don’t know how to open up to people; I get freaked out. But I have no problem doing it on stage.”

Done it they have, with their stage show garnering the band primo opening spots for some true punk royalty, including Archers of Loaf, Death from Above 1979, NoMeansNo, and Oneida. Aside from “being shocked and inspired simultaneously,” they’ve learned a valuable lesson on the road. “Mission of Burma never got their dues, but they didn’t change one damn thing, ’cause it’s about the music,” Edkins says.

And the crowds have reacted almost immediately to their unrelenting sound, finding an energy all too familiar to the punk faithful but one that resonates deeper than stomping around and throwin’ bows. “The way we play, what we do on stage, it’s resonating with people,” Edkins says. “That means we have something in common, a camaraderie, which makes me very happy. It’s a good feeling, a positive thing. It’s not just another punk show.”

That’s probably because METZ isn’t just another punk band, displaying a kind of presence and individuality without forgoing a primal sense of interconnectivity. Edkins readily admits there are few bands they feel a musical kinship with, despite love and overwhelming respect for the rich and diverse Toronto punk scene (Edkins recommends The Soupcans, Teen Anger, and Telephone Explosion as must-listens).

“The three of us are very similar, we grew up in the DIY punk scene,” Edkins says. “It’s more of an attitude or how bands go about things, though. That’s what we took from going to shows: an uncompromising way of making music.”

And to them, uncompromising means being unafraid to be self-assured and utterly dedicated to their sound and their skill and ability to make it. “We only use two amps and a drum, but we make triple the noise that those other guys can make,” Edkins says. “Less is more, and there’s something pretty about a guitar, bass, and drum.” 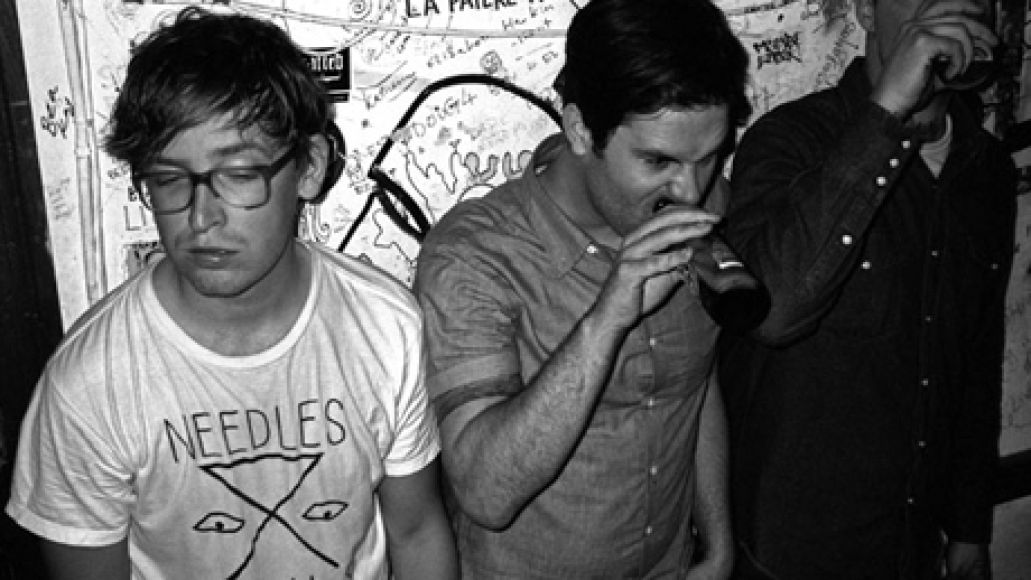 It also means being unafraid of going outside the “punk mainstream” and forging music based on anything and everything you love musically. “It bugs us, to be lumped into categories, but it is undeniable,” Edkins explains. “But it’s not where we’re coming from. We’re into songs that are loud and heavy, but that’s not what we’re really listening to. We listen to indie rock and hip-hop (Edkins’ favorite rap album: Biggie’s Ready to Die). We listen to metal; people might not assume we do, but we could listen to metal all day. It seems crazier to stick to one style and do it till you’re sick of it. It makes it easier for the interview, but it’s nothing like that.”

Aside from far more diverse iTunes playlists, that independence breeds a particularly profound sense of dedication, a level already heightened after years of life in the punk scene. It’s that sort of commitment and unwavering focus that led the band to approach iconic indie label Sub Pop with their demos. “It was them (Sub Pop) or put it out ourselves,” Edkins says. “It wasn’t do or die, but it may have just been our teenage minds talking.”

Thankfully, the folks at Sub Pop liked what they heard, signing the band this past May and handling the release of their debut self-titled album on October 9th. As one of indie’s most influential labels, Sub Pop seems like the perfect place for the band, even if, once again, they don’t truly understand why. “They’ve done it all: Melvins, Dwarves, Bleach,” Edkins says. “A couple people have said that we remind them of the old Sub Pop. It’s a huge compliment to invoke that sound, because we listened to the stuff and it’s an influence, but that’s not our intention. Still, it is a teenage dream coming true.”

Fantasies or not, the boys are dedicated to being professional musicians and not gushy fan-boys — except for that one time they went bowling with Mudhoney frontman Mark Arm. “I didn’t know what was going on,” Edkins adds of the joyous occasion. “It was a nightmare, brutal. I hurt my neck”.

After striking out, the band set to work in the studio. Save for a few bumps, the early stages of recording went smoothly thanks to the trio’s earnest communication process (something Edkins insists is a benefit of a smaller band, one without the need for “spreadsheets or some logistics.”)

“At first, it was a pretty confusing process, getting the songs and putting them down on tape,” Edkins says. “But there was no rush, like we’re doing this for the sake of our friends. We wanted to do it so we dig everything. I think it helps to be 100% into the band. Everyone is totally involved, totally pumped on the record and into the band.”

Still, their stronger-than-blood bond does have its downsides, something they learned as the entire recording ordeal dragged on and on. What had shucked off labels and communities and brought them to the promise land was a slow-moving creature that siphoned off time and patience. 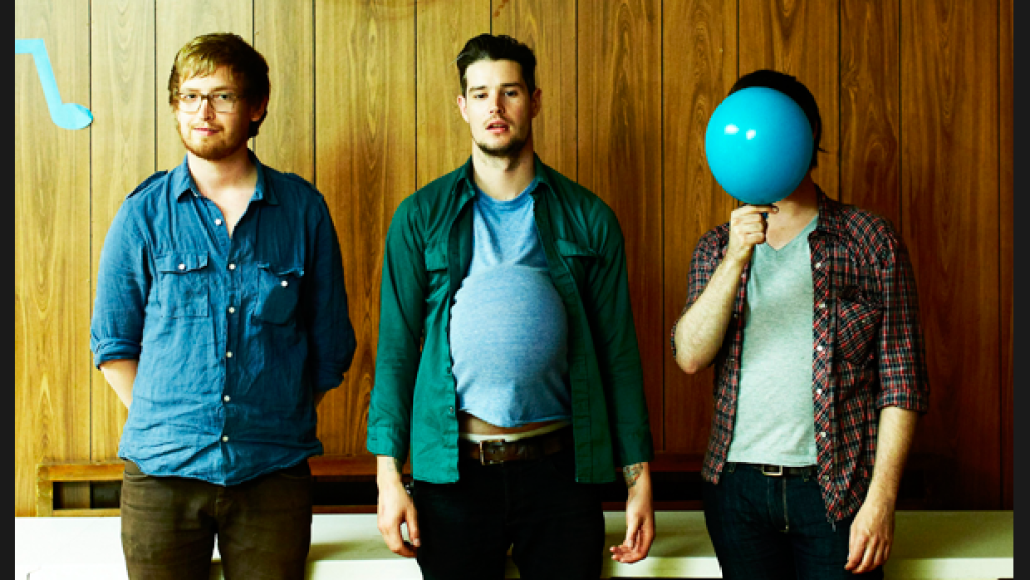 “We’re definitely into songcraft, but we’re not overdoing it,” Edkins says. “We still want that immediacy, which is why we took as long. It’s just a symptom of writing as you go. We write together; that’s 90% of what ends up on the record: complete collaboration. It’s another reason it takes so bloody long. You can always write a better song and we’re always open to changing.”

Whether they can ever do better or not, the band has accomplished something pivotal, an album that simultaneously reflects their chaotic live show and hours of time spent in the studio honing the sonic anarchy. First and foremost, the band realized they could never duplicate what they do on stage, even if other acts claim their albums do just that. “The live show is a crazy thing,” Edkins says. “But as exciting as it is, nothing can replace it.”

Rather, the band did their best to stimulate the live show while dropping hints about a greater, more destructive energy waiting for those brave enough to see them on stage. “We wanna be in and out,” Edkins says. “Put on the record, get your head blown off, and it’s over before you know it. But we also try to mess around with different sounds. We want everything, but don’t expect, like, French horns. “

Expect, instead, quite possibly the most malicious aural assault you’ve ever purposefully spun.

Over the course of 11 songs, just shy of 30 minutes, the band never lets the volume drop for long, but find increasingly interesting ways to contort and mutate it. “Rats” is perhaps the album’s most thrash-tastic cut, a ferocious and uncompromising double shot of snarling guitars and explosive drums. Together, they make a destructive noise akin to the swan song of some industrial-grade blending machine chopping up scrap metal. As the album opener and lead single, “Headache” seems to be less abrasive, opting more for accessibility and only a half-hearted kick to the face to introduce listeners. Despite its slender build, its stop and go, borderline manic beat is a perfect starting point, not to mention an excellent base for Edkins’ equally disturbed vocal stylings.

But the true stand-out track, the one deserving of the shiniest gold star for noise-rock prowess, is “Wasted”. The record’s longest track at some four minutes, it’s the sound of Blur-ian Britpop turned up beyond the manufacturer’s warning, a rage-filled condemnation of drunkenness meant to obliterate rather than comfort and console.

After taking their time with the record, the band aims to speed up their activity starting now. “The plan is to do lots of touring and keep the output at the maximum,” Edkins says, adding they already recorded a new 7″ to accompany the LP. “The process is pretty slow, but we want to write and record as much as possible.”

It’s hard not to root for these guys. Like the real-life Johnny Cash knocking on radio station doors, all they seemingly want is a chance to play for people, to be the masters of whether or not they’ll be cheered or booed. It’s safe to say they’ve had plenty of the former, not to mention more than their fair share of luck. But even when things don’t go their way, METZ proves that enthusiasm goes a far toward achieving their dreams of melting faces and annihilating eardrums.

“Until now, lots of our touring has been pretty occasional; Hayden wasn’t even allowed in the U.S. until just recently,” Edkins says. “He couldn’t step foot beyond the border for five years, so we’re glad that’s behind us. This is a new thing for us, and we’re pretty excited for that.”