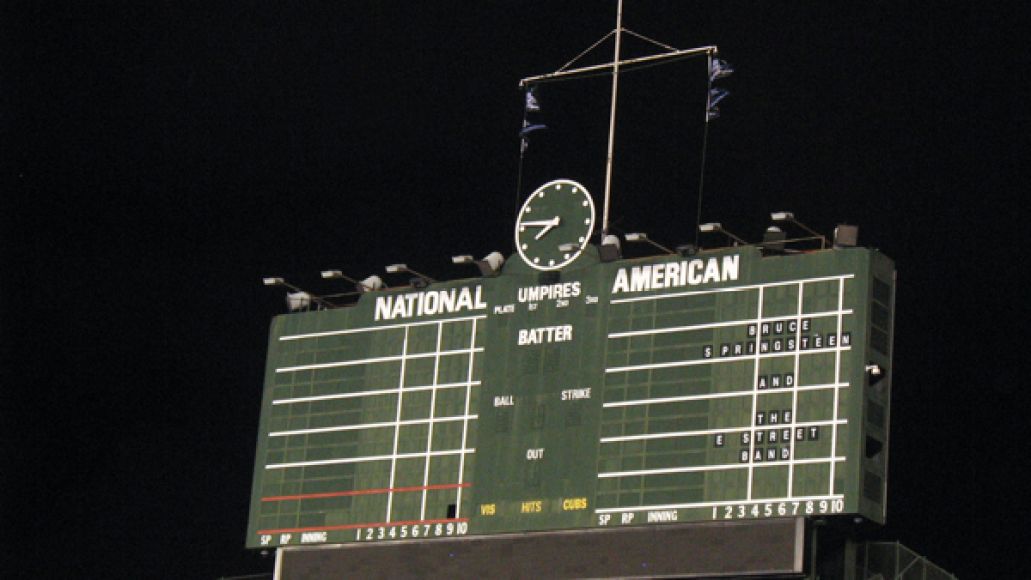 On Friday night, Bruce Springsteen and the E Street Band kicked off the first of two sold-out nights at Chicago’s Wrigley Field with a three-and-a-half hour setlist spanning 28 tracks. Diehard fanatics know that number and time is almost commonplace — especially his more recent Finnish audiences  – yet The Boss kept things titillating by offering up tour debuts, inviting a “cavalcade of stars,” and attempting to be the most humanistic rock ‘n’ roll frontman alive.

That last part might be hard to stomach for a few, but it holds some weight. Save for maybe Dave Grohl, there isn’t a rock ‘n’ roll artist out there like Springsteen that loves his (or her) own music as much as his (or her) own fans. The New Jersey legend is just a different breed altogether; a greying scholar in performance, style, and substance. Right off the bat, Springsteen played to the ravenous crowd, who were 17 sheets to the wind by the time the band lurched through a studio-stripped rendition of”Hungry Heart”.

Disclaimer: Remember, this is the land of a million drunks, AKA Wrigleyville, where a healthy chunk of Chicago go to root for (and then curse) what is arguably one of the most depressing baseball franchises in the history of the game. 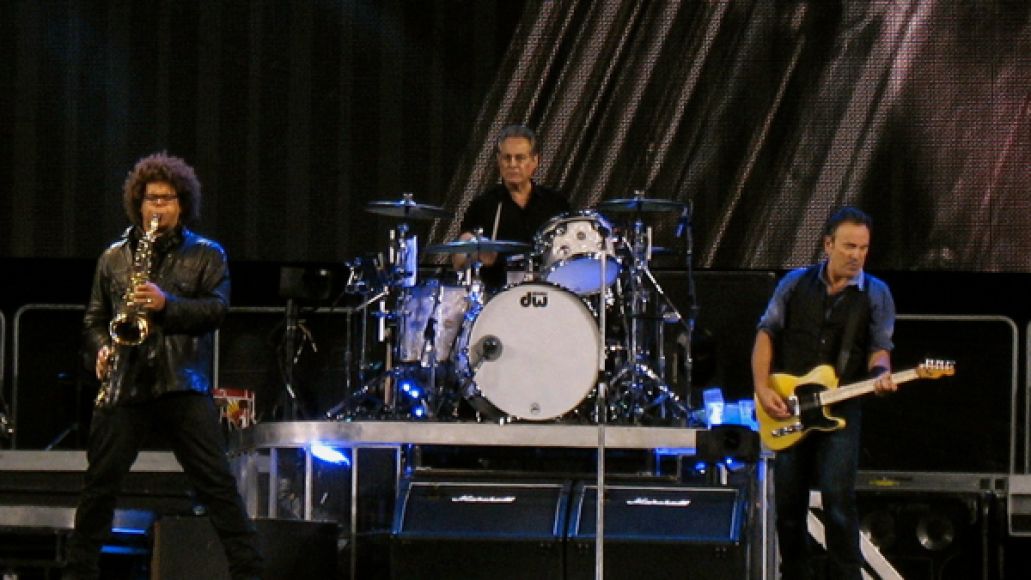 Some habits do tire and Springsteen’s incessant need to channel this psuedo Baptist preacher of his atrophies quick. His breathy introduction to “Spirit in the Night” (“Can you feel the spiiiiiiiirit?”) felt slightly pandering, while the extended roll call in “My City of Ruins” bordered on parody. Still, at nearly 63 years of age, he’s the best at what he does, and his act hardly ever feels rehearsed. Even when he’s doing traditionally kitschy things like roping people up on stage or stalking the crowds, there’s a sense of authenticity he inspires.

During the bonafide tearjerker “Waitin’ on a Sunny Day”, a young girl holding a cardboard sign with the song’s title was brought on stage by Springsteen. When he handed her the mic to sing the chorus, her eyes popped back to her parents, and her smile was enough to power a small city. Much later, during a gleefully urgent cut of “Dancing in the Dark”, Springsteen laughed at one husband’s sign that read: “Please Dance With My Wife.” He couldn’t turn down the offer and so he pulled said wife up on stage and the two shared what was probably Springsteen’s millionth dance to date. Yet never once did this all feel premeditated.

It also helped that the E Street Band sounds like the E Street Band again. Earlier in the year, the group experienced dire growing pains, which made sense given that a key member like Jake Clemons, filling in for his late uncle Clarence, was still warming up. At this point on tour, there’s hardly a song without his contributions, which really do mirror Clarence’s past trademarks. Let’s just say that anyone who can nail “Jungleland”, without a doubt the legend’s finest moment with the band, can do just about anything. When the request for the Born to Run closer filed through the crowd, and Springsteen went for it, Jake assumed the task and scored with ceiling-shattering marks. 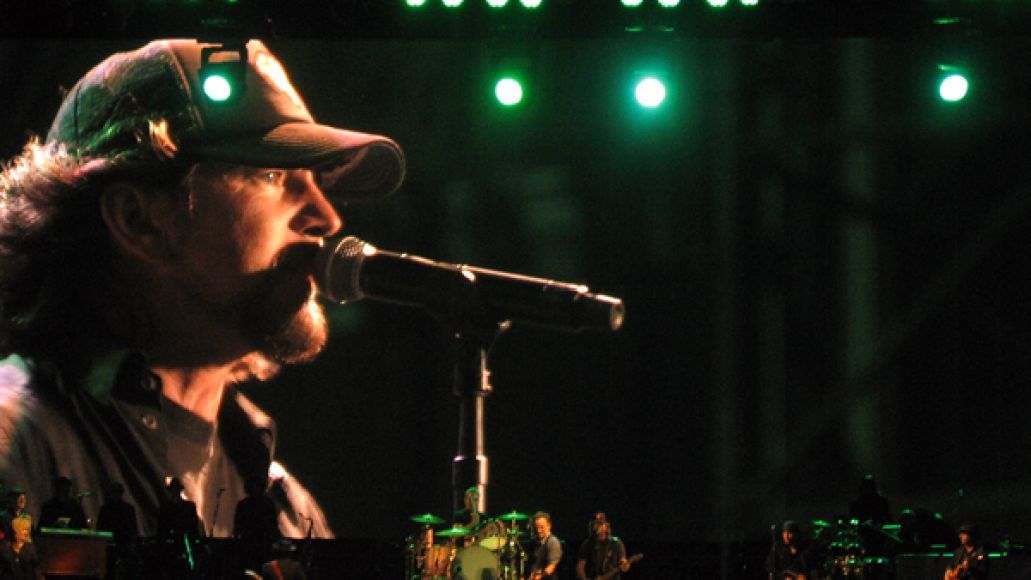 But what isn’t a true Springsteen show without its share of surprises. Kicking off with the original 1978 version of “Prove It All Night”, featuring the extended heartfelt introduction, hinted of greater things to come. Like, say, appearances by Tom Morello and Evanston native and major Cubs fan Eddie Vedder. While the former has been more or less an unofficial member of the E Street Band all throughout 2012, the latter was a genuine shock. When the Pearl Jam frontman sauntered out for the band’s electrified version of “Atlantic City”, the ballpark wouldn’t shut up — this writer included.

“I think I’m starting to steal from Justin Bieber’s audience,” Springsteen observed, following the band’s unorthodox encore, which was essentially them standing at the lip of the stage for less than a minute, only to retreat back to their respective instruments. A quasi-forgettable performance of “We Are Alive” wasn’t what the admittedly youthful crowd had hoped for; however, what came next is probably giving a heart attack right now to any Springsteen fan who couldn’t attend.

That famous harmonica signalled Springsteen’s literary epic “Thunder Road”, which led into the always-dependable “Born to Run”, which then segued into an extended, deeply emotional cut of “Dancing in the Dark”, which bled into an overwhelming surprise appearance of “Jungleland”, which — deep breath — evolved into “Tenth Avenue Freeze-Out”. Because that wasn’t enough, Springsteen called forth his ’90s all-stars, adding with finality, “C’mon, we’ll send you all home dancing.” The next ten or 12 final minutes found the E Street Jamboree innately paying homage to the city’s crown cinematic jewel, John Hughes’ Ferris Bueller’s Day Off, by covering “Twist and Shout”. Many sang, everyone danced. 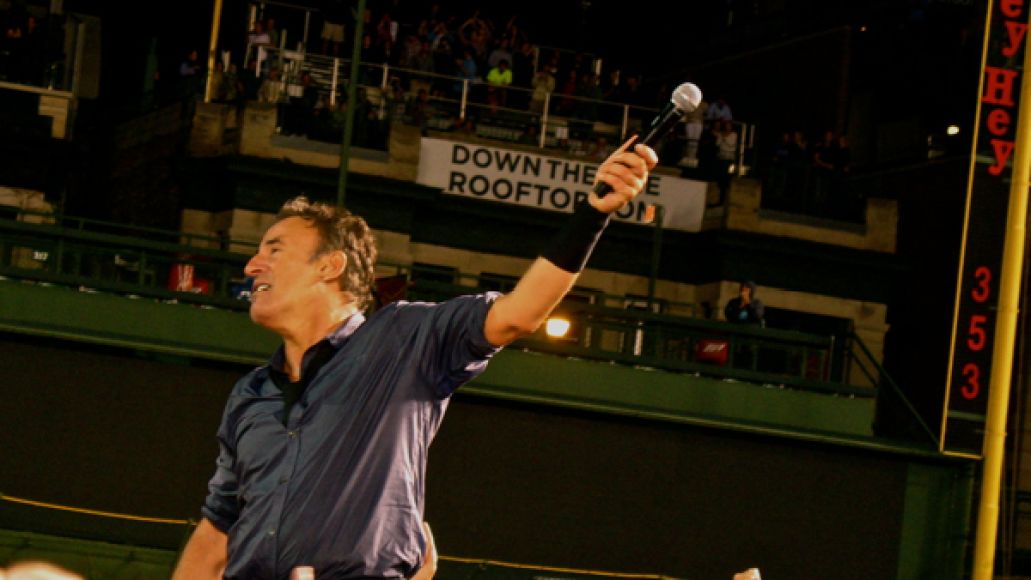 These are just simple truths: Those who paid scalpers $10,000+ for premium seats got a premium deal. Those who didn’t know “Shackled and Drawn” from the tour debut of B-side “None But the Brave” walked away satisfied. Those who came just because their friends scored tickets from their parents and, okay, they think they heard “Dancing in the Dark” at their orthodontist’s office once or twice before, walked away diehard Springsteen fanatics. Nobody left disappointed, not even the mummified fan who felt compelled to start chewing dip amongst the thousands also trying to leave the stadium. Yeah, he’ll wake up looking for his copy of Greetings from Asbury Park, and no, he won’t find it, but it’s that urge that counts.

The punch line? This was only Springsteen’s first night in Chicago.

Bruce Springsteen & The E Street Band Setlist:
Prove It All Night (’78 Version)
My Love Will Not Let You Down
Out in the Street
Hungry Heart
We Take Care of Our Own
Wrecking Ball
Death to My Hometown (w/ Tom Morello)
My City of Ruins
Spirit in the Night
Trapped (Jimmy Cliff cover)
Jack of All Trades (w/ Morello)
Atlantic City (w/ Eddie Vedder)
Lonesome Day
I’m Goin’ Down
Darlington County
Shackled and Drawn
Waitin’ on a Sunny Day
None But The Brave
The Ghost of Tom Joad (w/ Morello)
Badlands (w/ Morello)
Land of Hope and Dreams (w/Morello)
Encore:
We Are Alive
Thunder Road
Born to Run
Dancing in the Dark
Jungleland
Tenth Avenue Freeze-Out (w/ Vedder and Morello)
Twist and Shout (w/ Vedder and Morello)