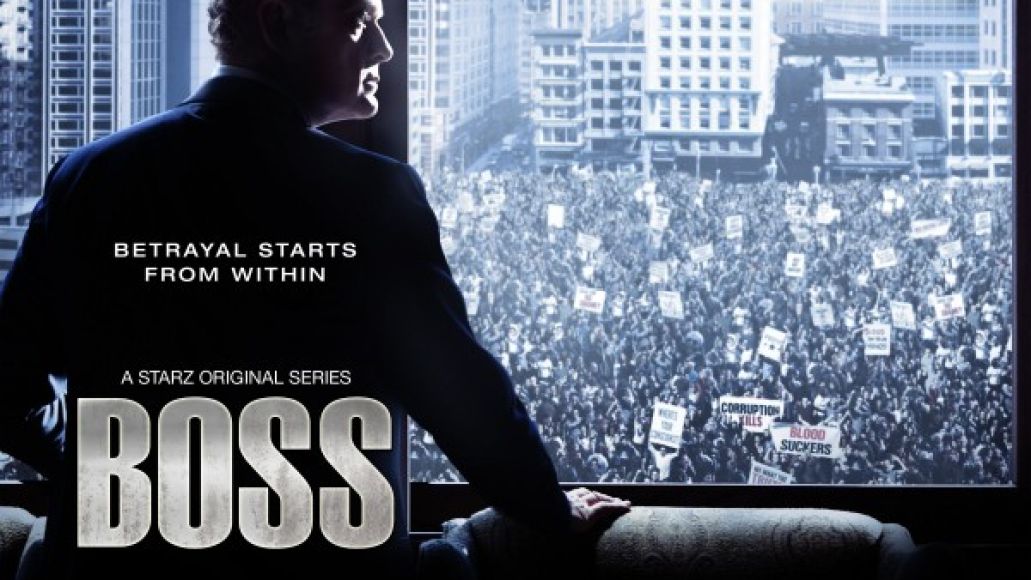 Last month, Starz’ political drama Boss ended its second season premiere with an original song from My Morning Jacket frontman Jim James. While subsequent episodes have featured contributions from Shearwater and Mark Hollis’ first music in over 14 years, episode seven features a double-header of the returning James and French space-rock duo Air. Edited together, James’ “Tell Me What You Saw” and Air’s “The Conversation” are two movements of the same cinematic saga, a slow-building and meticulous blend of bluesy piano, sweeping strings, and a dash of background echo/fuzz that hint at something insidious on the horizon. The episode featuring the songs airs tonight (9/28) on Starz at 9 p.m. EDT (stream each episode after it airs here).

The mastermind behind both indie-centric offerings is Brian Reitzell, the show’s music supervisor/in-house composer. Before his full-time work as a supervisor, Reitzell was the drummer of punk band Redd Kross as well as a touring member of Air’s backing band. Since the late ’90s, Reitzell has composed or supervised on a slew of film projects, including The Virgin Suicides, Lost in Translation (alongside My Bloody Valentine’s Kevin Shields), Friday Night Lights, Thumbsucker, The Brothers Bloom, and Peacock. Reitzell is also a member of electro-pop band TV Eyes alongside Roger Joseph Manning Jr. (Beck, Air) and Jason Falkner (Jellyfish).

CoS recently sat down with Reitzell, where we discussed his process behind enlisting his favorite indie acts, working in the studio with James, his thoughts on the music supervision field, bringing Hollis out of retirement, and much more. Check out the conversation in-full below. 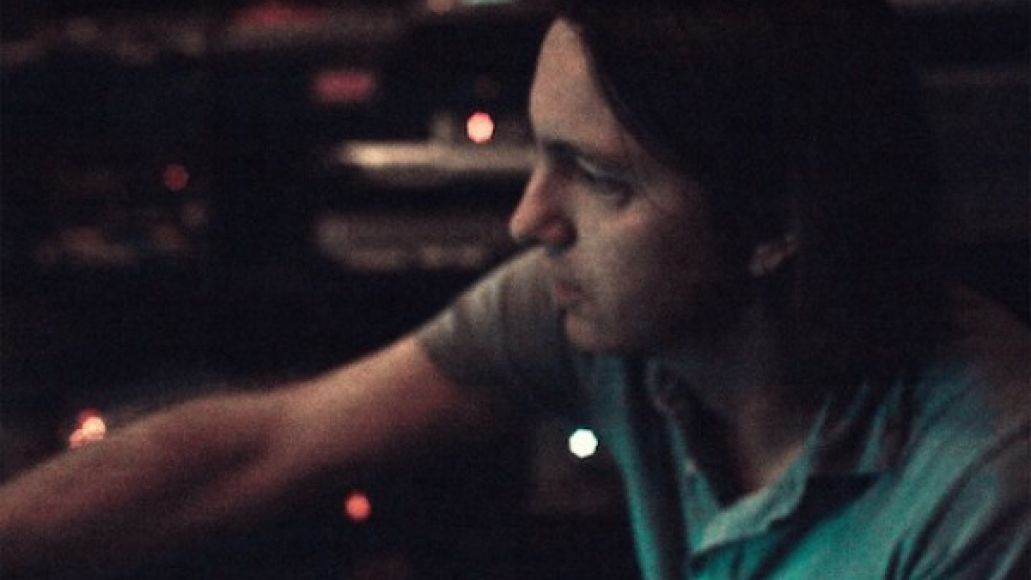 Can you talk a little about how you approach your work with composition and music supervision in general.

I come from a band, and it’s all a collaboration. I never set out to be a composer. I tend to bring in people that I have never worked with. Sometimes I do more of it and then see what they bring to it. It helps me grow and it feels like being back in a band for a time. I also like to get inside their music, and sort of know them in a way. With Boss, I developed a system of doing the show’s music that’s like doing film. We watch the entire rough cut and the music usually starts in the last scene. Music that can work outside the show and within the show. My friends used to be my heroes, but now those heroes are directors of movies.

Who is your biggest influence not only as a musician, but as a composer?

Robert Normandeau and that electro-acoustic sound. Robert’s trip is blending everything in exactly where is needed to be.

You seem to have a very Zen-like approach to music supervision and composition. What do you see as the main goal or job of any good composer or supervisor?

Music supervision is about serving the master, making that even more of an emotional experience. Music serves the show the way it needs to be served. To give it that something more. There’s too much bureacracy and BS behind music supervision. Usually, they have them singing in the background, which is not very elegant. It’s not helping the story or process, and there’s this informtion overload going on. It’s about having things that are most appropriate, not the most gratuitious. Every project has a different sound. Friday Night Lights is football in West Texas. It’s about putting the audience in that place. Explosions in the Sky sound like that place to me. I put songs in because it was meant to be there. I’d never want to disrespect someone’s music.

You worked with Jim James a few times for music on the show. How was the collaboration between the two of you? And what about between you and Air?

Jim James and I made a ton of music very quickly. The (first) epsiode with Jim’s music is called “Louder Than Words”. And I used Jim’s voice more as an instrument, which makes this more a piece of music than a song. His voice is running through an analog synth, so his actual voice blends in with the sounds of the knobs. It’s actually very trippy, like it sounds like dementia. With Jim James, we use him as a thread, as a connection, because it’s often too deep for TV. He’s unlike any other human being I’ve worked with. He doesn’t arrive at the note, he just sort of scoops into it. He puts his personality into it. Air grew up in Versailles, I grew up in NorCal, but Air is like my brothers.

You got one of your alleged heroes, Mark Hollis, to emerge from his shell for this show? What was that whole process like?

Mark Hollis retired from doing music. I talked to Mark a few years ago and we remained in contact. I wanted him to work on a project, but the director has to get it and deserve that accomplishment. Mark’s track is specifically for the show, not to be taken out of context, which is why we never released it. He came out of hiding just to be involved.

What was the motivation behind some of the musical choices made within the context of the show?

The show is very dark and haunting, but it’s set in Chicago. People wanted me to a some more blues-y stuff, but that’s some cliched bullshit. So I did a remix of Robert Plant’s “Satan, Your Kingdom Must Come Down”. We try to cut the songs into different parts and weave them into the fabric of the show to contribute to the score.

What do you think draws in or appeals to acts like Jim James or Air getting involved with composing music for TV/movies?

Now it’s really cool for indie acts to score movies, because Trent Reznor has validated it by winning Oscars. These guys don’t have rules and cliches and formulas. Using the platform for TV, it’s another way to get exposure for them. If someone see’s this show, a new label perhaps, it’s another way to exploit themselves. Musicians generally like the idea, and they don’t need any more of a prompt. Who doesn’t love great movies or servicing the greater picture?

How does your work for TV shift from some of your work in Hollywood movies?

Really, I’m a film guy. I have 18 hours of Boss to fill; that’s more than nine movies. But you get this whole arc, this very organic development of sound. TV is a writer’s medium, where you get this long arc and lots of character development. And then everything gets wrapped in a tight little bow. For a TV show, you’re lucky if you get two weeks. The medium of TV doesn’t allow what I do. A lot of it is made in a cubicle with a bunch of software. Only my resources let me do what I do for Boss.

How do you feel about the field of music supervision in general? What do you think other shows are doing right/wrong and how do you think the work on Boss compares?

First, it’s not about when, it’s about now. You don’t have to be at home to watch, you can do it whenever you want to.Music is so undervalued. TV nowadays is bullshit because it tells you exactly how to feel. I want to make music more appreciated in TV. So much of music supervisions is just to exploit, for someone to put something on to tie themselves to. Like, Entourage has one song in the whole credits. And Weeds has one basic song covered by a diferent artist. Calling the episode the title of a song is just ass backwards. Downton Abbey is one show doing it right; it’s like one long-playing opera.

Does the audience’s taste play an impact in some of the less-than-savory choices made in TV music supervision?

When Friday Night Lights was turned into a TV show, the sound we had developed was turned into this cheesy, watered-down music. People don’t seem to really care, and the audience doesn’t get it, doesn’t care. TV is very one-dimensional. People don’t get the chance to use their brains, and they have to go where the producers tell them.

Why do you think it is that you do what you do, making sacrifices and working so diligently on the show?

I guess what I’m doing is just making less money while I give myself more work to do. It’s satisfying for me, which is what I want to do. I don’t know where to go from here, no idea what’s ahead in the future. But I am so excited.

New Music: Jim James - "Tell Me What You Saw" + Air - "The Conversation" (CoS Premiere)