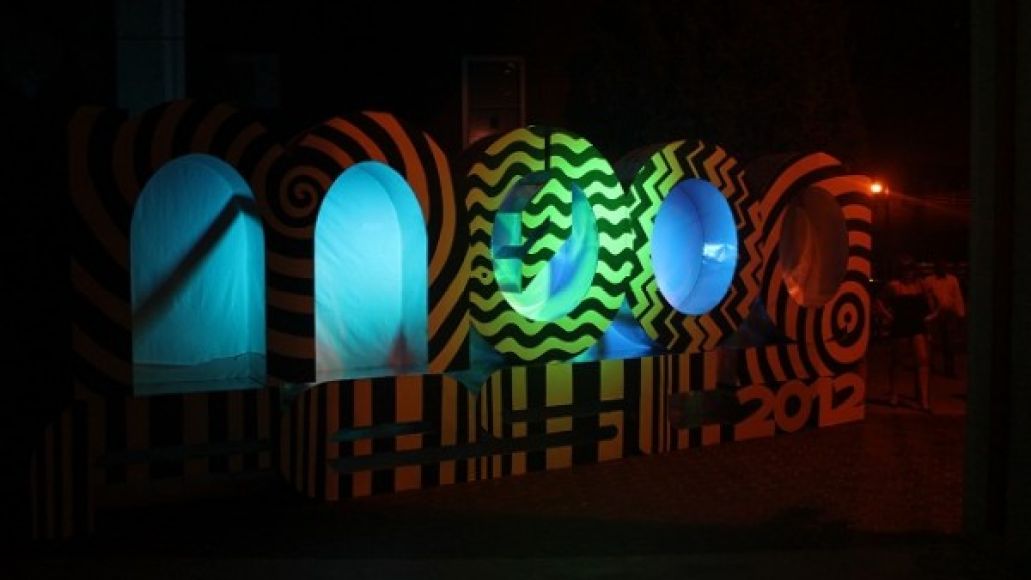 The walk between Moogfest’s U.S. Cellular Center and the much more intimate Orange Peel is approximately 18 minutes. Not too bad in festival terms, and instead of battling the hoard during that time, the hike is better spent grabbing a handmade crepe, petting some puppies, watching a few buskers, indulging in some fine chocolates, and/or sharing some stories over a microbrew with a local. Okay, so maybe the walk can end up taking closer to an hour.

That is part of the charm around Asheville. Void of the chains that clutter most downtown skylines, Asheville runs at its own comfortable pace. Unlike major metropolis like Chicago, New York, Miami, and L.A. that seem to frown on the influx of visitors for music festivals, Asheville locals are inordinately helpful; always down to give directions and even offer a few recommendations based on the route. Major streets remain barricaded yet the city acts over-joyed to host thousands of wandering, costumed miscreants. The actual performances don’t start until after 7 p.m., but attendees converge on the downtown area early to grab lunch, check the work of the city’s many artisans, pick up a few extra essentials for a Halloween outfit, or peruse the Moog Factory and the multiple nearby record shops. All of this brings valuable funds to the area, which helps maintain the beauty and public art spaces.

Bob Moog may be best known for the technological advances he made to music, but like the city which houses his factory, it is based in a simplified beauty. Take a moment to examine the Minimoog Voyager Old School; it has dozens of knobs and is capable of making thousands of sounds, yet it does so much within a handsome, compact casing. This aesthetic is also the base for the type of artists that perform each year to celebrate Bob Moog. The lineup is diverse, but all of the talent is humble in their boundary defying abilities. Not all of the artists in the 2012 installment employ synthesizers as a major live tool, but there is a shared appreciation for the crossroads of art, technology, artistic freedom, and the subsequent synergistic beauty. 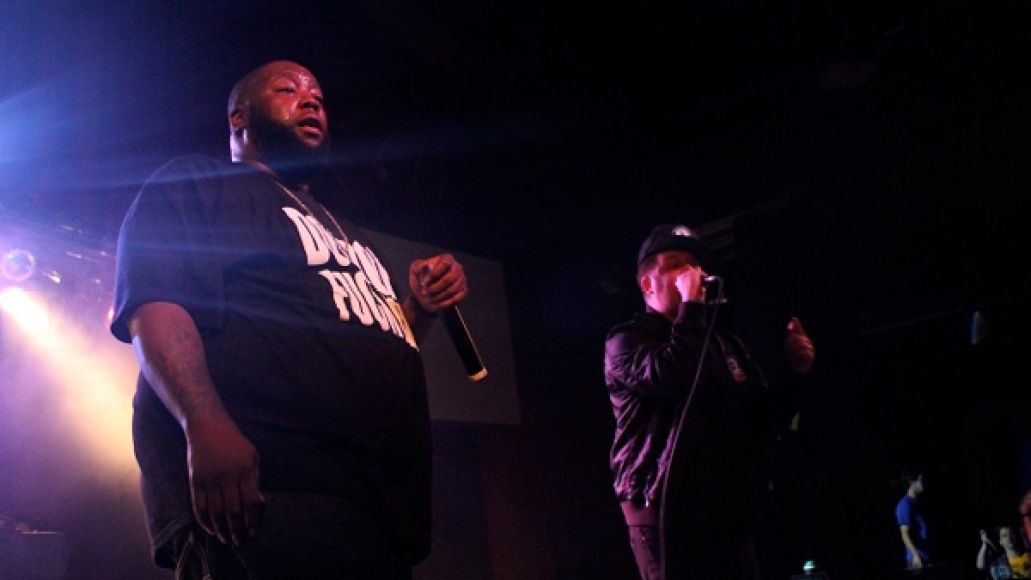 Two things were for certain upon walking into the Orange Peel Friday night: the venue was not big enough for the talent of Moogfest weekend and Killer Mike hates Ronald Reagan. Whether offering up his political philosophy with “Reagan” or threatening to “Burn” the entire venue down, Killer Mike maintains a level of energy that is inspiring for a man of his size. As expected, the affable frontman invited R.A.P. Music collaborator El-P on stage. Unexpectedly the duo broke into “Butane”, which received a boisterous “yeah, yeah, yeah” from the audience at the drop of the beat. 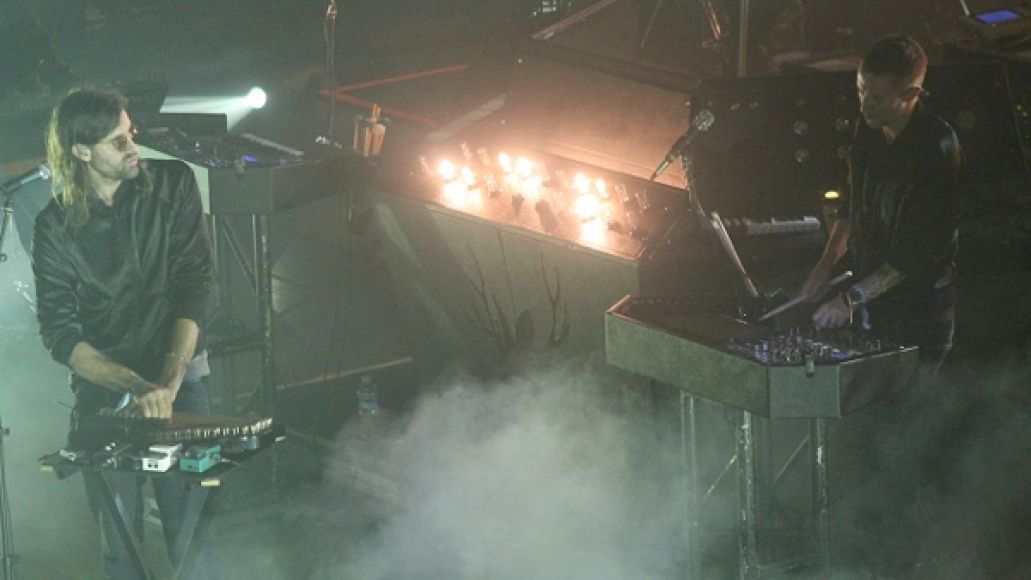 This set exemplified the power of the analog synthesizer. Behind the continuous haze of smoke and strobe lights, sat the massive control panels utilized by  Miike Snow’s production duo of Christian Karlsson and Pontus Winnberg. Accompanied by an additional two live musicians, frontman Andrew Wyatt could attack yet another synthesizer, a custom built table, or more regularly pace the stage like a caged jackalope. Designed as a classical music auditorium, the acoustics kept Wyatt’s vocals hovering just over the frantic instrumentation of tracks like “Burial”, “Silvia”, “Black and Blue”, “Paddling Out”, and “Devil’s Work”. In utter showmanship, the outfit left the audience waiting until the end to hear breakout hit “Animal”, which was best left to the packed crowd for singing. 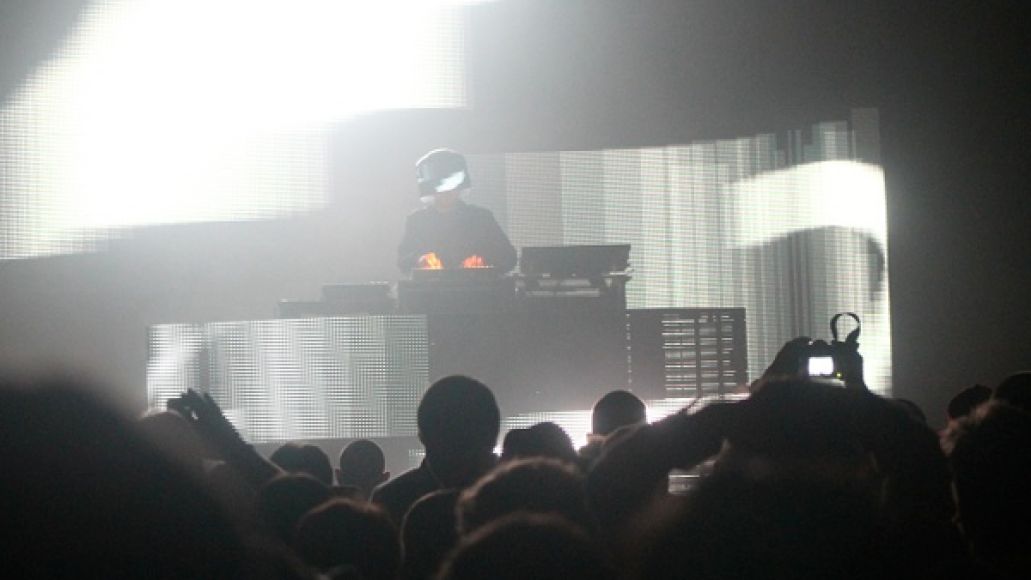 Aside from witnessing Kraftwerk at this year’s Ultra, never have I heard so many dedicated fans talking about how long they have waited to watch a particular artist. And I am not referring to a few years, but over a decade for many of the fans that lined the security gate in hopes of getting the full-force of Squarepusher’s multi-sensory live assault. One could expect a touch of disorienting acid to pulse through the set, what magnified the energy of the audience was just how dance-y the entirety of the set proved to be.

The bass dissonance alone could shock the brain with a natural serotonin; when combined with the massive synchronized wall of LEDs, the performance became a towering light for the swarm of acid-techno loving gnats. Squarepusher’s hands nearly hit as rapidly, and violently, as the lights. When not busy tapping through multiple controllers, he was orchestrating tempo shifts to the audience. No matter the expectations, fans left fulfilled after the 75-minute exploration of IDM. 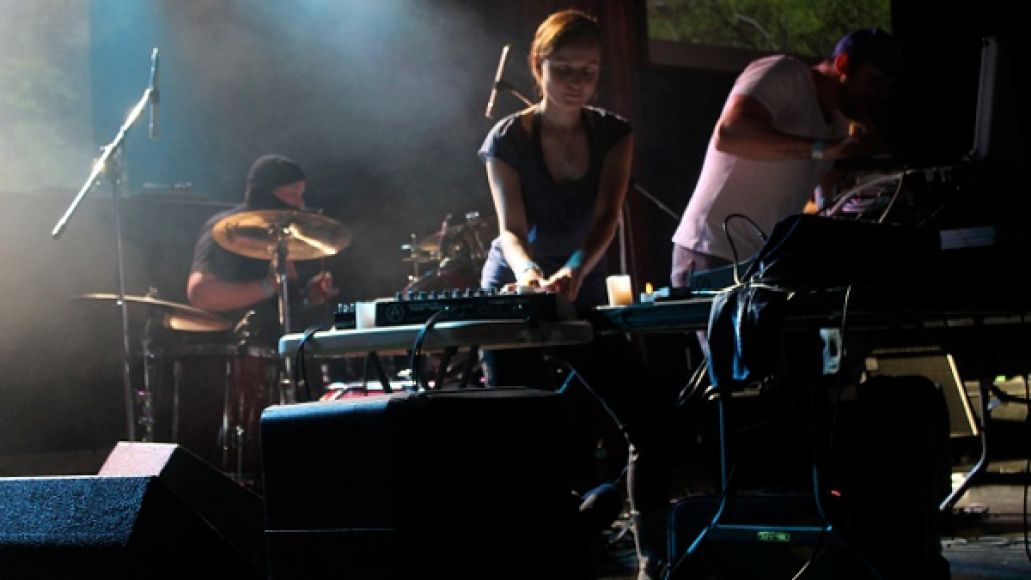 Amid a backdrop of a decaying playground, Black Moth Super Rainbow blended the psychedelia of nostalgic analog electronic instruments with the power of guitar-led rock music. Outfit leader Tobacco added yet another element of psych depth with other-wordly vocoder vocals. The set was a demonstration on the longevity of synthesizers. At the fingertips of the right group of individuals, the sounds of dated analog technology are timeless when attacked with a densely layered groove. The five-piece fit right into the experimental focus of Asheville, which is possibly why the line to experience their show stretched for a city block. 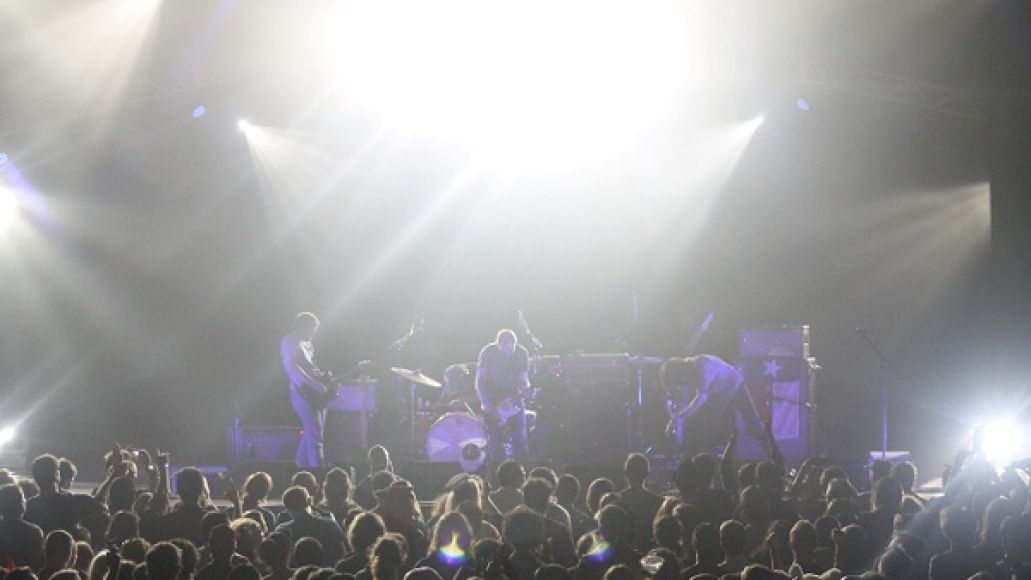 “This band ain’t got nothin’ but gee-tars,” I overheard in the stereotypical Southern draw. The statement was fairly accurate, but quite shortsighted in respect to both Explosions in the Sky and Bob Moog himself. Moog helped revolutionize sound, and while Explosions doesn’t utilize table-top synthesizers, they push the sound of their equipment to the furthest reaches with the help of various effects pedals. At times during their set, if was difficult to even see Munaf Rayani, Mark Smith, and Michael James in action as they were constantly reaching downward to adjust the sonic output of their equipment. After a day highlighted by the anger of Killer Mike and the bombastic energy of Squarepusher, the post-rock ambiance of Explosions in the Sky was a much needed mental vacation. As the four-piece worked through their instrumental epics, I slowly melted into my seat, and simply allowed the  waves of interwoven strings wash the stresses of “real-life” away into the darkness of the brisk Asheville evening.