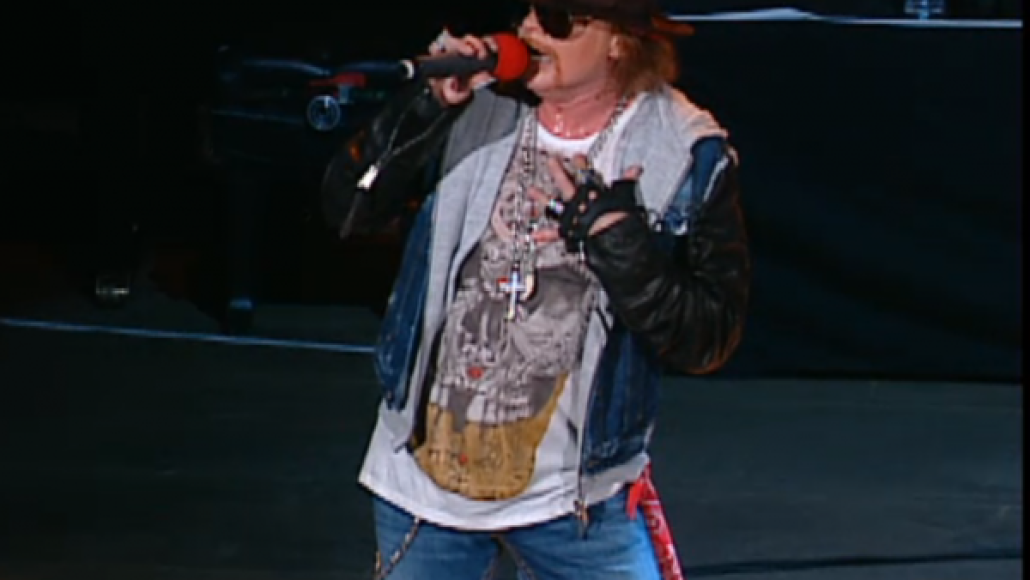 Guns N’ Roses — or Axl Rose, for that matter — did the impossible and actually appeared on-time for their set at Neil Young’s Bridge School Benefit this past weekend. The band brought their foul-mouthed swagger (spitting a few “fucks” in front of kids, no less) and stripped down their traditional 53 electric guitar medley for an acoustic-laden set that culled material off the band’s landmark 1987 debut Appetite for Destruction, 1988’s live GN’R Lies EP, and their latest album, ahem, 2008’s Chinese Democracy.

While Rose has long performed acoustic renditions of “You’re Crazy”, “Used to Love Her”, or “Patience”, heavier flair like “Better”, “Welcome to the Jungle”, and “Sweet Child O’ Mine” don’t traditionally receive the ol’ college dorm room try. Not surprisingly, those three cuts sounded beyond awful — especially “Better” — yet smilar to those creepy statues on Easter Island, it’s just something you need to see for yourself.

The evening also included a brief appearance by surprise opening act Eddie Vedder, who was reportedly tapped in case the band stuck to their usual set time of being two hours late. As he put it, “Good evening. I woke up this morning, this is the last thing I thought I’d be doing: opening up for Guns N’ Roses with an acoustic guitar.” The longtime friend and fan of Young rolled out acoustic cuts of Wayne Cochran’s “Last Kiss” and Pearl Jam’s “Elderly Woman Behind the Counter in a Small Town”.

Replay the set’s official streams below (via Hidden Track).

“Welcome to the Jungle”: