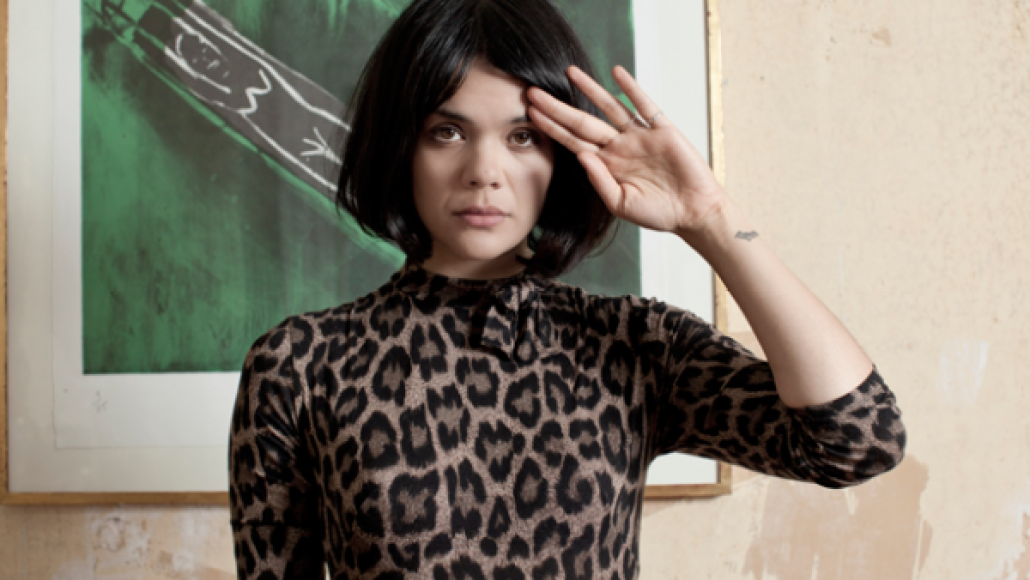 It’s easy to be taken somewhere far, far away when listening to Bat For Lashes, thanks to a combination of mystic sounds and powerfully commanding, otherworldly vocals. When writing 2009’s Two Suns, Natasha Khan lived in New York and ventured to California’s Joshua Tree, battling a femme fatale alter ego named Pearl along the way. Three and a half years later, Khan returns from the fight with her third album, The Haunted Man. Consequence of Sound recently sat down with the singer-songwriter for a quick chat to dig into the new album and discuss Khan’s personal voyage at home, where she tapped into her roots whilst writing and recording the album.

Who is the haunted man and what’s haunting him?

Well, “The Haunted Man” is one of the first songs I wrote for the record, a nd when I wrote that, I felt lost. And when I finally had it, I thought it was dealing with the themes that are going to be happening on this record. It sort of defined the landscape of the record for me. I didn’t know that initially, but the fact that it ended up being called that makes sense to me, because I think the haunted man is kind of my ancestry, and the album is all about things that haunt you from the past, or generational patterns that have trickled down and formed the way you might have relationships with people, or patterns that you unconsciously follow.

For me, it’s always about ghosts from the past that I’m trying to release. The haunted man, he represents all the songs. He’s kind of present in all the songs. He might be a soldier that hasn’t come home from war, or a lover I am looking for, or a traumatized man that needs healing. There’s a bunch of different facets to him.

It’s interesting that you mentioned a soldier, because the feeling that I got from the album cover is that you’re appearing as an angelic figure carrying a wounded soldier.

That’s interesting. People have different interpretations of it. I think it can represent lots of different male/female relationship roles. It could be taken in different ways, but I’m glad that’s what you thought, because it’s very much about the burden of carrying someone that is wounded. Like you say, that kind of strength that women sometimes have to rescue and nurture and pull through things…it’s a mixture of needing to let that go, and release that burden, and also moving forward into a much more hopeful, safe place. Maybe the cover is that transitionary place between the two things.

It sounds like The Haunted Man is a healing record?

Yeah, I guess so. I wrote [the title track], but I also wrote “Lilies” at a similar time. And when I wrote both of those, I really felt like those were the light and dark aspects of the record, “The Haunted Man” being the past and “Lilies” being the future. Like, the healing and the blossoming is very pro-life, being really thrilled to be alive, and releasing the burdens, and having a new phase. And definitely, I think there’s a lot of healing and nurturing things on the record, songs like “A Wall”, “Rest Your Head”, or “Deep Sea Divers”. There’s a lot of [those] aspects in those songs, for sure.

Tell me about the role of your ancestry research on The Haunted Man.

The reason I felt that was important was because when I finished Two Suns, I’d been living in America for a while and traveling a lot, obviously, and I felt it was an important, conscious decision to stay in England. And I lived for most of the making of the record in Brighton by the sea, in my flat there. I had my home studio there and I wrote all of the songs there, and while doing that I felt really happy to be home, and I really wanted to stay in one place for a while.

England being my home, where I grew up, I started to really think about the history of England and my family. The fact that my granddad had been through a war, and how did that affect my grandparents’ relationship, and how did that affect my parents’ relationship, and looking at the family tree. And also, at the time there was a lot going on in England. I felt that there was a real resurgence of thinking about the past, the wars, soldiers, and even PJ Harvey’s [Let England Shake] was about war.

It just seemed like there was this undercurrent of thinking about our roots in terms of a more cathartic way, and it just was in the air. And also just being in Brighton, you’re surrounded by the Sussex countryside, which is very hilly, and full of country lanes, and quite rugged coastal lines. I felt like that feels like home to me, the ghosts I was trying to exorcise throughout the record.

That’s quite different from living in New York and journeying to Joshua Tree for Two Suns.

I mean, I was still traveling just as much, but it was more in my mind and through the lineage. A more bloodlines journey, as opposed to physical, landscape, cosmic, universal things. We kind of went from the macrocosm to the microcosm in a way, traveling through my DNA as opposed to across oceans. Obviously, the fallout of that is that it was more intimate and a lot more direct.

Definitely. And when you’re talking about cosmic things and traveling across countries, everything in that’s a big, expansive wash of large concepts to take in, whereas this is just me at home traveling psychologically through the history of my family and behavioral and relationship patterns. Going deep into myself more, I suppose.