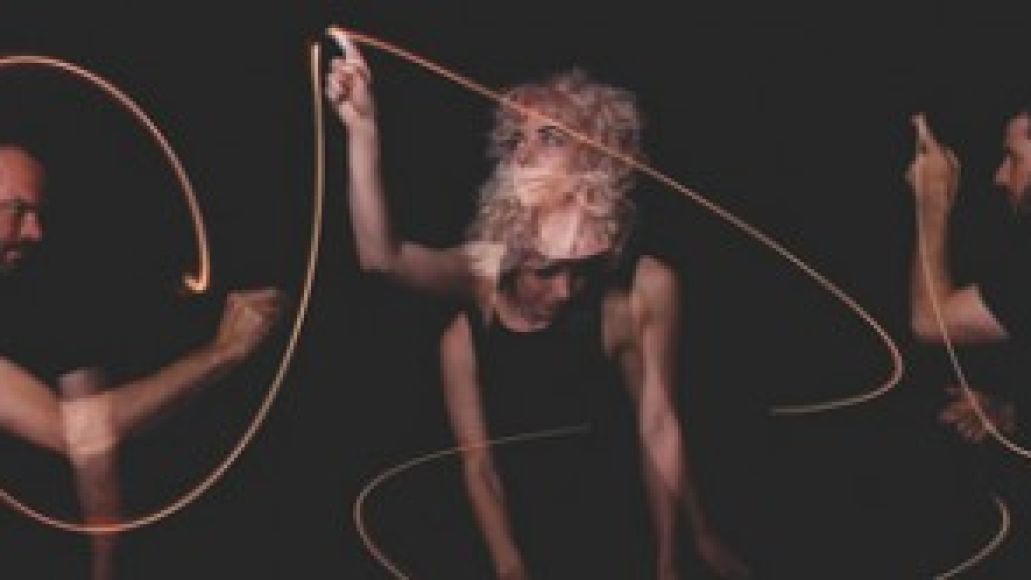 “I mean, I could be working at a fucking dry cleaners, you know what I mean?”

UltraÃ­sta aren’t too concerned with the genre makeup of their songs, or fitting into a niche, or defining themselves at all, really. Their name comes from a term used to describe artists who were part of the Ultraist literary movement in Spain in the early 20th century, though it’s not really the aesthetics of the ultraist movement the band reflects. UltraÃ­sta conjures an image, a bright picture of “color and vibration”, and it also reflects a group of artists who feel connected to any aesthetic, really. For UltraÃ­sta, their common ground is simple: They believe in music as a visual creation, and have a voracious desire to create.

Nigel Godrich, who counts Paul McCartney, Beck, Pavement, Air, and, most famously, Radiohead among many of the artists he’s produced over the years, had always wanted to expand the studio experiments he did over the years with Atoms for Peace drummer and longtime friend Joey Waronker. The two enlisted Laura Bettinson, a recent graduate from the art school at Goldsmiths College, who until she met Godrich and Waronker at her show, was creating her own music under the moniker Dimbleby & Capper. The three synched up and created something singular and honest from three people just being on the same page. It was providence, really, that the three ended up making something like this.

Godrich and Bettinson talked with us from Godrich’s studio in London — the break room, to be specific, a massive area that I thought must have been the control room or the studio itself from what I could make out from our video-chat conversation —  about the genesis of the UltraÃ­sta, what it’s like to work with three producers on a project, how synesthesia can quantify the seemingly unquantifiable, and how getting drunk with strobe lights can inspire a whole visual swatch book to accompany each song. 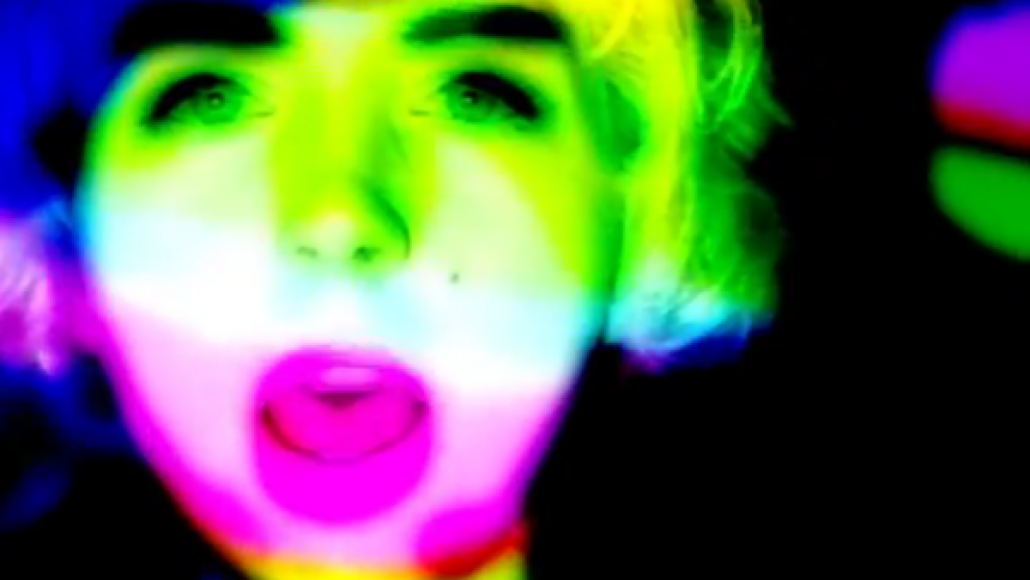 Since starting In The Basement, has that changed how you work with bands in the studio?

Nigel Godrich: No it actually hasn’t changed it at all, really. What it’s done is it’s introduced me to some new friends and that has been great, and I’ve been exposed to some new bands. But actually the whole idea for In The Basement was the other way around: I feel like when working in the studio I find it very easy to get a good sound very quickly, and I always sort of lament that not happening on TV, like it’s sort of upsetting to me when I watch bad music television. If anything, it has reaffirmed my suspicion that bands just sound better in the studio – it sounds very good very quickly. And you can spend a lot of time working on something as it gradually sounds worse and worse. And it captures something very visceral very quick – and on television as well.

How did you three end up meeting to collaborate on this project?

Laura Bettinson: We met about three years ago, the guys basically got in touch with me through a mutual friend. I came and met Nigel, we hung out for a bit, and then I went to meet Joey [Waronker]  in L.A.

Godrich: [Laughs.] She’s trying to make it sound like it was that simple, like nothing happened. [Joey and I] have known each other for a long time, because we met with Beck, because Joey played with Beck. And when I first went to LA and worked as a young whippersnapper, I ended up making Mutations which was this uber crazy experience — like a two week album. It was like walking into this golden land where every single piece of equipment in this incredible studio was the best thing– and this was the best drummer I’ve ever recorded– which was Joey – it was this incredible standard of everything.

So Joey and I have had a long relationship, and we became very good friends over the years and had sort of always made music and fucked around in the studio, and so we decided that we could actually focus for a minute and do something interesting.We listened to a lot of Afrobeat and listened to a lot of groove-based electronic stuff, and thought about our favorite bands, and how it was always this focused, groove-based stuff. You know, the best of Talking Heads, and White Rabbit sort of high-class pop music but done in a very artistic way. So, we made some tracks that just sat around for a while until it occurred to us that we should probably explore some sort of extension as to where it could go. 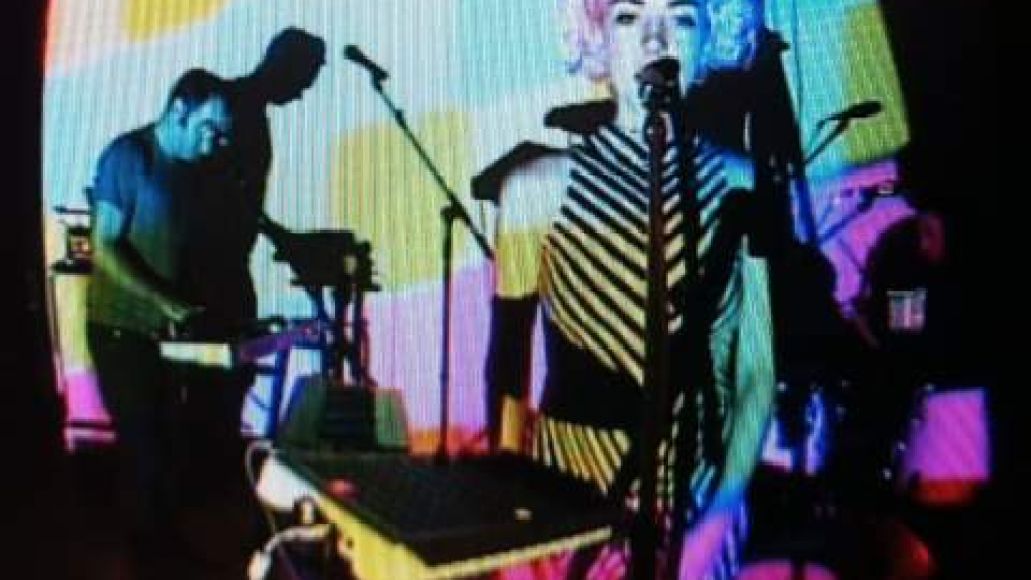 In my head, I was trying to find someone who was creative and artistic who was not necessarily a musician because the idea of getting someone from a another art form was very interesting. It’s very, very hard to find a musician who has not already decided that they’re not going to be the next singer-songwriter. Something that I’m not into anyway

We flyered around art colleges in London and went to some shows and it was good entertainment but absolutely fucking useless as far as we were concerned. She was performing on her own, but she had a loop station, just working with very simple beats and just layering her voice, and it was a very obvious thing that this would work with what we had done. And we talked to her and she was like “…Ok?” [Laughs.] But then we got on really well, and that was great. But at the end of the day it’s about people’s attitudes. We meet aesthetically, I think we all do.

How often does it come down to the fact that you could just share a beer with someone?

Godrich: The point is, you’re not going to spend a day in a contained space with an asshole. You’re not. And obviously there’s a lot more to it than that. Singularly, I think if people really share a sort of intention and vision, they will get on because you’re not fighting. We’re not at odds. We’ve got a reason to be here and essentially it’s just the entertainment and the fun of being able to do this – it’s a luxury, really. I mean I could be working at a fucking dry cleaners, you know what I mean?

Bettinson: Basically for this project, we did a lot of the lyrics collaboratively. The lyrics essentially came from the melodies I was singing in the first place. I would mumble some stuff in, and then a couple of words that stuck out as a starting point, and then build and refine things from there. It was a different process – I’ve never written lyrics collaboratively and what was really good for me actually, for this project, because it was a different new challenge, and it made for better lyrics in the end.

Godrich: It was a bit of a book club.

Bettinson: We kind of wanted to keep them abstract and cut up, which was stuff that I had done at college anyway. Like, you’d pick up a book and just find something, and just find some inspiration to start from. And I think we all quite like doing it that way.

Godrich: I mean I think it’s true to say that what the great skill and the thing that is fun about what you do when you’re making anything is you’re trying to outdo your physical entity, trying to make something that is beyond your conception, really. And that you have to find a method and a way of creating stuff, and then you get a bit of distance, and you have an opinion about what you’ve done, and then you look at it, and you edit it.

So we’ve got three editors, and three people who can create stuff – it’s like a little kind of basket weaving workshop. But there’s a point that happens where there is a moment of focus where things suddenly, mysteriously evolve a relevance or evolve some sort of meaning, and those are the thing you naturally tend towards, and you’ll naturally go to them. So at the end of the day you have something that does have a resonance for her and does have a resonance for me and then you ask us, “How do you make your lyrics,” and the answer is: “I don’t know”

Godrich: That works for music too—this is what’s been sort of interesting to me. These sort of rules of creation, those kind of ways of making things. Different things that I’d usually be doing. I’m not a lyric writer, naturally.