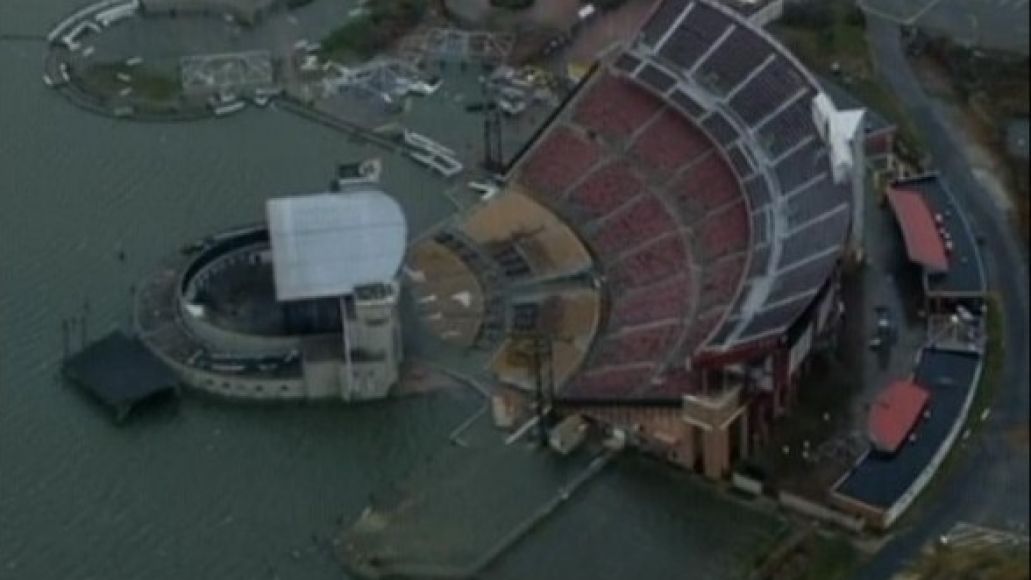 Up above is a photo of a submerged Jones Beach Theater in Wantagh New York, one of the many victims of Hurricane Sandy. Just this past summer the venue hosted concerts by Phish, System of a Down, Deftones, The Beach Boys, Drake, Dave Matthews Band, and Florence and the Machine. However, despite its current condition, the venue plans to be operational by next summer.

The famed Stoney Pony in Asbury Park, NJ fared much better, despite massive flooding and destruction in the area. “We did quite well,” general manager Caroline O’Toole told the Asbury Park Press. “We did a lot of prep work and luck was on our side. Except for some damage to our side fence, we’re OK. It’s dry inside and all the history is preserved.”

We checked in with other venues along the East coast, and all of them experienced little to no damage. However, a number of Tuesday night concerts have been postponed.

— Public Assembly in Brooklyn will be closed Tuesday due to the MTA shut-down. As of early afternoon, the venue had yet to survey damages but didn’t anticipate any major problems.

— Shea Stadium in Brooklyn does not have another show schedule until Friday night. A loading gate fell down next door but the block “seems pretty stable.”

— Glasslands in Brooklyn did not sustain any damage, despite being just 40 feet from the East Rick. The venue plans to reopen tonight.

— 9:30 Club sustained no damage, however, tonight’s Grouplove show has been postponed. New dates will be announced shortly and all tickets from the postponed shows will be honored. Tomorrow’s Freelance Whales show is expected to go on as planned.

— The Black Cat remained open throughout the storm and did not sustain any damage. Their Monday night show with Bear in Heaven and Eraas was canceled due to the fact that the bands were traveling from NYC, but the club itself opened. Tonight’s show with Heartless Bastards is on and the venue does note expect tomorrow’s show to be canceled.

— House of Blues expects tonight’s Social Distortion show to go on as scheduled.

— All Tuesday night shows will take place at The Royale, Bowery Boston, Great Scott and TT the Bears.