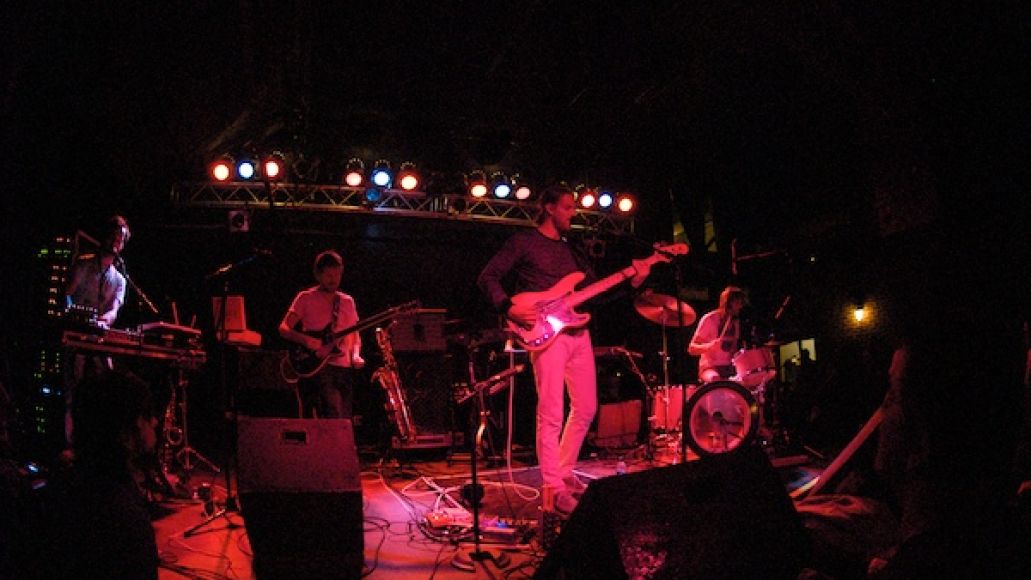 Doors opened a good 40 minutes late at Brighton Music Hall on Saturday night, causing one of the first lines I’ve seen on Brighton Ave in some time. Still, there were tickets available inside, and the show wasn’t nearly sold out. Which leads to this question: Why isn’t Menomena a bigger band? If they’ve been delivering sets half as strong as what they brought to Boston this weekend, coupled with their string of critically acclaimed albums, they certainly ought to be.

Further digression on that in a bit, but first we have to briefly discuss PVT (that’s “pivot”). I didn’t catch the name of the opening cut, but it seemed an ill choice. Singer Richard Pike’s vocals came out a bit shrilly, and the song lacked any of the drive needed to rope a still-filling crowd into the show. A new number (“Evolution”?) came next and had much more appeal in its pounding rhythms and swirling synth strains.

You can understand a band three albums in not wanting to open with a new number, but it might actually have been a better play for this crowd. It was apparent no one was really familiar with the Sydney band, evidenced enough by the shallow attendance for the openers. “We like your accents!” a girl screamed out at one point. “‘We like your accents’,” Pike echoed. “‘We like your hair.’ But what about the music?” If people were really feeling the band’s blend of Liars and electronic-industrial styles, that comment should’ve brought cheers, not chuckles. While drummer Laurence Pike was impressive with his syncopated rhythms, singer Pike forgot a few lyrics and multi-instrumentalist Dave Miller looked uncomfortably threatening banging a tambourine. A few closed-eyed crowd members swayed along throughout the set, but I don’t think PVT left with too many new fans.

By the time Menomena hit the stage, BMH was nicely filled — not sardine-filled, as it can be, but the crowd was sizable. Prior to their set, a Wisconsin transplant next to me remarked that he was disappointed in the fairly static crowds at the few shows he’d seen in his first two weeks as a Bostonian. Danny Seim shattered that image with the first drum crash of “Muscle’n Flo”, rocking bodies deep into the crowd. And the audience responded similarly to the breadth of the band’s material, from the persistent hand clapping during “Plumage” to that one (jerk) calling constantly for “Strongest Man in the World” from Menomena’s debut — when it finally played, he wasn’t the only one cheering. 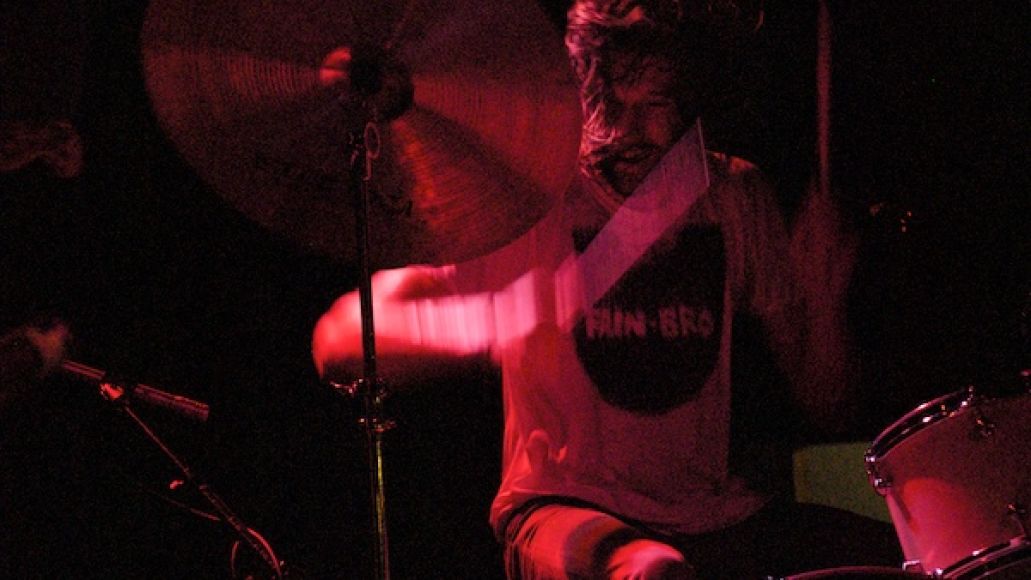 New or old, the material simply exploded on stage. I mean, you think “TAOS” is a rocker on record, you should feel the earthquake it is live. In the roaring salvo, one was left with a feeling that Menomena is indeed miscategorized as an “experimental” band; they’re an honest-to-gosh indie rock band, filled with all the lyrical wit, musical risk-taking, and instrumental orgies that implies. Numbers like “Pique” and “Don’t Mess With Latexas” off of Moms play along with “Queen Black Acid” and “Rotten Hell” like there were never any lineup changes, never any bad blood amongst members. They do have their more experimental numbers, like “Strongest Man” or maybe “Five Little Rooms”, but these slip nicely into the setlist, adding padding but never fluff. Solid repertoire? Check.

Now, I can’t fairly comment on how they’re dealing post-Brent Knopf as I never saw them as a trio. Still, they’ve pieced together a seriously impressive touring outfit to bring their songs to the stage. Holcombe Waller can do whatever is asked of him, from piano to sleigh bells to sax. Matt Dabrowiak may not catch your eye consistently, but when he does, his guitar work is bright and brilliant. Multi-talented oddball Paul Alcott demands as much attention as either Seim or Justin Harris. Together, they win huge props for being able to take material recorded by two or three people, largely in their signature looping process, and give an impeccable performance in all its intricacy without backing tracks. Successful studio-to-stage translation? Check.

Audience interaction was a mixed bag, due mostly to the fact that both Seim and Harris tend to mumble on stage. Before closing with “TAOS”, Seim tried to say goodbye; when it became clear he wasn’t being understood, he blurted out a bunch of beeps and clicks, said “bye,” and went back to playing. At one point, Harris heard someone yell, “North by North West!”, and quickly regretted acknowledging the cry when the individual (the same jerk who called for “Strongest Man”) proceeded to have a one-sided conversation recalling every time he’d seen Menomena live. But he never mocked the heckler, never tried to shut him up. After the set, Harris barely took a sip of water before he was back at the merch table, talking to fans and selling his wares. Seim appeared genuinely pleased to meet fans, smiling and asking their names. Both members, by the way, sign their names like adorable 12-year-old girls; Harris with “XO” and Seim with a little heart. Appreciation and respect for their fans? Check.

They’ve got the catalog, they’ve got the skills and musicians to bring it to the stage, and they’ve got a solid relationship with their fan-base. Why, then, does it seem every time I mention Menomena to someone, they go “doot-dooo do-do-do” and shake their head when I tell them they’re a band? Why are they still playing the same, fairly small venue they did six years ago, and not selling it out? Based on this checklist, they certainly ought to be one of the bigger indie bands around.