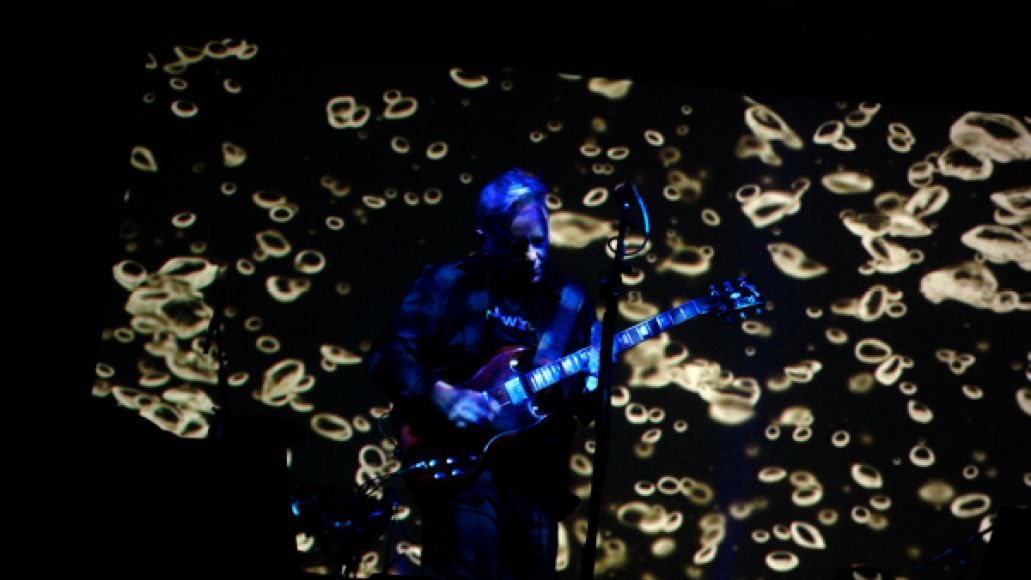 Less than 10 minutes before they closed their set at Chicago’s Aragon Ballroom, New Order dusted off Joy Division’s “Heart and Soul” for a tour first. One of maybe three cruisers off Joy Division’s funereal second and last LP, Closer, it’s a far cry from the star-crossed cocaine decadence of “True Faith”, “Bizarre Love Triangle”, or “Blue Monday”. Whereas those songs belong in nightclubs, arenas, or anywhere there’s people smiling, dancing, and ready to swap souls on a mattress, the former sounds stripped from James O’Barr’s The Crow — a Halloween revenge tale of a reanimated corpse seeking blood in the name of love. That partly explains why the sweaty masses, whom had all only minutes beforehand let their shoes fly to “Temptation”, stood around in an awkward stupor. Sigh, you gotta love Joy Division.

But New Order, too. It’s been a busy year: They’ve left Peter Hook to the history books, where he continues to wax nostalgic with his band The Light, and instead championed forward by taking in a returning veteran (keyboardist Gillian Gilbert) and accepting a transfusion of new blood (bassist Tom Chapman). It’s an amicable transition for a band that’s currently amidst its (count it) second reunion. What’s great is that never does this “third coming” simply feel like a trip down memory lane. Having caught their short hour-long performance at this year’s Ultra Music Festival in Miami, I can attest that their set has evolved into a bonafide stage show that’s ravenous and creative enough to scream, “It ain’t over ’til it’s over.” 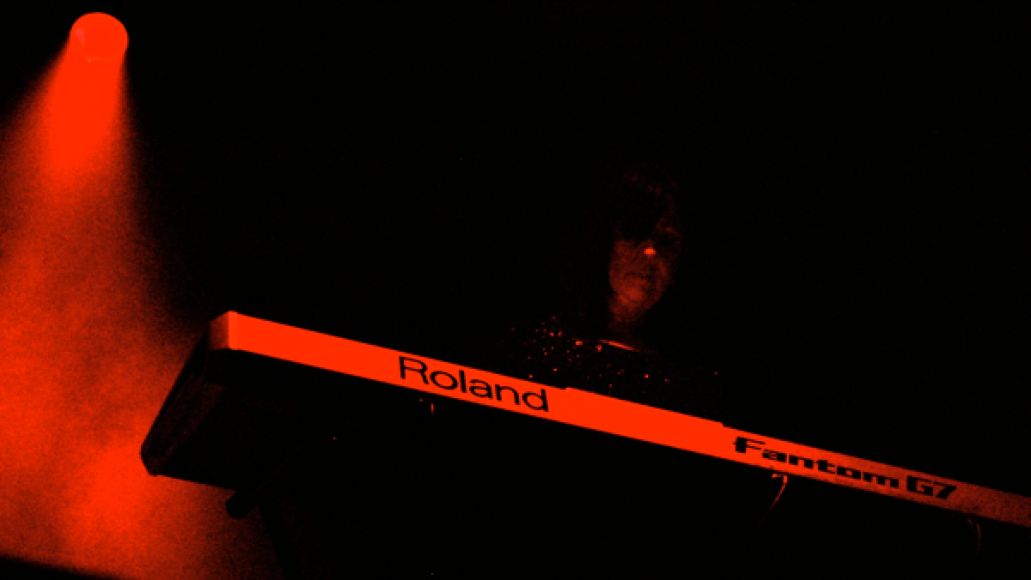 Probably because everyone’s still barking up the right tree. Frontman Bernard Sumner’s delicate coos and temperate vocals sound stripped from the vinyls, Stephen Morris still rivals any drum machine, and Gilbert could offer a lesson to anyone who’s intrigued in the black and white. Guitarist Phil Cunningham, who’s performed alongside Sumner and Morris since 2001, maintains that middle ground between optimal and minimal, while Chapman hits the bass harder and spits with an edge (No lie: During “Blue Monday”, Sumner put his mic up to Chapman’s bass as he slammed out the iconic riff, and somewhere overseas Hook woke up seething in anger and sweat.).

Couple that familial vibe with the show’s curated arsenal of Koyaanisqatsi-esque visuals that accompanied each track — from the wonders of Mother Nature in The Earth Wins during “Your Silent Face” to Amos Poe’s shots of NYC in Empire II during “The Perfect Kiss” — and everything felt organic, mortal, and youthful. This wasn’t a greatest hits gig a la The Police’s by-the-numbers reunion; instead, New Order catered to the audience and themselves. There were surprises (“Close Range” off 2001’s Get Ready), pleasantries (“Here to Stay” off the 24 Hour Party People soundtrack), and facelifts (Sumner and Gilbert took many liberties with “Blue Monday”, when together they rolled out sheets of rusty synth lines that skittered across the stage by track’s end). 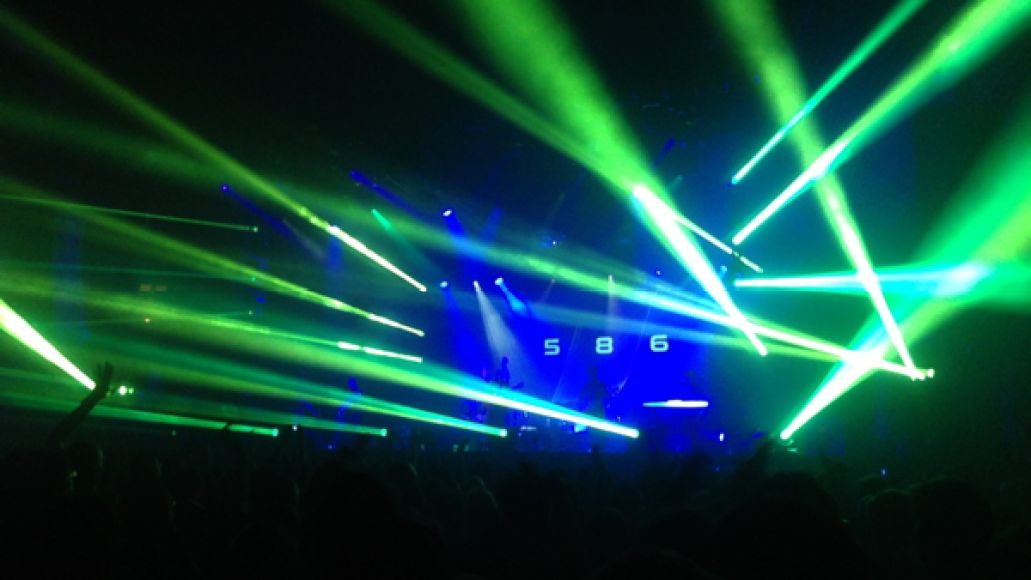 That’s not to say the hits took backseat. “Regret” lit the night’s first match, “Age of Consent” glowed as a fiery sing a long, “Bizarre Love Triangle” pushed the panic switch, and ”True Faith” just engulfed everything and everyone as the night’s dynamite dance party. Forty-five seconds had passed by the time people stopped applauding for the Substance single. No, the hits were aplenty and there wasn’t a soul in the room that could scoff at them. Well, that’s not true, there were probably a couple, but they either a.) wore shit shoes or b.) died in the inside years ago.

Speaking of which, there’s always a lingering, depressing underbelly to New Order: Ian Curtis’ tragic suicide and Joy Division’s early demise. Their key insight to not ignore their past — as they did last night with an encore of three of the late band’s tracks (“Heart and Soul”, “Atmosphere”, and “Love Will Tear Us Apart”) — offered up a couple of goodie bag favors for the noggin. It preserved the sanctity of Curtis, who will always (rightly) be immortalized as a post-punk hero, and also stressed how far and beyond New Order has gone. 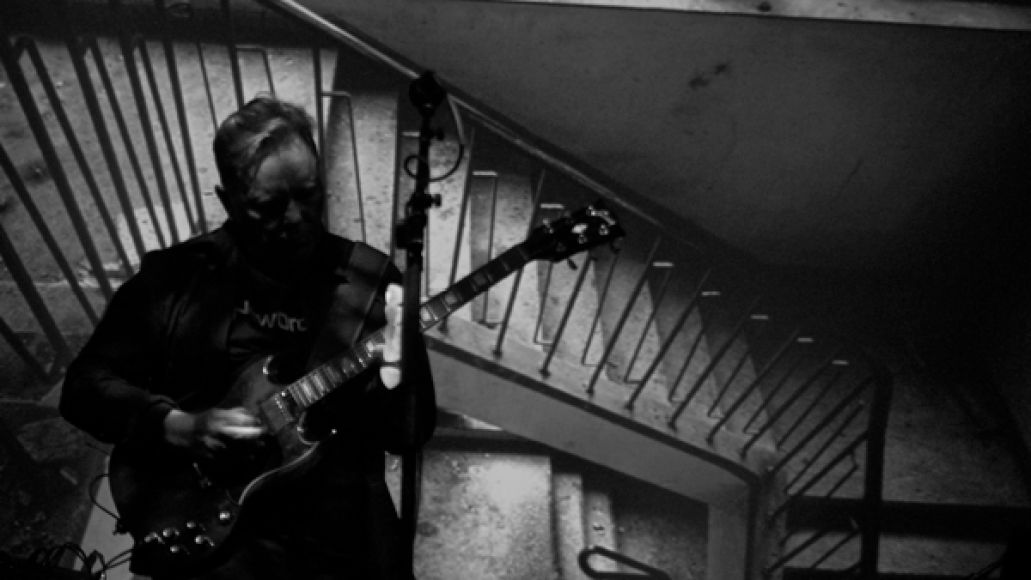 Now, “Ceremony” is officially labeled a New Order song, but really, it’s a Joy Division track, which Sumner admitted to before performing it last night. Critics, fans, and even the band all contend that the track’s an indication of where Joy Division was going to head. (Personally, I’ll always consider their 1981 debut album Movement as the unofficial third Joy Division album, but that’s just me.) Hearing it 30 something years later, it admittedly serves better as the starting line to a relay of hurdles and obstacles Hook, Sumner, and Morris overcame. Pair the song up to something as obvious as “Bizarre Love Triangle” and try and connect the dots; it’s baffling. Ha, that line in Raiders of the Lost Ark comes to mind — ”It’s not the years, honey, it’s the mileage.” — and let’s just say they’re flying for free these days.

What’s not influential about that?