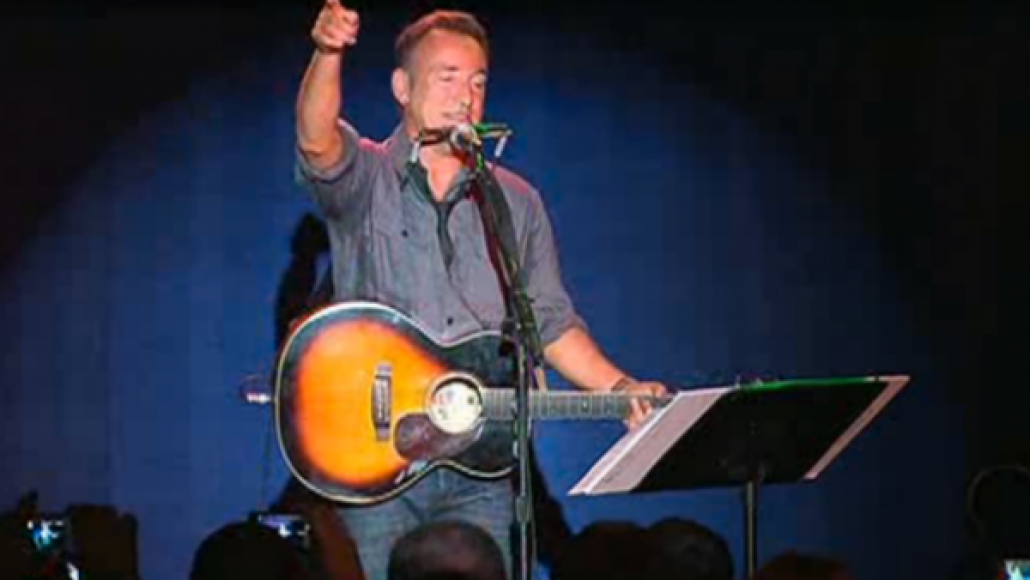 Bruce Springsteen appeared alongside former President Bill Clinton at a campaign rally for President Barack Obama in Parma, OH early Thursday afternoon. For his part, Springsteen performed a seven-song all-acoustic set which included versions of “No Surrender”, “Youngstown”, and “Thunder Road”. He also debuted a new Obama “rally song,” which he said was written at the request of the President. Unfortuantely, “Obama” isn’t the easiest name to rhyme, limiting Springsteen’s song to just three verses. You can watch video footage of the entire performance below.

That’s not the last of his political hi jinx however. Springsteen will also perform at a campaign rally in Ames, IA later today. (Maybe they’ll let Bill play sax?)

The appearances come just a day after the musician published a lengthy note in which he explained his reasons for supporting President Obama in the upcoming election.

Right now, there is a choice going on in America, and I’m happy that we live in a country where we all participate in that process. For me, President Obama is our best choice because he has a vision of the United States as a place where we are all in this together. We’re still living through very hard times but justice, equality and real freedom are not always a tide rushing in. They are more often a slow march, inch by inch, day after long day. I believe President Obama feels these days in his bones and has the strength to live them with us and to lead us to a country “…where no one crowds you and no one goes it alone.”

You can read the full letter here.

Setlist:
No Surrender
The Promised Land
Obama Rally Song
Youngstown
We Take Care Of Our Own
This Land Is Your Land
THIS LAND IS YOUR LAND
Thunder Road