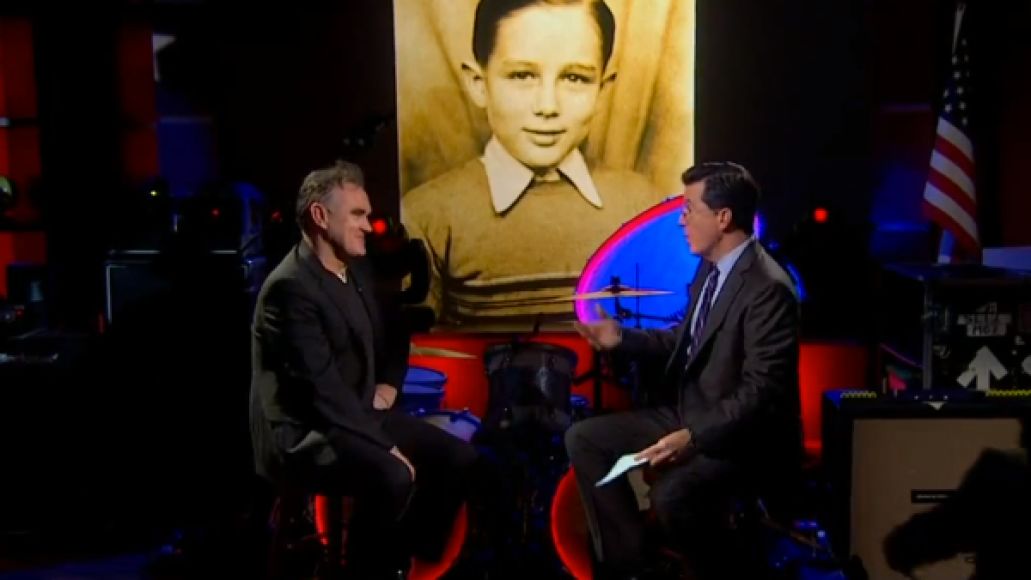 On the eve of his landmark concert at NYC’s famed Radio City Music Hall, Morrissey returned to late night television for an evening with The Colbert Report. “Are you ready to rock…yourself back and forth in the shower while crying,” Stephen Colbert asked his audience prior to the interview. As expected, the moody songwriter and staunch vegetarian, who actually demanded the studio be meat-free for his visit, brought the awkwardness. Right off the bat, he quickly challenged Colbert by redefining the term “legendary,” and then proceeded to scoff at questions surrounding the royal family, insisting that “the world does not need them.”

When he asked if the States have a royal family, Colbert fired back in trademark fashion: “Well, yes, they’re called The Romneys.” From here on out, the host remained on top, even giving Moz a good ol’ scare by teasing an appearance from Johnny Marr. Shortly after, a quick discussion on the “unintended consequences of Meat is Murder brought smiles from both — enough that the singer still decided to stick around and perform “People Are the Same Everywhere”.  Replay it all now, courtesy of The Audio Perv.

“People Are the Same Everywhere”:

Following tonight’s concert a Radio City, Morrissey will continue his tour across the U.S. with appearances at just about everywhere. Pencil in your future tears below.

The Killers Perform "In Another Life" on Corden: Watch

Lorde Brings the Beach to Corden for "California" Performance: Watch

Video: Morrissey on The Colbert Report