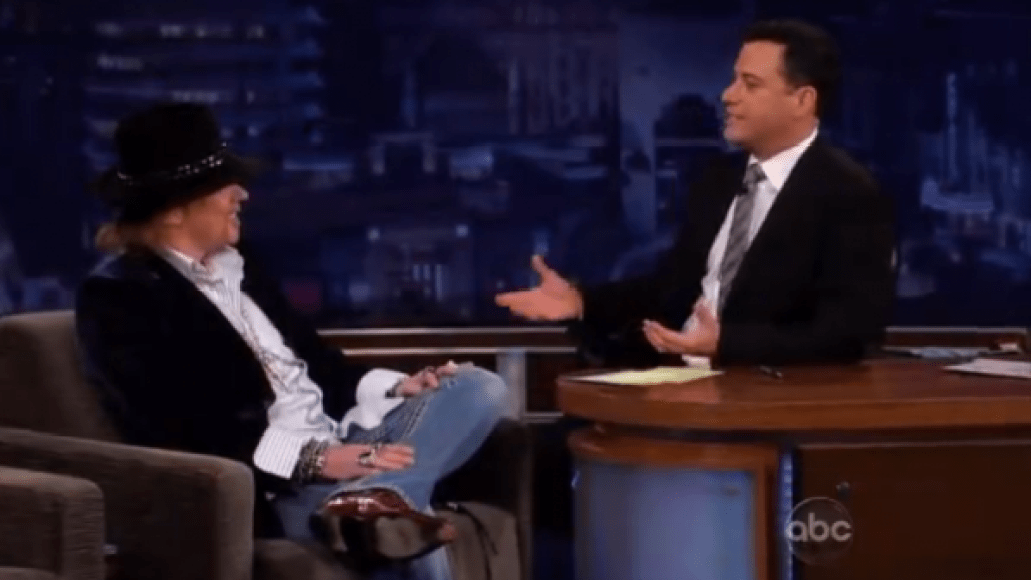 The mighty Axl Rose sat down for his first television interview in two decades Wednesday night on Jimmy Kimmel Live!. Out to promote Guns N’ Roses forthcoming Las Vegas residency, Axl initially appeared uncomfortable by the unfamiliar setting, responding to questions about his past with one or two word answers. As expected, the conversation became especially tense when the topics involved the band’s original lineup.

“We’re just a few minutes from your old rehearsal space, do you ever think about it when driving by?” “Not in a while.” “Do you remember it at all?” “Unfortunately.” He did, however, loosen up when the topic shifted to his annual Halloween party and more specifically his Halloween tree, which is exactly what you think it is.

Surprisingly, Axl really found his stride as he answered Twitter-submitted questions, poking fun at his cornrows and even his trademark punctuality. In fact, he even laughed along as Kimmel showed a picture of an Oscar Wilde quote hanging in his home which states, “Punctuality is the thief of time.” And doing his best Oprah impression, Axl ended his appearance by giving the audience tickets to the band’s upcoming residency and, of course, gift certificates to a hamburger joint.

Since it’ll probably be another 20 years before you see this sort of thing again, replay tonight’s interview below.