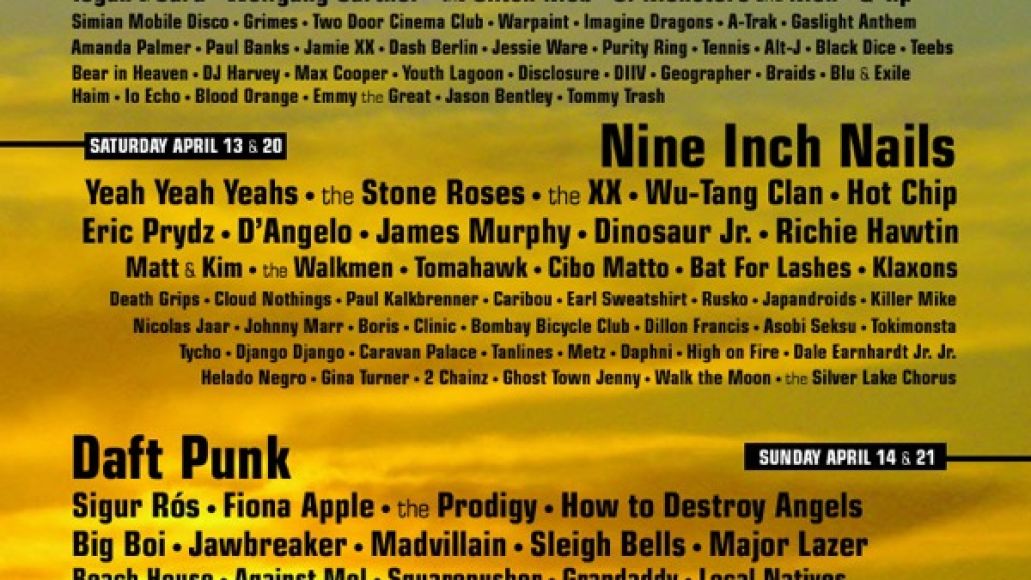 With just under 150 days until weekend one of Coachella 2013, the rumor mill is starting to heat up. So is the tried and true tradition of message board geeks loading up Photoshop, carefully selecting the right font, and then proceeding to make lineup posters that manage to fake out about 50 music websites, even though we’re telling them right now THIS THING IS FAKE.

With that said, whoever crafted this fake lineup did a really great job. For one, they paid close attention to our Festival Outlook and included rumored and logical acts like Atoms for Peace, Local Natives, Passion Pit, Sigur Rós, Tegan and Sara, and the Wu-Tang Clang alongside already confirmed EDM heavyweights Kill the Noise and Paul Kalkbrenner.

Reunions include the already reformed Blur, The Stone Roses, and Dead Can Dance, plus a left-field appearance by emo outfit Jawbreaker. And with Trent Reznor working with Queens of the Stone Age (and Dave Grohl!) on a track, stirrings of a Nine Inch Nails reunion, and two upcoming How to destroy angels_ releases, could you imagine six days of Reznor? Yeah, our brains just melted, too.

We’ll see in a couple of months.