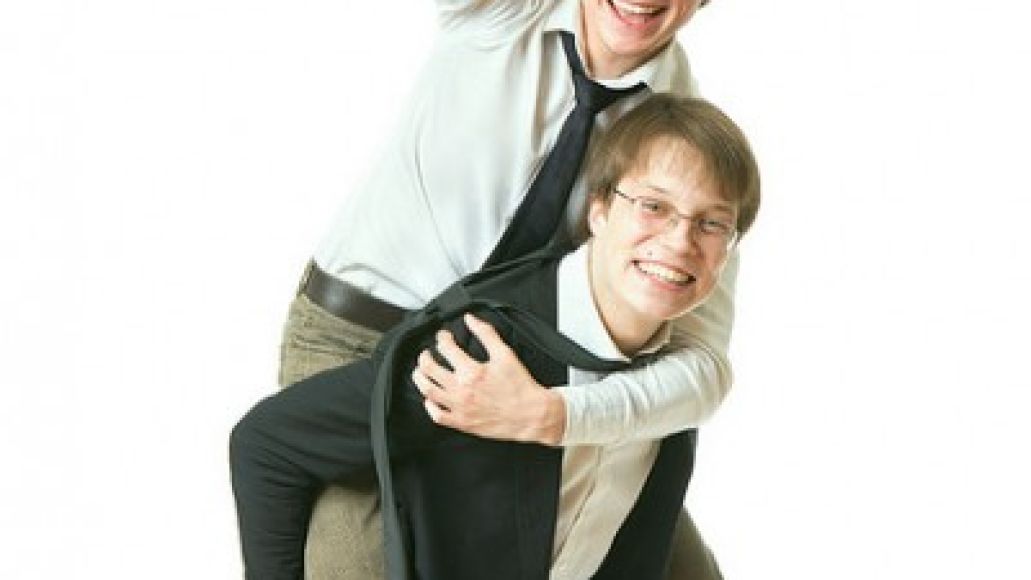 Our two hard-working interns, Josiah Wampfler and Sam Willet [not pictured], take some time away from the salt mines to talk about some of the music that ushers them Autumn. Check out both of their playlists combined into one Super CoS Intern Rdio Playlist below.

“Some on the list are tunes that would be great on a cold autumn day as you sit outside and watch the leaves fall. Others are tracks that you can blast in your car with the window down as you cruise through the colorful countryside. They all represent what my musical tastes have evolved into and what I hope to share with you. My hope is that these songs would entertain your eardrums as you get back into the swing of things this fall and bring you a variety of great tunes.”

Mumford & Sons – “Below My Feet”
This song is by far the best one off of Mumford & Sons new album, Babel. The free-going ease of Marcus Mumford’s voice at the outset drew me in immediately. As the song hits its climax, the passion in his voice, backed by the blaring instrumentation, gives me chills.

Green Day – “Give Me Novacaine/She’s a Rebel”
I started listening to this track again before ¡Uno! came out. While some of my love for this song is wrapped up in the pure nostalgia of it, there is something so kick-ass about the contrasting dynamics of the song. As it goes from the light acoustic guitar into the heavy, thrashing choruses on “Give Me Novacaine,” transitioning into the all-out sprint that is “She’s a Rebel”. It brings me back to the days when my friends and I played American Idiot on repeat all the time.

The Black Keys Feat. RZA – “The Baddest Man Alive”
This track just dropped a couple weeks ago, and as soon as I saw The Black Keys had released new material, I had to hear it. Then, when I heard RZA was featured, I grew ever more excited. The track is a great combination of the badassery that is The Black Keys style of blues rock and RZA’s laid back rap skills. The title says it all on this one. Blast this one while rolling down the street in your car.

Iron & Wine – “Sodom, South Georgia”
Sam Beam is one of the most talented artists I have heard. His style of folk shines through at its best on this track. Not only does it feature the soothing, soft voice of Beam backed by the simple strumming of his guitar, the lyrics are some of his best. Beam loops through metaphor after metaphor, singing things like “slept like a bucket of snow” or “fell like eyes on a crack in the door,” summoning beautiful pictures to mind. It’s all pure genius.

Coheed and Cambria – “Key Entity Extraction I: Domino the Destitute”
The new Coheed and Cambria album, The Afterman: Ascension, is one of the best I’ve heard in awhile, but this track in particular struck me as pure gold among the gems on the record. It has complex, melodic gutiar riffs, soaring lyrics, and a tight rhythm section that knows how to bring the noise. The track truly features all Coheed has to offer.

Foo Fighters – “Walk”
The Foo Fighters are one of my favorite bands ever, and their latest, Wasting Light, may be my favorite of their albums. “Walk” represents the epitome of their material in my view. The track finishes off the album and it transmits the hard-hitting, dynamic theme perfectly, starting off with light, intricate guitar work, building through the choruses and finally blasting through the bridge as the Foo Fighters sprint all the way home through the final chorus singing “I don’t wanna die!” It’s catchy, it’s powerful and it has a great message.

Breaking Benjamin – “Dance With the Devil”
This track, off Breaking Benjamin’s Phobia, is probably one of the best they’ve ever written. As the guitars come in quietly, Ben Burnley softly sings “Here I stand/Helpless and left for dead.” These epic lyrics begin a song that displays the power of Burnley’s vocals, the intricacy of the guitars, and the complexity of Chad Szeliga’s drum parts. It’s powerful, passionate, and it rocks hard.

Matisyahu – “Two Child, One Drop (Live)”
This track comes off of Matisyahu’s Live at Stubbs: Vol. II, and it’s a long one, but you won’t be disappointed. It starts of with a very dark, ambient section, kicking it up for a rock section in the middle. Then, out of left field, Matisyahu brings in Yehuda Solomon from the Moshav Band for a dope hip-hop section. While Solomon croons in Hebrew, Matisyahu whips out his signature rap skills. All of this makes for one sweet song.

Trampled By Turtles – “Wait So Long”
Trampled by Turtles originated in Duluth, Minnesota, which is only a few hours north of my hometown, so I seem to connect to them on the similarities of our surroundings. “Wait So Long” is a fast-paced, super-charged bluegrass number that features everything from the raspy voice of Dave Simonett, to the sprinting banjo and mandolin. It also includes one of the fastest fiddles I have ever heard. The song produces an intense sound, and it is what I like to call “the heavy metal of bluegrass.”

“The ingredients stirred into my portion of the mixtape contain two distinct tastes, one to thrive your senses and one to drown them in a dreamy haze. Most of these songs have been my right-hand men through most important years of my life, while others have been recently discovered and I became instantly hooked to. Whether you’re looking for a song to jump around to or one with which you can stare at your ceiling while you’re surrounded by the comfort of your bed or living room couch, these songs will hopefully satisfy the mood of your desired fortune.”

Iron & Wine – “Communion Cups and Someone’s Coat”
Songs like this are the reason why Sam Beam is a folk genius. Not many guitar players have the precise picking style that he does, and on this song that impressive picking brings the track to life. “Communion Cups and Someone’s Coat” was written during the same time period as Our Endless Numbered Days, one of my favorite albums of all time. It has a much brighter touch compared to album highlights like “Naked as We Came” and “Each Coming Night”. The first time I heard this song, I was instantly hooked and listened to it countlessly. I can’t say much has changed today.

Tame Impala – “Mind Mischief”
“Mind Mischief” is a recent addition to Tame Impala’s catalog from their most recent record, Lonerism. Along with the inclusion of more electronic elements to their sound, they also incorporated a sense of funk. Not only does the bass part make a frontward appearance throughout the song, but the entire band cruises through most of the song with a driving and distorted lick in unity. In writing music, I always say that if a band creates the most beautiful and ear-catching of licks, they should never leave it. Tame Impala surely doesn’t let that happen.

Dirty Projectors – “About to Die”
To be honest, “About to Die” has been the song I often dance to in the shower. The chorus irresistibly hooks me into a groove that even my slippery shower floor can’t stop me from. Hearing this live at Pitchfork Music Festival this year brought the biggest joy to my heart.

Radiohead – “Weird Fishes/Arpeggi”
First, let me get something off of my chest. Radiohead is my favorite band in the entire galaxy, so it was extremely difficult to designate one song to satisfy the mood of this mixtape. Though, after thinking back at their performance at Bonnaroo this year and the obsessive fan persona that I took on for the night, I knew exactly what song defined that performance for me. “Weird Fishes” is a track that exemplifies how well the band plays as a unit, whether it is defined through the Greenwood and O’Brien’s call-and-response guitar melody in the verses or the beautiful calmness that eases towards the conclusion of the song. The track makes me feel like I’m swimming in a bright aquatic dream, which is a perceptive change is that rare in my book.

Frank Ocean – “Monks”
As shown through “Mind Mischief”, I definitely have a particular taste from dominant bass parts, especially when they are fueled by the most contagious riff. In “Monks”, Ocean calls for a more minimal structure compared to the rest of channel ORANGE, but it still serves as one of the most dominant sounds on the record. To add, Ocean’s lyrical genius definitely shows within the comparison of finding a form of life within the shoves and dives of the mosh pit and the enlightenment, both physically and mentally, that monks would have within the same fashion. Get funky, and dig deep into this track.

James Blake – “I Only Know (What I Know Now)”
James Blake listeners discovered that this killer post-dub DJ could sing through Klavierwerke, especially on this track. His delicate vocal loops accent his synth and keyboard parts perfectly, ultimately producing a gorgeous harmony in the air. This is song that fills every space in a room, even though it only contains a few lyrics and one dominant melody.

Outkast – “Slum Beautiful”
“Slum Beautiful” is one the reasons why Stankonia is such a stand-out hip hop record. In this song, the duo keeps a similar structure as their standout singles, but throw their listeners for a loop. The basis of the song thrives off an extremely irregular drum beat and a guitar part looped in reverse, ultimately requiring each performer to reach their peak of creativity for each part. Andre is his most soulful, Lucious Left Foot is at his most complex and rhapsodic of rhymes, and Cee-Lo successfully contributes a verse that is very much out of his character. Not to mention, the lyrics describe one of the most unique interpretations of love known to the black books and confessions of the genre.

Ariel Pink’s Haunted Graffiti – “Live it Up”
In my opinion, this one of Haunted Graffiti’s coolest songs. It’s almost as if the band places the listener in the middle of a song-based accordion. The beginning feels like something complex and scrunched together, but within the verses, the band opens the sound up and spreads each instrument apart. As the song progresses and each part is revisited, it’s quite the journey To add, Ariel sounds like this song is legitimately exciting and fun to sing, which is a carrying characteristic through their most recent album, Mature Themes.

Grizzly Bear – “Lullabye”
Daniel Rossen is a guitar player that must have memorized every single guitar chord known to music. Grizzly Bear always has the most unique sounding songs because every song is tossed in numerous key changes, angelic harmonies, and brilliant instrumentation on every end. “Lullabye” is a song embeds all of these characteristics, which starts with the delicate bells and guitar in the beginning and proceeds through the full band crash within the climax.

Smashing Pumpkins – “Luna”
For the past year or so, this song has possessed the ability to warp my mind into the dreamiest state I could ever imagine. As soon as Corgan and Iha strum the opening chords, my eyes close, my mind relaxes and releases any tension, and the deepest and freshest breath is taken. This a perfect song for me when I’m tired of working on homework and just need a moment to stare outside and wander.