We revisit this review of the 2012 reissue of Mellon Collie and the Infinite Sadness as the album turns 25.

All too often we wax nostalgic, inviting the past to creep up on us with admiration. It’s a dangerous method of thinking that Woody Allen negates in his 2011 masterpiece, Midnight in Paris, in which actor Michael Sheen warns Owen Wilson that “Nostalgia is denial — denial of the painful present. The name for this denial is golden-age thinking: the erroneous notion that a different time period is better than the one one’?s living in. It’s a flaw in the romantic imagination of those people who find it difficult to cope with the present.” One must wonder, then, can we grasp an album reissue without succumbing to this “golden-age thinking?”

Where were you in late 1995? Were you old enough to drive? To drink? Were you even alive? If you had zipper blues, did you care enough to shake them? Did you know where your bones would rest? I had just turned 15 when The Smashing Pumpkins’ Mellon Collie and the Infinite Sadness surfaced; just before my final growth spurt shot me past six-feet tall. Skinny and lanky with glasses. That’s who I was then (and now, really), so I see Mellon Collie differently because it was during such a formative year. It was over half a lifetime ago for me, but I can honestly say after sitting with the album’s reissue for a little while now, the album goes beyond “golden-age thinking.” It was great in 1995, and it’s great in 2012.

To define Mellon Collie’s sound is still so hard to pinpoint because of all the different directions several songs travel. Frontman Billy Corgan plugs in aggressive guitars during the raging “Jellybelly” and sludgy “Where Boys Fear to Tread”, but plays a delicate piano on the instrumental title track. He plucks away on the acoustic during the quiet “Stumbleine”, but scrubs faux-joy during the musically jubilant “Muzzle”. It all makes for a double album that actually validates being a double album, and the end result features more successful mood swings in songwriting than many other bands’ entire discographies.

Every single, even the adolescent “Bullet with Butterfly Wings”, remains strong. Corgan’s voice was always an acquired taste, but once acquired, it’s the music that carries the singles home. “Zero” contains lyrics both mean and ugly, but it’s Jimmy Chamberlin’s percussion and layered guitars that pound the point home. “Thirty-Three” is a search for answers that’s tucked into bed by haunting guitar and piano. And “Tonight, Tonight” … what a song. Still. However, it’s the deep cuts that transform the record from a rusted relic into a constant revelation. The subdued orchestration slightly underneath “Galapagos” brings the chills. The epic “Porcelina of the Vast Oceans” drifts the listener off to a distant shore of some fictional beach out of dusty, classic literature, gently rocking back and forth in between the rough tides that arrive throughout. “An Ode to No One” is what a strobe light sounds like, but safe for those prone to seizures.

Ranking: Every Smashing Pumpkins Album from Worst to Best

Ranking the Album: The Smashing Pumpkins’ Mellon Collie and the Infinite Sadness

In addition to the remastered album (and continuing on from the band’s previous reissues), Corgan added bonus tracks for Mellon Collie’s deluxe box set. However, instead of just one bonus disc, there are three (count ‘em, three) additional discs to the original double album. We now have “Tonight, Tonight” separated from its strings. There are different mixes (“Love”, “Zero”), different takes (“X.Y.U.”, “Thru the Eyes of Ruby”), jams (“Glamey Glamey”), and songs that didn’t make the album. A few of these cuts originally appeared on the Pumpkins’ 1996 singles box set, The Aeroplane Flies High (including its title track), only now they’re remastered.

With 64 bonus tracks to indulge, there’s much to sort through, which makes it an obvious treasure trove for longtime fans. Aside from rarities, if you really want a peek into Corgan’s decision-making process during the Mellon Collie sessions, you’d be hard-pressed to find a better way inside than this reissue. The remastering itself affects the record little (it’s always sounded pristine). Any additions to the audio are found in the heavier music, volume-wise, and the slightly pressed-up vocals in the quieter moments. No issues here.

Today, Mellon Collie and the Infinite Sadness doesn’t need rose-colored lenses for appreciation. The album’s success still lies from all the stylistic risks the band assumed, especially in comparison to music other alternative bands were creating at the time (back when “alternative” was still an actual genre). Over the last 15 years, the world has changed multiple times over, but the Pumpkins’ long-celebrated double album hasn’t. So, why get nostalgic with golden-age thinking when the record never left us in the first place?

Buy a copy of Mellon Collie and the Infinite Sadness here… 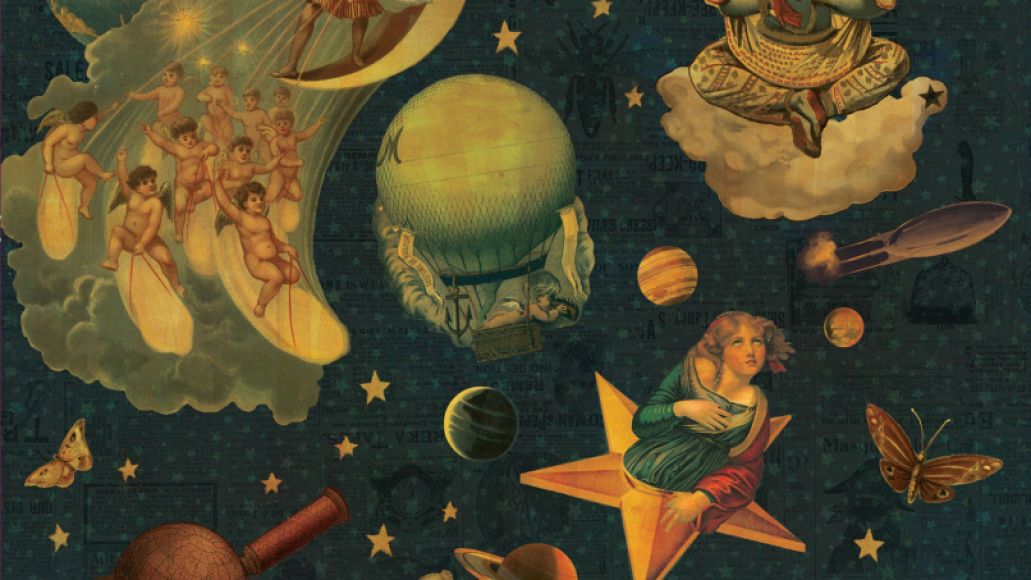