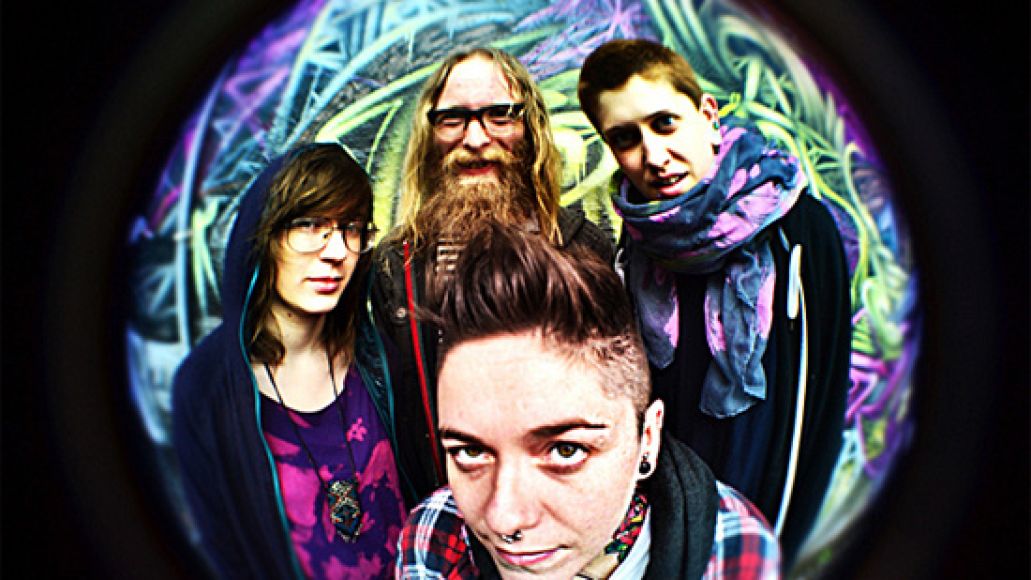 Here’s what happened the first time I ever listened to Glaswegian noise-rock outfit Divorce:

I sat down at my desk, put on my headphones, opened up the folder with their debut self-titled LP (available now via Night School Records), and clicked on the track “Bill Murray” because I had recently watched Zombieland.

What exploded from the innards of my computer, out through my moderately-priced buds, and forever seared itself into my brain was some of the most disturbing and intense dissonance I’d ever consumed. I liken it to a blood-and-feces soaked madman tackling me to the ground and speaking tongues through a megaphone while violently headbutting his cracked guitar, all while M80’s exploded just inches from us.

I relay this primal fear and mental anguish to drummer Andy Brown. When I add I wasn’t the only one experiencing such raw emotions, he takes a pause, and in his own Scottish accent, has himself a hearty laugh.

Divorce aren’t terrible people. Amidst our conversation, Brown is thoughtful and earnest; I even feel he’s being earnest when he tells me to enjoy my post-interview cheeseburger. But there’s a lot to understand about who the band is and why they make the music they do.

It all started back in 2008, when Brown, guitarist Vickie McDonald, and bassist VSO formed the outfit after years of living in a scene that didn’t quite accommodate their own musical leanings.

“I have this general idea that it seemed to be like this in every city,” Brown says. “You have lots of bands replicating other bands of that city, which for us is like Franz Ferdinand and Belle & Sebastian. It’s people basically being copycats, and we just got a bit sick of it. But instead of just moaning and always grumbling, we did something about it.”

And that something spread, with loads of experimental, noisy bands popping up right around the same time. But here’s where the band starts to show their true colors, welcoming the camaraderie just short of declaring themselves members of a living, breathing scene.

“There were quite a few noisier bands that popped up right with us,” Brown says. “Like Ultimate Thrush, they’re just aggressively fast and a little more intelligent. It’s nice to have the same people channeling that energy, to have it feel like a real kindred spirit. We were wanting to do something completely different. But, we’re stubborn people; we don’t need any sort of ego massage.” 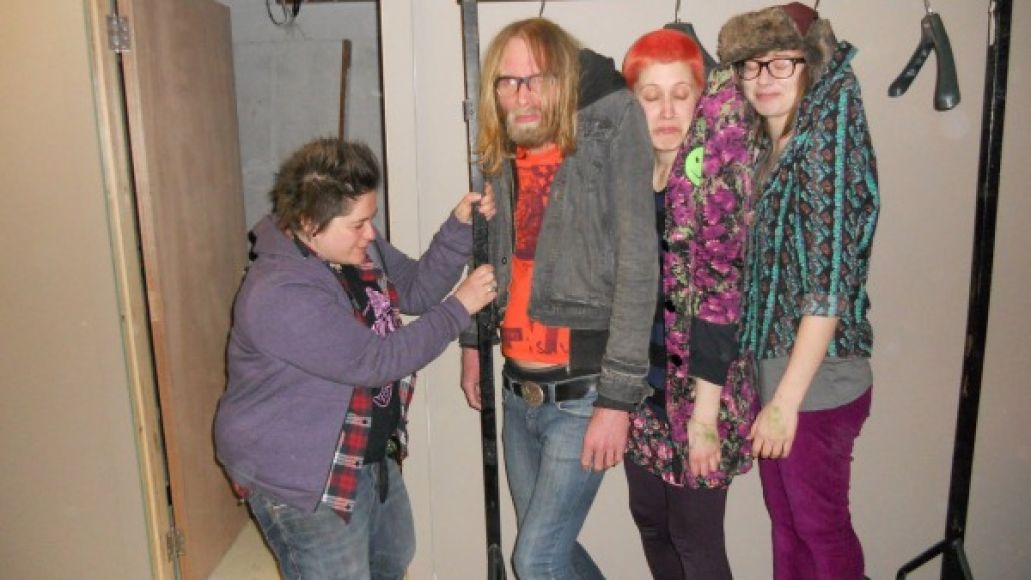 Again, they’re not purposefully being cruel or conceited. But having been musicians for some time, fully aware of the up’s and down’s of a scene, the band instead focused on building relationships based on a more meaningful sense of friendship than an allegiance to a genre.

“If there’s another band who we kinda sound the same as, we won’t play with them if they’re a bunch of assholes,” Brown says. “Our first EP, we did a split with Optimo, who are known more for their club night and electronic music. It was about us being friends more than any musical link. And it was a surprise for people who followed them and people who followed us.”

Not that following them is easy. While they spent a lot of time working to eschew musical boundaries, they spent just as much battling the idea of being one of the plentiful bands of Glasgow, which touts prominent scenes of everything from indie-pop to drum and bass.

“We’re not one of those bands who play to friends,” Brown says. “We made a specific point to get out of town as often as we can and play outside of our comfort zone. If you play to the same faces every month, it gets sickening. In terms of Glasgow, it’s not like we have purely strong ties; we’re all not Glaswegians. It’s just a place we all happened to live. Geography got us where we are.”

That, and a loyal dedication to each other. It’s a courtesy that even extends to band members who are no longer part of the group. In late 2010, vocalist Sinead Youth and guitarist Hillary Van Scoy departed to form Palms. Picking up the pieces rather quickly, they recruited American singer Jennie Fulk, who lucked out over every other replacement in rock history when the band decided to leave their old material behind and focus solely on new stuff. It’s tantamount to making all new friends every time one moved to Iowa.

“Vicky and I have known each other for, shit, getting on 17 years,” Brown says. “To keep playing the same songs meant they just wouldn’t have sounded the same. It made sense just to change everything. Plus, Jenny’s vocals are a completely different style, and it’d be unfair on her. I mean, Dio didn’t sound the fucking same as Ozzy.” 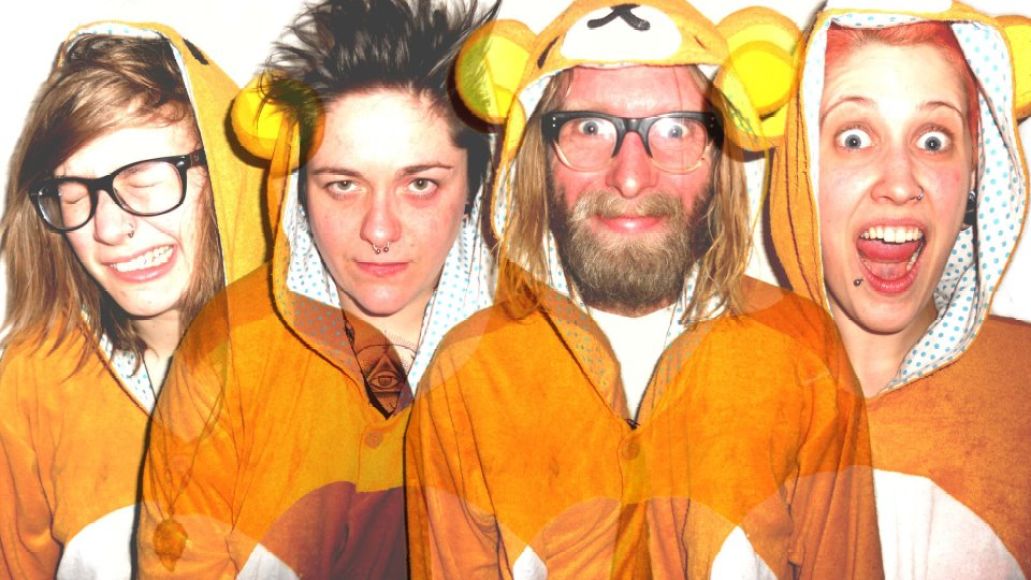 And it also didn’t hurt that the shift reinvigorated the band musically. It’s arguably the point in which they started to pick up more steam, finding more attention with the UK press while lining up more and more of those beloved shows outside their hometown.

“The songs were good for what they were and then we moved on,” Brown says. “When you change the lineup, it’s a catalyst to write stuff. And we’ve compensated in different ways; we had one less guitar, so we made a downturn and got heavier. Which just changed the way we write entirely. We have a very short attention span, so time learning old songs could be better used writing new songs. Also, thankfully, we didn’t have a ‘Paranoid’ to play at that time.”

Who they are as individuals matters substantially in the scope of how they work. If they weren’t the people they were, most of their tunes would just be pure noise that keeps some people up at night, wracked with an unshakable sense that the world can be a truly ugly, violent, and generally gnarly place. It’s the faces under the mountain of fuzz that makes it all worth caring for in the first place.

“I think there’s basically two types of bands: those who wear their hearts on their sleeves, and those who think ‘oh, you don’t understand me.’ For us, this is not torture or to vent our spleens,” Brown says. “We make loud music because it’s fun. It’s a good laugh to be able to play so loud and angry. The more annoying the show, the better it is for me. You’ll usually see me grinning at the end.”

But don’t get it twisted: Being silly doesn’t mean they take their job any less seriously.

“There’s a difference between taking things seriously and taking things morose,” Brown says. “There’s plenty of big, ugly, epic, solemn bands who think everything has meaning. And then there’s all those pop-punk bands who only have fun and have no other meaning. We just like to sit and drink beer and write, and that’s enjoyable for us. If it was torture, no one would be in this band.” 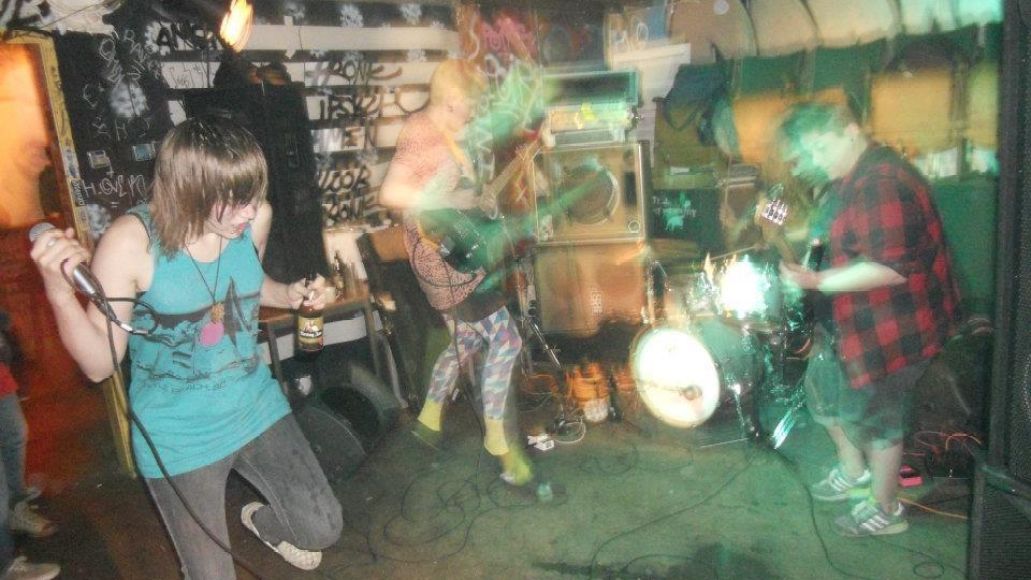 Together, those dichotomous concepts create a listening experience that’s as unpredictable as it is physically and spiritually jarring. No matter the reaction to any given song, there’s no denying the layers of poignant emotions that pour out with each tune. “Coat Your Throat” is comprised of little else but a snarling feedback loop and same random whispers. Combined, however, those elements create a sense of impending doom, as if something dark and ancient is dredging is way out of the speakers, aiming right for your heart.

Though they can certainly do slow and methodical, “Dreglegs” sees the band at their most triumphant: gargantuan drums akin to artillery fire, banshee wails brimming with vitriol, and jagged post-punk guitar dissonance forge the kind of unfiltered noise that sinks its claws into your eardrums and fights to remain until you’re practically begging for them to dig deeper.

But no matter the noises being blasted or the sentiments evoked, the glue that binds every element is the band’s interplay and vast musicality. While chaos and destruction abounds, the band control every guttural screech and disjointed guitar chord with calm and purpose.

That sense of purpose, wanting to pushing things as far and ferociously as they can, is another one of the band’s pronounced tendencies. They’ve pushed aside genres, cliques, and loads of conventions by operating under a rather dire set of circumstances: One day, all that remains will be the music. They may be Scottish, but the very American phrase of “Go big or go home” applies here nicely.

“Some bands don’t want to spread their wings and do things they might not be able to reproduce live,” Brown explains. “But I think that’s the complete 180 degree wrong way of looking at it. When a band splits up, and every band will split up, all that’s left of every band is what they recorded. If you’re saying, ‘Oh, this isn’t metal enough’ or ‘Oh, this isn’t quite indie enough,’ that’s shit. That’s exactly when not to do it.”

It helps that Divorce isn’t necessarily their sole focus. They all seem to happily have day jobs or other distractions, and the band is something they do less as a means to generate fame and money, and more as a means to indulge their desire for creative autonomy.

Of course, what exactly they’re doing is often the hardest part to discern. They may be very punk and DIY-centric, but the band admits there’s very little social or political context to their songs. There’s nothing much to take away but whatever the listener decides to take away.

“We’re not really a message sort of band,” Brown insists. “We’re not exactly poetically didactic, either. We’re not out to please anyone. It may be arrogant, but we don’t tell people how to live their lives, or how we live ours. If we tried to make music in a context, it’d be a disillusion. We can’t really think about things in that way. Do you change songs based on the perceived idea of how they will be heard? Cause you can’t begin to understand what other people are thinking.”

And since they can’t, the band won’t bother wasting their time with such tomfoolery. If someone loves the band, then the group’s more than pleased to have you aboard. If you hate the band, they’re only slightly sorry to not count you amongst the loyal. Instead, they’ll probably smile and move along, too focused with the task at hand to worry about bad press, animosity, or handling the collateral damage of their music.

“Opinions are like arseholes: everyone’s got one,” Brown concludes. “And we’ve got our own. We won’t lose sleep about bad reviews. I never understood why people get morally outraged about songs. It’s like, if you hate that, turn on the album you do like.”