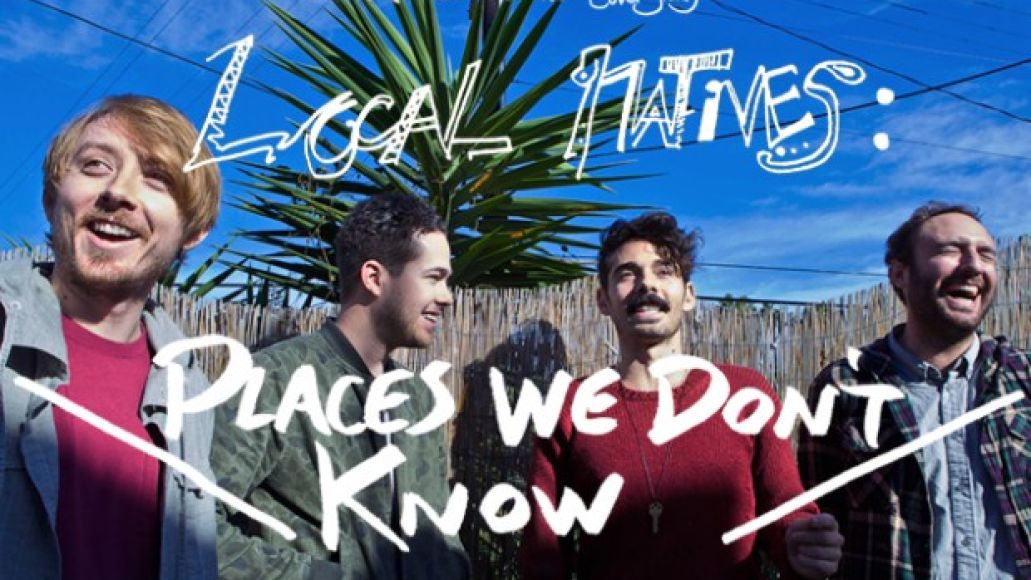 At its farthest west, Sunset Boulevard meets the Pacific Ocean, concluding 24 miles of one of the most famous roads in America with a postcard view of the world’s largest body of water.

You must travel east, and wind through the upper-class greenery of Brentwood, past UCLA and the base of the Hollywood Hills, and along West Hollywood’s Sunset Strip to arrive at the four-and-a-half mile icon of fame and opportunity that is Hollywood, a stretch mythologized in classic films, evoking terms like “big break” and “name in lights” to transplants arriving in busloads, ready to be discovered and banking on luck.

Leaving Hollywood, though, Sunset Boulevard doglegs south. For these final six miles, the street becomes the main thoroughfare for one of Los Angeles’ few genuine neighborhoods, where cars share the road with bicycles, dogs join their owners at crowded cafes, billboards alternate between Spanish and English, the late Elliott Smith’s infamous Figure 8 mural survives, and taco trucks, fruit stands, and other little perks pop up intermittently so that New Yorkers, Chicagoans, Austinites, and inhabitants of every other major city can take them for granted. In Los Angeles, the scenery of Silver Lake and Echo Park is more an exception than a rule, with its artists relying on hard work and community support as a means to success, leaving the “big breaks” for the dusty old VHS films sold in bulk at the Salvation Army.

On this mostly commercial stretch of Sunset, Local Natives have turned an abandoned building into a modest rehearsal and recording space. The small unit, perched on a small hill above the busy street, appears featureless on the outside save for a fenced-in patio to buffer the ceaseless road traffic below. Inside, the space is humble, with microphones and spare music accessories strewn with little order. There is a beat-up quality to the building, stemming from prior years of neglect, though soundproofing on the walls, a stocked kitchen, and a working bathroom fit all the band’s current needs. Still, with most of their instruments packed in their van from their previous night’s KCRW performance, little of the workspace resembles the scene a year earlier, when the band returned from the holidays to continue work on their sophomore album, Hummingbird, set for release on January 29th. Their hope in returning to their building on Sunset was for a fresh start, following a 2011 that fell short of their creative expectations.

“It ended up taking a little while for us to find our footing and develop what would be the sound of Hummingbird,” recalls singer/guitarist Taylor Rice, the first band member present at our scheduled meeting time and the most sight-recognizable with his Tombstone mustache. “We kept pushing and experimenting, trying to expand the palette of the sounds, as well as the arrangement techniques.”

One song would become the focus for singer/keyboardist Kelcey Ayer and singer/guitarist Ryan Hahn at this first session of 2012, a samba-leaning, Ayer-penned tune titled “You & I”.

“I was always trying to push this vision of the song and it just wasn’t working out,” Ayer explains after his wife leaves him at the door, sandwich in hand. His careful manner of speech and reflective Hummingbird songwriting speak to his maturity, no matter how much it looks like his mom just dropped him off at school. 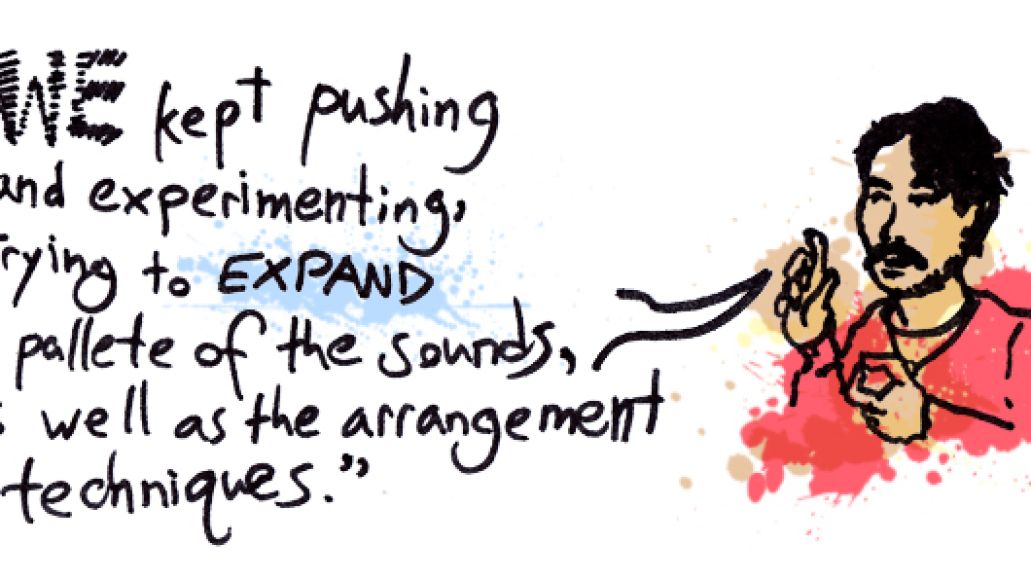 And though he definitely is more talkative after he gets some food in him, he is just as playful and irreverent as his bandmates when drummer Matt Frazier arrives, completing the foursome. Small talk centered around last night’s performance fills the space, and they are sure to include me, all while opening windows, cleaning off chairs, and gathering trash to make the space, and myself, comfortable. It was a familiar invitation into the Local Natives fraternity, one usually offered at their concert or on their album, lasting until the lights come up or the record ends. Now the invitation has extended here to their little space on Sunset, at least until we finish discussing their new album, and the long road they took to make it.

As the pair struggled with a solution for “You & I”, a sudden “breakthrough” resulted in them finishing the song that same night, a memory that perks up the often-silent Frazier, who adds, “We all got really excited about it, and a lot of songs came from that excitement.”

Ayer agrees, noting from that moment, “the next three months saw us writing half of the record. [‘and You & I’] made it okay to explore some more synthetic sounding places.”

In a later interview, producer Aaron Dessner notes the importance of the song from a more detached perspective, seeing “You & I” as “the biggest departure sonically for them but not in a trivial way. It works so well as a song and the sound world feels like a natural evolution for them, even if it is quite synthetic.”

The song, no longer a samba, opens Hummingbird, and it’s Ayer’s all-in vocals that sell both the song and the album from his very first cry of the title. And, despite the band’s pride in the song’s aesthetics, Ayer’s lyrics are equally crucial, grappling with uncertainty, acknowledging the fear that comes from “places we don’t know,” places both internal and external.

Months later, Local Natives would leave their Los Angeles homes and travel north to Montreal to track Hummingbird, then continue east to record the album with Dessner in Brooklyn. The drive into the unknown forces growth and adaptation by removing elements of comfort and routine, revealing a part of yourself that was missing, illuminating priorities that familiarity and stability tend to mask.

“The vibe of the whole record for us was trying to get out of our comfort zone and try something new,” says Ayer, well aware that sometimes the road turns sharply without warning, and adaptation becomes less about growing and more about surviving.

“We originally wanted to go to Berlin,” says Rice, of the decision to track in Montreal. This acknowledgment stirs a frenzy of simultaneously shouted ideas and suggestions that were toyed with for the initial tracking sessions. “We almost went to Sweden” is followed by “I wanted to go to Belize,” along with multiple answers lost in the commotion and laughter.

“We wanted to leave L.A. because we had been here for a year,” Rice explains, speaking quickly like he’s given this speech 100 times. The band’s travels are a pillar in the discussion of Hummingbird, but some local fans have reacted to the decision poorly, and Rice seems tired of defending it. 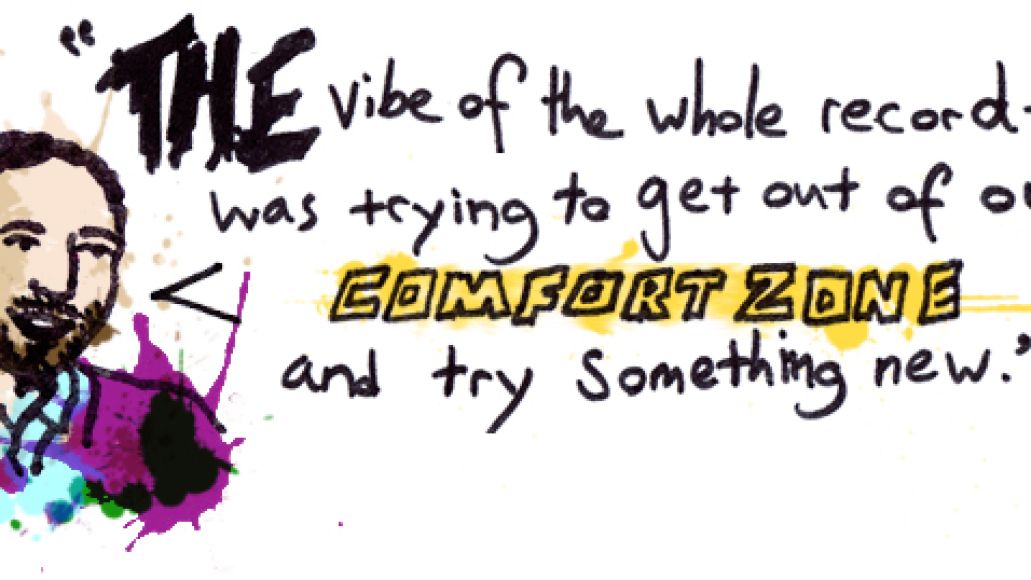 “I mean, we made most of the record here, we wrote most of it here,” he continues, “it started to come out, like, ‘You moved to New York to make this record.’ That’s not true at all. We wrote it here. But, we wanted to get out of L.A. to be away from distractions and also put ourselves in the state to be open and push ourselves. I think going to a new location, putting yourself in that environment, can affect that in you.”