My inaugural (and final) trip ever to Atlantic City was leg one of a two-leg excursion where I spent the final two days of 2012 with members of the hip-hop duo The Throne. ‘With’ is a very loose term, of course — while Kanye was holed up in the Penthouse of Atlantic City’s opulent new Revel, I was sleeping over the covers in room 4016 of the grimy and dank Tropicana. Ye and I probably dined at the same restaurant — though not intentionally, as my ill compensated waiter can attest. And while the Revel was cutting Kanye a check for an ungodly amount of money they don’t actually have, I was watching a friend win $90 at a $15 limit blackjack table and imagining the well liquor we’d be drinking in celebration. 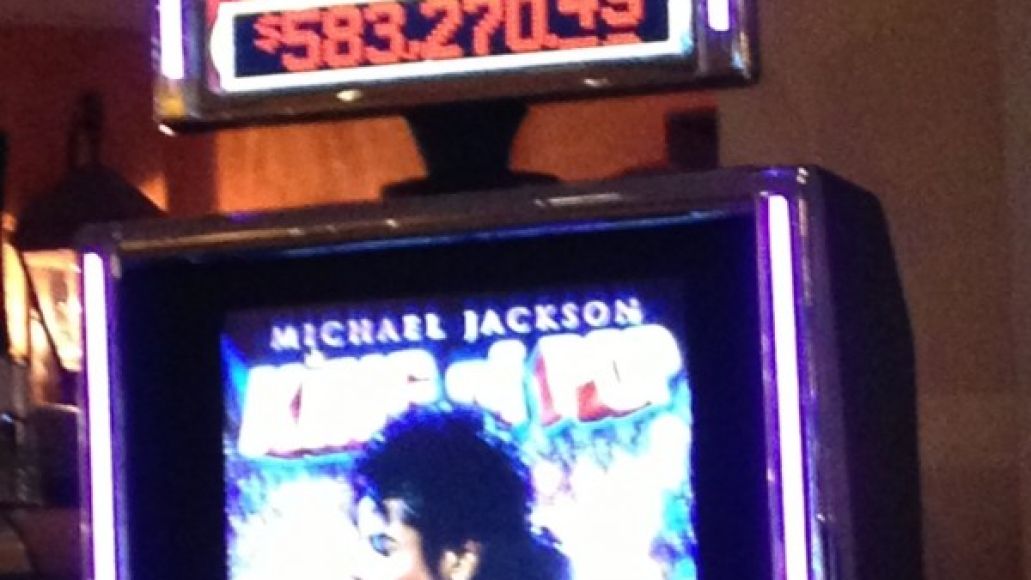 2:33 p.m. – I take a cellphone picture of a Michael Jackson-themed slot machine and am quickly greeted by one of the members of casino’s security task force. It was like that time when I accidentally took a picture of the ceiling of the Sistine Chapel and got yelled at in Italian.

2:45 p.m. – P.F. Chang’s for brunch; we opt for apps and beer so that we can save room (and money) for a big fancy dinner. The Flaming Red Wontons are incredible. I also recommend the Spicy Green Beans.

4:15 p.m. – The $15 Blackjack dealers don’t have pockets. No shirt pockets, no pants pockets, no anything pockets.

4:55 p.m. – Everyone already knows this, but casino owners are really the most intelligent people alive. Want to play a fun game? Try to pick out all the things the casino does to make you drink more and spend more. The lack of clocks is the obvious one. At the Tropicana, they paint the ceilings sky blue, so it constantly feels like high noon. Happy Hour at the casino floor bar runs from Noon to 10 p.m.. The vending machines take credit cards. The wine store sells wine in a flask and calls it Flasq.

5:00 p.m. – Speaking of Happy Hour at the casino floor bar, they clearly don’t invest a lot of money in live entertainment. At first we think it’s a karaoke bar — but then we realize it isn’t.

The Karaoke singer plugging $2 drafts, $3 wines, and $5 well drinks is more tolerable than her singing of “Call Me Maybe”, “Crazy In Love”, and “Diamonds”.

7:00 p.m. – We make our way to Revel to pick up tickets for Kanye West’s third and final show at the Revel. Think of the Revel as the type of casino Kanye would build. Whereas the Tropicana has a Mrs. Field’s cookie stand and Starbucks, Revel has a Hugo Boss store and an actual food truck parked on the third floor. Revel’s casino floor has flashing lights (lights, lights), and the hallways are littered with furniture that no one actually sits in and these light fixtures that glow as you walk under them. 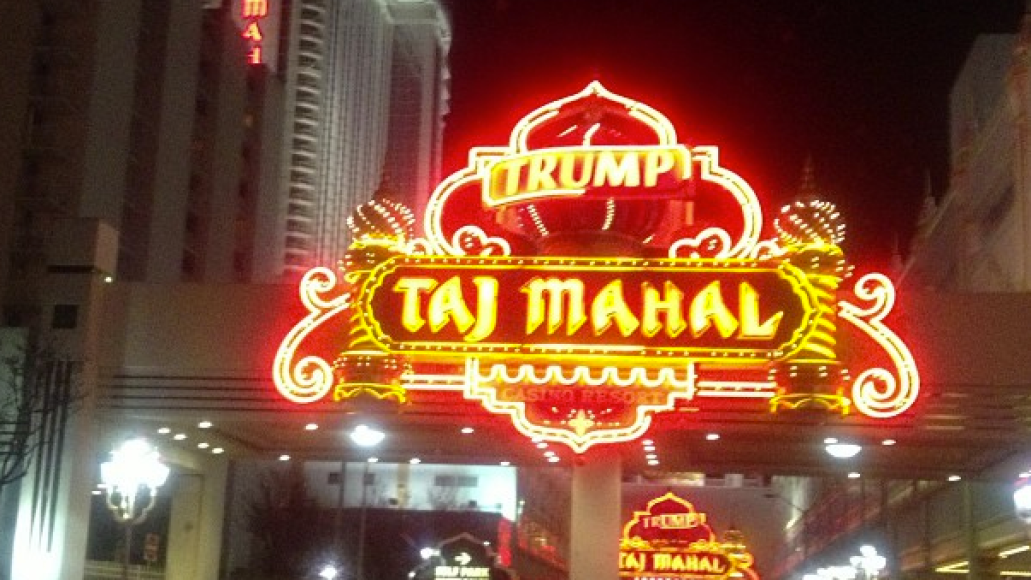 8:35 p.m. – Shockingly, Robert’s charges $150 for a steak and most of the clientele look like ex-mob members — yet we decide to sit down. Someone throws out the “We’re in Atlantic City, might as well enjoy ourselves” rationale and the value of United States currency becomes inconsequential.

10:30 p.m. – The previous two nights didn’t begin until 11 p.m., which is why I go from walking to running toward the Revel’s Ovation Hall as I hear the sounds of “Power”. Our seats are in the 100 section, but the few security members found in the venue are oblivious to there even being a concert. We walk through the first door and onto the floor. 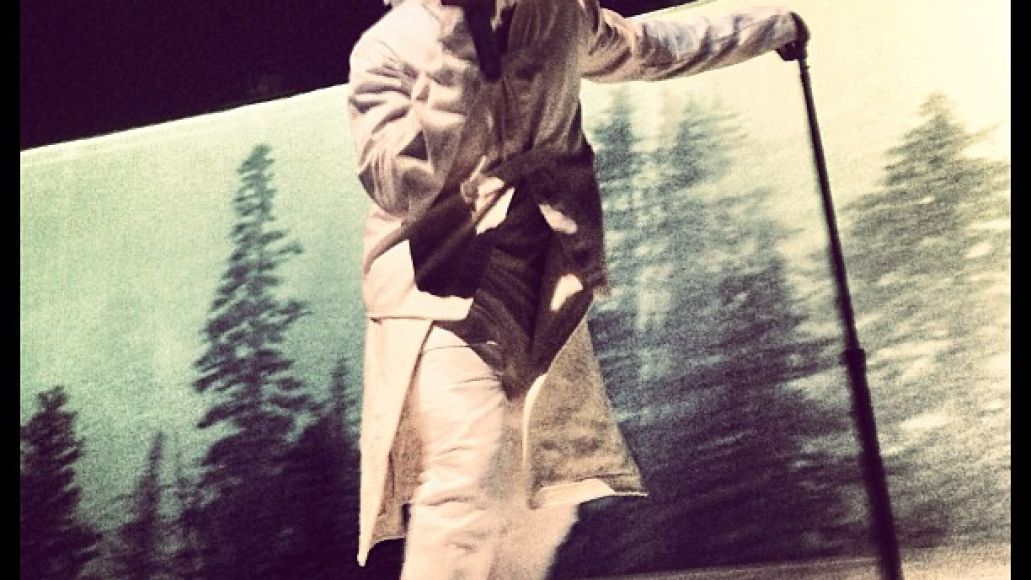 Friday night’s show at the Revel was a dress rehearsal for things in the future. By Kanye West standards, this 80-minute performance was forgettable, an extended version of his 12-12-12 collage. Half of the set comprised of quick hitting verses from Cruel Summer or collaborations with Jay-Z, Rihanna, and 2 Chainz. The rest was great, but no different than what he’s been doing for the last two years, and there was a serious lack of material off My Beautiful Dark Twisted Fantasy.

Instead, Kanye was at the Revel for one reason: to see what fun new things he could do and wear with a sizable production budget, an intimate music venue, and no accredited members of the press.

A Cruel Winter has been talked about for several months now — though no one really knows what it is or when it will surface. As you’ve surely heard, Kanye’s three Revel shows had a rather frigid theme: Kanye wore an all-white suit and a Yetti-like mask, and the seven video screens that encompassed the stage frequently displayed arctic imagery. He also pumped in artificial wind and snow during performances of “Say You Will” and “Heartless”. For a show at a casino, it was impressive as fuck. But anyone looking for answers left with none. There were no new songs, and Kanye never once addressed his future intentions or the thing on his head.

Who knows if that even matters now that he fell in love with Kim Kardashian. There’s a very good chance that this show and its stage setup and whatever Kanye achieved will lay waste alongside the forgotten Gaga tour and the CRS album. He’s a genius with ADD, and with a kid on the way, it’s anyone’s guess what the next two years of his career will look like. Critics will scoff at that notion as they point to Kardashian’s television career. But Kanye has always been one to cherish his immediate family, and if he follows the lead of his biggest mentor, then it’ll be some time before he’ll be making music headlines again.

One thing I can conclude though: Most of the audience received comps — so if you want to go to a free concert in a pretty cool venue and don’t mind Atlantic City, then go to the Revel. 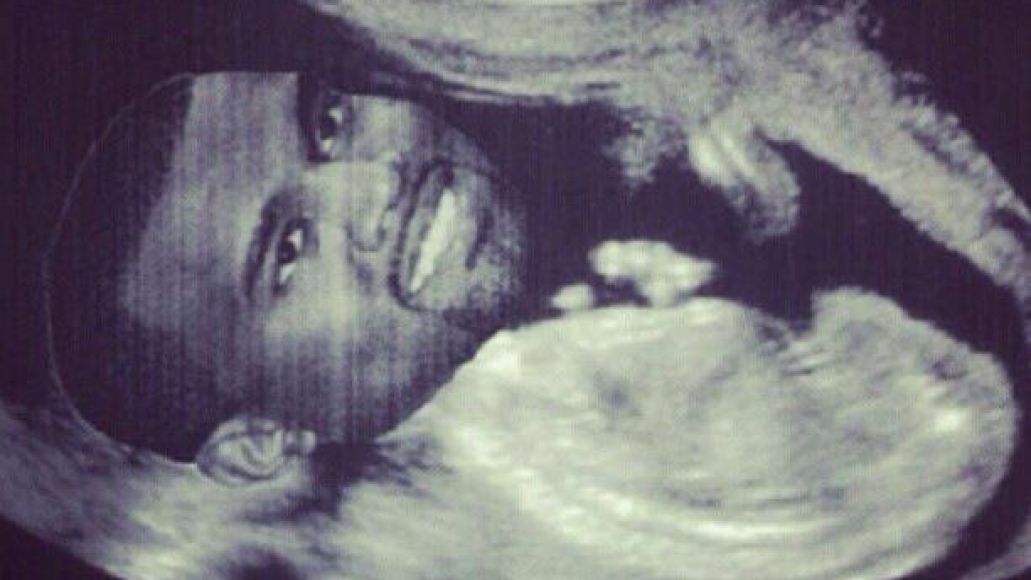 12:20 a.m. – I write news for Consequence of Sound, so I rush home to write up the Kim pregnant story.

9:10 a.m. – On the bus, this one guy calls everybody he knows to inform them of his impending stay at the W Hotel. “It’s where Drake and Diddy stay. I like to stay where they stay,” he explains as he repositions his legs to one of the three feet of leg room and glances over at all the annoyed, hungover derelicts (myself included) who wish they possessed a samurai sword, because no one gives a shit about Drake and Diddy’s hotel of choice.

9:50 a.m. – This other guy on the bus is getting up to go to the bathroom for a third time — and he brings his luggage with him each time.

11:30 a.m. – In an odd twist, our Greyhound bus successfully completes its journey with no problems, only to break down three feet away from its gate at Port Authority.

Watching the Throne: A Tale of One Writer's Unluxurious New Year's Weekend