Kevin Shields never needed to follow up Loveless. My Bloody Valentine’s critically acclaimed sophomore album thwarted critics, artists, and fans alike in November 1991, and decades later that hasn’t changed. The album — from its glossy, candy-coated artwork to the 11 tracks that span 48:36 — floats in a timeless vacuum, similar to Arthur C. Clarke’s interstellar monolith in 2001: A Space Odyssey. It established a watermark for the genre and warped people’s perspective on rock ‘n’ roll; as Chuck Klosterman once wrote, “Whenever anyone uses the phrase swirling guitars, this record is why.”

Now there’s m b v, the next chapter in My Bloody Valentine’s brief catalog of work. Since its mid-’90s inception, the album’s been plagued with hiccups, stemming from personal meltdowns to outright rejections. To Shields’ credit, he’s always remained steadfast at doing the unthinkable, teasing fans with histrionic statements like, “We are 100 percent going to make another My Bloody Valentine record unless we die or something.” So, naturally, whatever came after Loveless was destined to be an event.

And that’s always been the problem. Such events are typically met with a box of tissues and overwhelming disappointment, especially for something stewed in years of hype and trepidation. (Think of it this way: There’s only a few success stories like Brian Wilson’s Smile, but there are countless cautionary Chinese Democracy tales.) With m b v, an album that will forever be preceded by the title card “21 Years Later”, it falls into that rare moment where one’s tortured genius is both appreciated and understood. That’s because there isn’t a more fitting album Shields could have created.

m b v is a seamless transition from Loveless. Hit play on “Soon”, let it ring out, and wait for the jet-lagged reverberations of “She Found Now”. The track’s mercurial sighs and ionized guitar lines nearly echo from its predecessor. The whole thing drips with this syrupy emotional residue that’s always been one of the fascinating hallmarks of My Bloody Valentine. The gummy distortion soothes like a warm hug from a close friend you initially thought was dead, which by all means is a proper reintroduction to our dusty adorations for such a left-field outfit.

But that’s “all part of the plan,” as Shields eases everyone into this album by trotting off with a number of tracks that feel relatively similar to Loveless. Stuttering guitars (“Only Tomorrow”), seasick distortion (“Who Sees You”), and spectral overdubs (“If I Am”) should pencil in smiles on those who’ve long eroded “What You Want”, “Loomer”, and “Come In Alone”, respectively. Even the funky, jovial nature of the straightforward, Belinda Butcher-led “New You” should recall the accessible mall culture stylings of “Soon” — and there’s absolutely no reason why anyone wouldn’t adore the little drops Shields injects here.

It’s not until the last three tracks, however, that m b v really starts pushing My Bloody Valentine ahead into its future. The jangly jungle grooves of “In Another Way” boil over house beats and adventurous guitar lines that crunch and undulate beneath a beacon of synths. It’s an abrupt pace that’s soon outmatched by the post-hardcore drone of “Nothing Is”, which is then surpassed by the inflight catastrophe of “Wonder 2”. And finally, after six frantic minutes, the album’s wind tunnel coda cuts off abruptly like some lost transmission.

Sequencing plays a vital role in m b v. For the most part, it’s a standard climb that scales higher with each sequential track, but it’s the swift throttling towards the mesosphere around track seven, “In Another Way”, that separates the album from Loveless or their oft-neglected 1988 full-length debut, Isn’t Anything. It eschews the heart and gnaws right at the brains, shifting their one-of-a-kind brand of shoegaze into something that’s startling, visceral, and almost apocalyptic. It’s as if Shields wired together an aural mission statement that dutifully orchestrates what was and what will be for My Bloody Valentine.

“I wanted to see what would happen if I worked in a more impressionistic way, so that it only comes together at the end,” Shields told NME last year. It’s not the most orthodox way of creating an album, but it works wonders for m b v. Just as the cover art’s subdued earth-toned blues imply, it’s a decompression from the otherworldly expedition that is Loveless. While that doesn’t make it a better album than its predecessor, it doesn’t have to be. Instead, m b v creates a new timeline for My Bloody Valentine, and one that recalls the past in a broader and bolder light. They’re better for it, their catalog is stronger for it, and by album’s end, they’re still the best at swirling guitars. 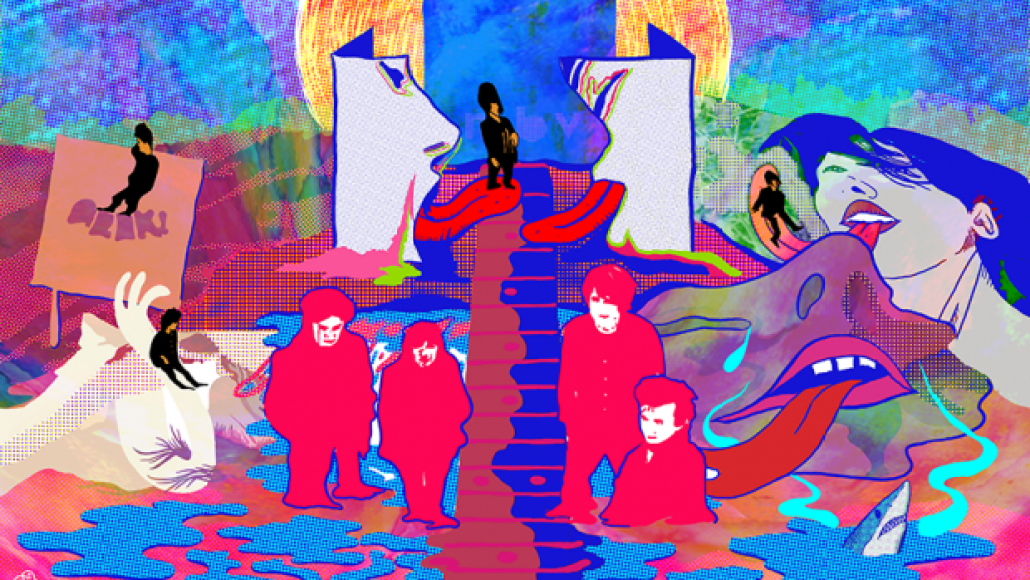