Editor’s Notes: Nick Cave and the Bad Seeds’ Push the Sky Away came out February 18th, 2013. As Zach Schonfeld suggests below, the album came at a time when critics and fans alike were beginning to have doubts about Cave’s future as a recording artist. Luckily, Cave turned Push the Sky Away into the beginning of one of the strongest creative stretches of his entire career. Check out Schonfeld’s classic review below, which originally published on release day.

This year marks the 30th anniversary of the Nick Cave and the Bad Seeds. The arrival of Push the Sky Away, however, falls close to another: the 10th anniversary of 2003’s Nocturama, widely regarded as the group’s weakest — or at least most disjointed — studio effort yet. To many critics, still reeling from the all-consuming balladry of 2001’s No More Shall We Part, the record was proof positive that the King of Noir had lost his edge. In Allmusic, Tim Sendra’s verdict was especially unflinching: “It is truly sad when artists with great vision and imagination, whose work is filled with power and beauty, just kind of lose it all at once.”

Joke’s on us, I guess, because reports of Nick Cave’s creative death have been greatly exaggerated. With Grinderman and its Bad Seeds counterpart, 2008’s Dig, Lazarus, Dig!!!, Cave relit the fire in his loins for brash garage-rock numbers like “No Pussy Blues” and “Dig, Lazarus, Dig!!!” With Push the Sky Away, he leaves that era behind and rushes into the unknown for an astounding work of sparse, trembling noir-rock.

The lesson here is that Grinderman regained a sense of urgency that can be expressed well beyond their coarse, primal vocabulary. Richly arranged, masterfully sequenced, and full of brooding, Push the Sky Away combines the stately beauty of The Boatman’s Call and No More Shall We Part with the intensity of Grinderman/Lazarus-era Cave while managing to sound like neither. For that matter, it sounds unlike anything the Bad Seeds have done before. Like Leonard Cohen’s I’m Your Man (a favorite of Cave’s), it’s an unexpected late-period masterpiece, full of self-reflexive humor and jarringly modern lyricism and musicality.

The album’s lush dynamics likely stem from the 2009 departure of Mick Harvey, Cave’s guitarist and collaborator of over 30 years. With the absence of a prominent lead guitar, the arrangements emphasize small ensembles of bass, strings, bare guitar plucking, and — especially — Warren Ellis’ minimalist loops, described by Cave as “its tiny, trembling heartbeat.” Some highlights are entirely without guitar. The disarming opener “We No Who U R” grooves steadily on synth layerings, flute scales, and what may be the Bad Seeds’ first use of a drum machine.

Even Cave’s piano takes a backseat on the album, leaving plenty of open space in the mix. Odd organ drones and female voices add texture, rounding out the singer’s most soulful vocal performance since perhaps The Boatman’s Call.

The songs assemble themselves from deceptively simple openings — on “Mermaids”, a lone, gurgling guitar; on “We Real Cool”, a single-note bass rumble — that evolve into rich climaxes full of string and keyboard flourishes. “Mermaids” blossoms into a gorgeous, flowing chorus to match its title; on the similarly themed “Water’s Edge”, a chaotic jumble of grinding bass, breathless tales of “city girls” (“their legs wide to the world like bibles open”), and a relentless violin riff, it’s a sudden moment of respite: “It’s the will of love/ It’s the thrill of love/ Ah, but the chill of love is coming on,” Cave warns, violins swelling anxiously around him.

The beauty and restraint on the album is coupled with an intensity that hearkens back to Let Love In or Tender Prey.  The patient “Jubilee Street”, a tribute to a murdered prostitute, has a stuttering tempo as Cave’s voice becomes more and more wrecked with urgency. By the final minute, the crescendo of slicing guitar and majestic strings fade into swells into oblivion.

For an artist whose thematic muses tend toward the biblical past, Cave stakes ground in contemporary territory here, name-checking Wikipedia and Miley Cyrus with equal fervor. The songs reportedly arose from “Googling curiosities [and] being entranced by exotic Wikipedia entries,” with a focus on “how on the internet profoundly significant events, momentary fads and mystically-tinged absurdities sit side-by-side.” These digital fixations arise on “We No Who U R”, with its Ke$ha-inspired title and lyrics that hint at privacy invasion in the virtual sphere, and “We Real Cool”, which finds Cave muttering, “Wikipedia is heaven/ When you don’t want to remember anymore.” Then there’s “Finishing Jubilee Street”, an eerie, spoken-word account of a dream involving a child bride. Cave begins by announcing he’d “just finished writing ‘Jubilee Street’,” a meta trick that calls to mind the recursive nature of Internet culture.

Then comes “Higgs Boson Blues”, a hallucinatory journey to Geneva that combines the weary blues of Neil Young’s “On the Beach” with one of Cave’s most sleazy drawls this side of “Watching Alice” (“Aaaah I’ve been sitting in my basement pati-oh/ Aaaaaye, it was hot!”). Over a steadily rising chorus of “Oooh”s, the tale grows increasingly demented and deliriously Seussian (“cleaning ladies sob into their mops and a bellhop hops and bops”), weaving visions of Robert Johnson, Hannah Montana, and sixteenth-century colonialism together in its stunning dénouement.

Maybe it’s a harrowing account of obsession and insanity in the information age, or maybe it’s just Cave having a laugh. These “momentary fads” and “mystically-tinged absurdities” — they are sometimes one and the same.

Pick up a copy of Push the Sky Away here…

Push the Sky Away Artwork 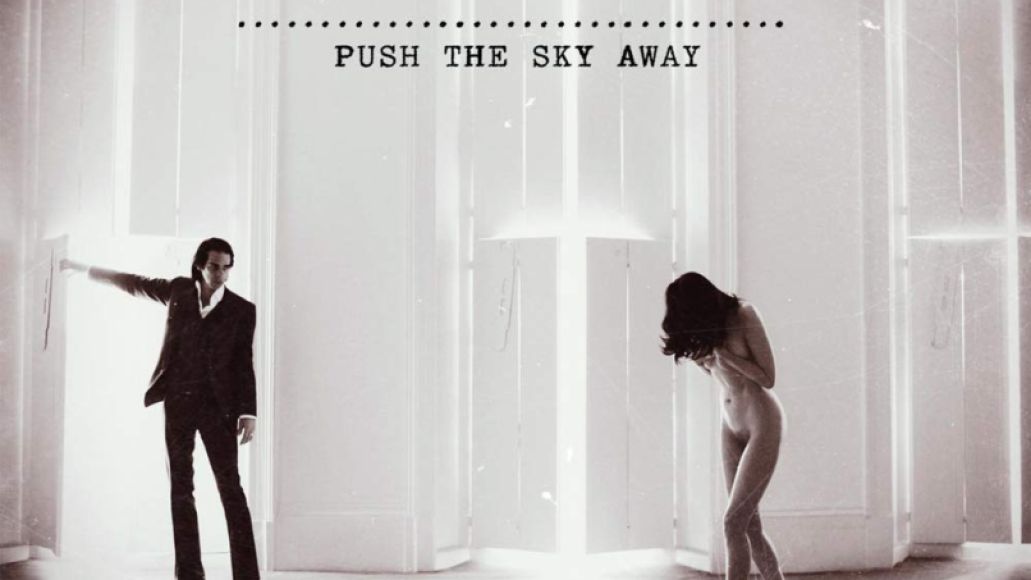 Nick Cave & the Bad Seeds Silence the Skeptics on Push the Sky Away: Review