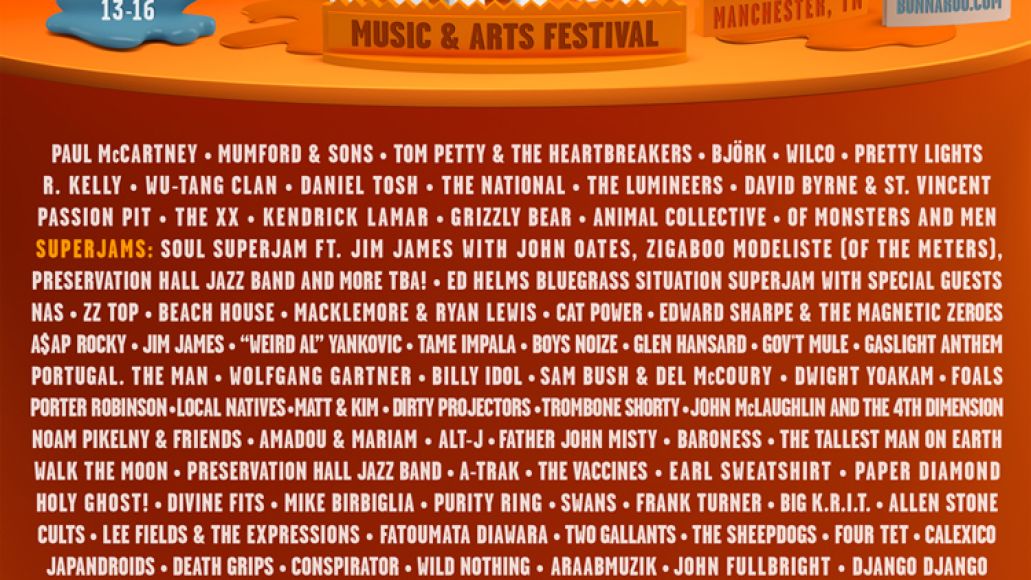 Yesterday, as my KPM proficiency was put to the test transcribing the Bonnaroo Lineup Announcement Megathon, this dawned on me: booking Bonnaroo must be a lot more difficult than booking Coachella.

Just think about it: Coachella takes places in April, and though its expansion to two weekends has undoubtedly made booking headliners and foreigners more difficult, the festival faces no competition. Fact is, there are no major music festivals that take place the same two weekends as Coachella.

However, during the same weekend of Bonnaroo 2013, festivals such as Isle of Wight, Download, Pinkpop, Hultsfred, Sonar, Nova Rock, and NorthSide take place in parts elsewhere around the world. Prior to today, these festivals have already booked The Killers, The Stone Roses, Portishead, Phoenix, Queens of the Stone Age, The Knife, Arctic Monkeys, Modest Mouse, Bloc Party, The Flaming Lips, SBTRKT, and more. (Here’s a column idea for one of you aspiring journalists: discover how much money a band can make playing three European festivals in one weekend compared to a one-off at Bonnaroo.)

Thus, when you factor in the competition, Bonnaroo’s 2013 lineup becomes all that more impressive. Regardless, festival promoters still managed to book three legit headliners and several others who will no doubt close stages at other American festivals. They also booked a formidable mid-tier portion of the lineup, locking in stalwarts (BjÃ¶rk, The National, Cat Power, David Byrne & St. Vincent), rising newcomers (Tame Impala, Earl Sweatshirt, Death Grips), and oddball veterans (Billy Idol!?!? R. Kelly?!?!?) Another fascinating trait of the lineup? There’s not a single reunion.

As of today, Bonnaroo has pieced together by far and away the best lineup of any North American music festival in 2013. It remains to be seen what Lollapalooza and Outside Lands have in the works, but at least in regards to Bonnaroo, not since 2009 have we been salivating at the idea of spending a weekend in the dusty, dried out confines of Manchester, Tennessee.