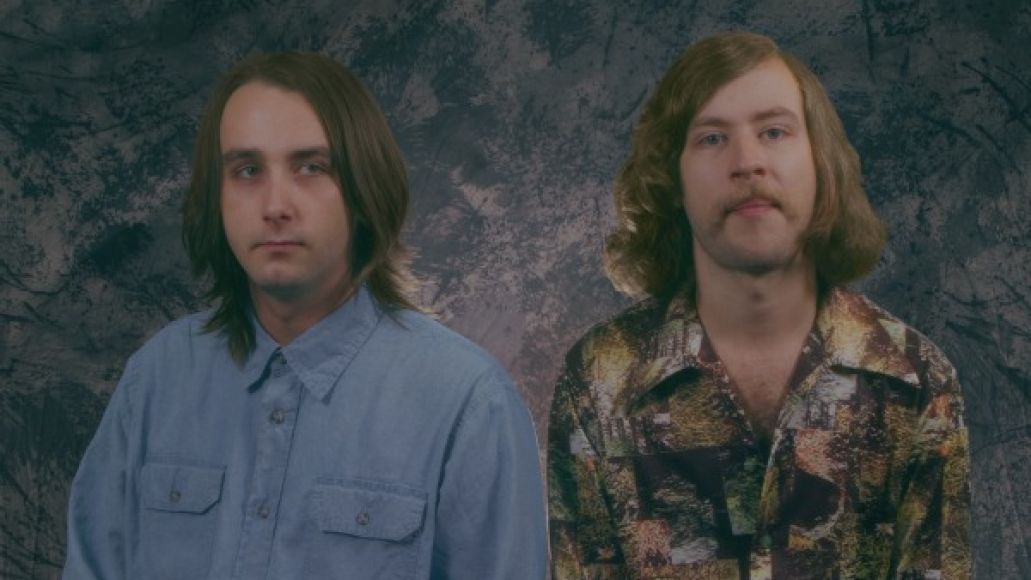 “The Hearse” will be released as a 7″ on March 5th via Polyvinyl. The B-side is a cover of Kraftwerk’s “Das Model”, which you can stream exclusively below.

Think about how many bands you know through even the most tangential connections: a beloved guitarist goes solo, a touring keyboardist starts his own group, heck, even someone’s cousin or half-brother decides to cash in on their kin’s notoriety.

On the surface, Portland’s Wampire are just another act clumped into that category. Their forthcoming album, Curiosity, was produced by Unknown Mortal Orchestra bassist Jake Portrait, who liked them so much he invited them on UMO’s recently-launched U.S. tour.

Wampire formed in 2007 after the longtime buddies Rocky Tinder and Eric Phipps moved to Portland, where they were gigging consistently and created a decent-sized niche. In the beginning, however, the group wasn’t the exact manifestation of the duo’s creative aspirations.

“Wampire came from a German foreign exchange student, who was always flipping his V’s and his W’s,” Tinder says. “We’re kinda stuck with it and wish we could get away from it.”

And while they can’t escape their name, the band soon realized they could escape the kind of music they were initially known for, a sort of fourth-generation reworking of the whole bedroom scene that swelled across the indie community in late 2009.

“When we started, we were the whole bedroom laptop-y thing,” Tinder says. “We started doing this epic, driving electronic punk. We’d make beats and played guitars and sang over them, and then making a backing track to bring to the live group. But with a full band, we started realizing we didn’t wanna be on that train. We started realizing we didn’t wanna be dudes hovering over a laptop.” 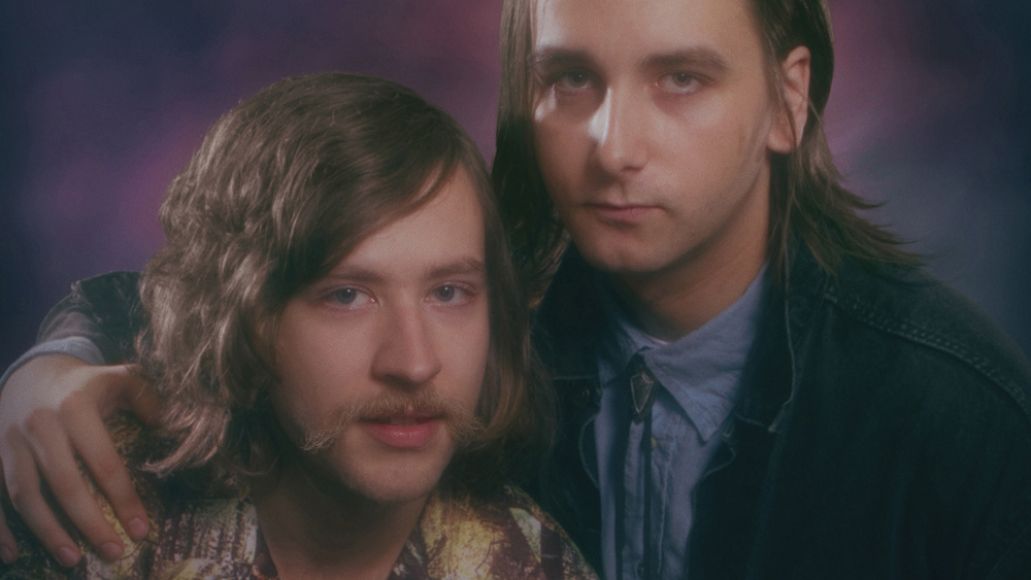 So, they made the logical conclusion of dropping almost entirely out of sight from early 2011 until the end of last year. A risky career move for any young band nowadays, where even the shortest time away can spell disaster for their future.

“A lot of it deals with, in late 2010 and 2011, I was tour managing for UMO,” Tinder continues. “We kinda hated where we were at. It was nice that we weren’t over-playing, to be able to get out of that routine of playing regularly. That only gets you so far, plus it taught us to say no to shows. It had been enough time where people would ask, ‘Are you guys even still a band?’ It felt very relieving. We get so obsessive over our process, ad we get completely burned out, which is another reason to start over.”

Tinder especially felt the weight of having to try to make it. Their whole vanishing act gave him some much-needed perspective about what he should be trying to do as a working musician.

“I think it’s easy to get so burned out after a while where nothing happens,” he admits. “Like, it was my whole world, and now I can hang out and do other stuff. I like that it (their recent surge in attention) happened now, because now we have a sound we’d actually listen to. The music is much more laid back. It also gave us time to pull away and pull songs from the setlist. Some of the older songs, like ‘Orchid’, made it on the LP. It works very well, but we did ditch a lot of it.”

When the pair returned to action, they happened to book a gig with STRFKR and their old pals UMO. It was at the hometown show that Portrait agreed to produce the LP. Wampire’s first step then was to embrace what they’d already built, even if it included more camp and jokes.

“Over time, we’ve become more confident with embracing it,” Tinder says of the band’s shtick and aesthetic. “‘The Hearse’ starts with that Dracula song, and we’re playing up more of that vampire thing.”

And while the song’s a hyperactive blast of ghoulish organs like Odd Rods trading cards come to life, the band had to accept the fact that putting it out may or may not have been a success. That’s a given for all acts, but Tinder and Phipps are very concerned with their perception, a battle they still struggle with today.

“There were times when we thought this isn’t gonna hook or it’s gonna go over people’s heads,” Tinder says of “The Hearse” and the gimmick. “A lot of it felt like we were taking a chance. But it feels gratifying that something caught and we’re doing so well in the blog world. Eric and I talked, and we thought it might have too much of a schtick. But it was a conscious and not so conscious decision. But Jake stressed, ‘don’t worry yet, just get in there and the album will have its own form.'”

If their battle with how they’d be perceived is a skirmish, then recording and working with Portrait was practically trench warfare. On paper, Tinder understands the need for the connection in the eyes of the fans, even if that’s something he didn’t want to admit when press first went out.

“At first I was like, ‘Can we try and not bring attention to it,’ but that’s the way people need it to be,” he says.  “You have this band you don’t know made by this guy you do know, but you gotta be careful with it. We hoped there’d be less of a focus on Jake being from UMO. But then again, it is our first record and maybe we should lean on it. We’re in a day and age where friends can help your work this out. Jake plays such a crucial role, that maybe it’s just something we have to be comfortable with. Because I couldn’t imagine doing this without him. We’ve gotta embrace it and run with it.”

Of course, the duo only got to that conclusion after enduring a rather emotional recording process. While Tinder is quick to add that they were “cracking jokes all the time, smoking weed, and eating pizza,” he also admits that it was quite a stressful time personally and creatively.

“I was definitely nagging at some points,” Tinder says. “I think he once called me the most difficult person to work with, and I felt like I was sitting there coming up with brilliant ideas. It was definitely an emotional roller coaster, and I had more than my share of complete shutdowns.” 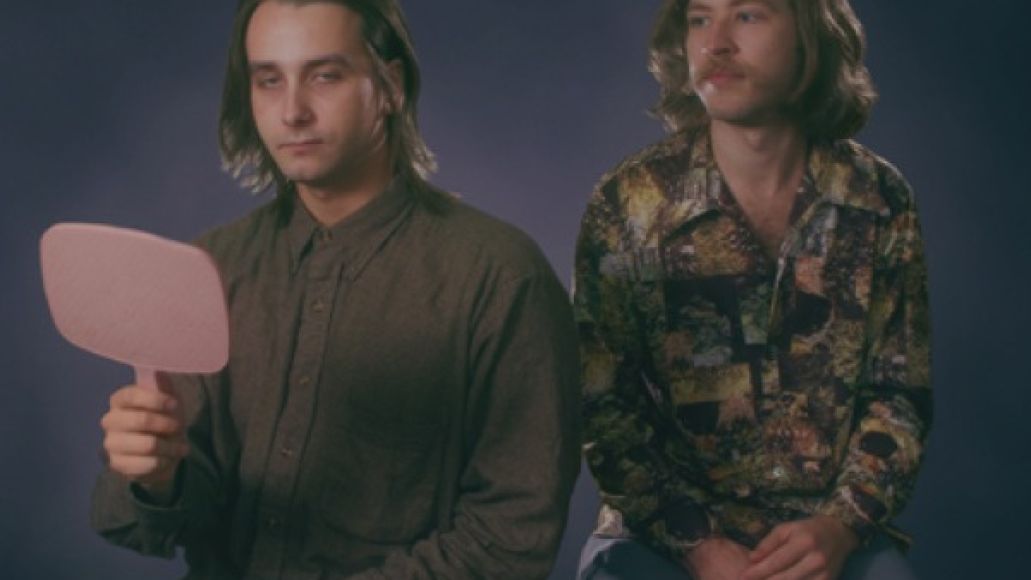 The issue, if there was one directly at the core, was Portrait’s concept of the band. Tinder and Phipps may have been rusty or still struggling with their identity, but Portrait knew exactly how to shape them physically and musically into something necessary. He just had to get there at the band’s own pace.

“Each of the songs has this warm treatment, they’re sort of a poll from something,” Tinder says. “With ‘Outta Money’, I brought a song that totally sounded like Girls and Smith Westerns. Jake was persistent in deconstructing it in this whole Adam Ant theme. We tracked all sorts of guitar and vocals. It settled nicely, had a nice John Maus feel to it. But I felt out of my range. It took me 100 times to sing it well. And Jake ended up taking the entire thing and replacing everything. But it was so much more interesting. Finally, I was like ‘Here’s the keys to the car, just drive.'”

Despite the turmoil, “Outta Money” works exceedingly well. Its oversized, atmospheric synths, and sad-sap guitar strum build an air of quiet desperation. But Tinder’s voice, full of reverb and an Elvis Presley-inspired air of hound dog sadness, really bring home the sentiment. The band’s essence shines through the quirky combination of synth-pop and arena rocker, making it their own no matter the architect.

Tinder is also quick to remind that it wasn’t entirely the Jake Portrait Show. What he did was focus and guide what was already there under the surface. It was as much a team effort as any LP, even if the captain was in charge most of the time.

“It was definitely a collaborative effort by the end. But when an idea took off and got pumping, and one got through, it felt like a win. Like, I felt I could do a better vocal take on ‘I Can’t See Why’. We’ve been playing it live for a while, and the performance was completely different, and the whole song was a wash. But I came back with a new idea, something different.”

“I Can’t See Why” is exactly that. Like “The Hearse”, it’s built around a balls-to-the-wall organ part, one that shines with a slightly horror-punk sheen. But rather than go full-on spooky, it’s perhaps the duo’s most punk offering on the nine-track LP, radiating a sense of reckless abandonment through every pop of the organ. It hearkens back to their early material while displaying a tangible sense of growth.

But in the end, it came down to the same concept as the whole vampire thing: being free enough and comfortable enough to let go. To know what you want musically and not be afraid to get there through skill, luck, and a little forceful guidance. To trust in something outside your own and let whatever may come hit hard — or as Tinder brilliantly summarizes: “If you’re gonna hire a wizard, don’t tell him to stop being a wizard.”

Still, the only reason that they were willing to give up so much is that, deep down, Tinder and Phipps are really decent people. The luck and joy they feel about being in their position radiates heavily when you talk to them. They may be rock stars who play the synth and write songs about undead blood suckers, but they’re also two very regular gents whose moral foundations have brought them to exactly where they are.

“I don’t wanna toot my own horn, but I am ego-less in my process,” Tinder says. “Pride is a sin, or whatever. I’m also the youngest off five boys, so I’m used to getting picked on and not being able to off-load. That teaches you some humility.”

So, until the album drops in May, they’ll keep practicing and playing, still remaining unsure of how they’ll be perceived and treated. But they’ve put in the kind of work that guarantees at least the most basic level of success, even if it’s just a little personal satisfaction and knowing what they really want out of their chosen life.

“We wanna be two funny dudes,” Tinder says. “We have no qualms with being cool as fuck, but we’re not gonna try to do it. We wanna be lighthearted and funny, playing shows, getting drunk with good people, and just hanging out.”