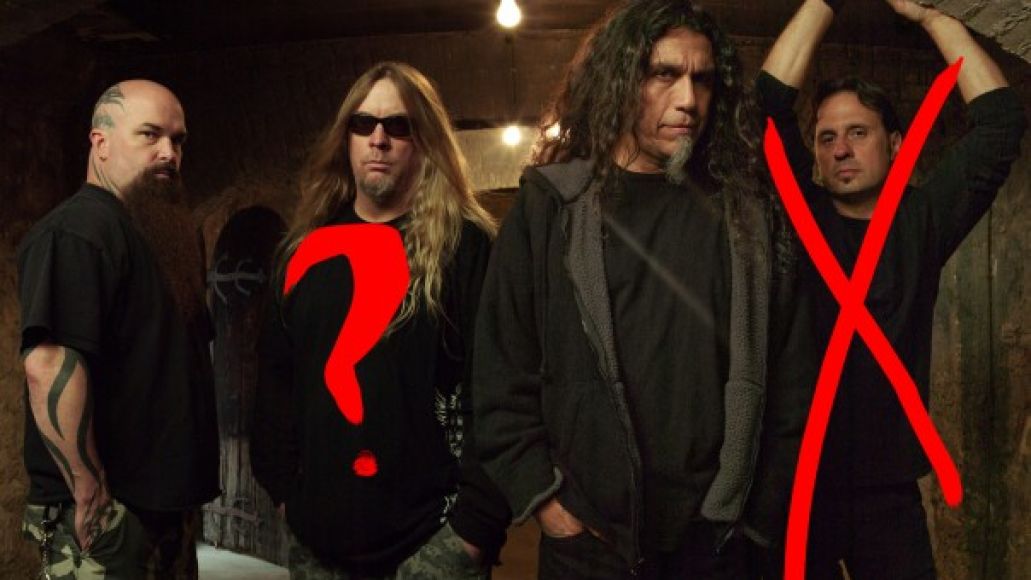 These days, thrash metal icons Slayer aren’t exactly melting faces at full capacity. Guitarist Jeff Hanneman is still recovering after contracting necrotizing fasciitis from a spider bite in early 2011. And now, drummer Dave Lombardo has announced that he’s been removed from the band’s upcoming Australian tour over a contract dispute (via Metal Injection).

In the lengthy note posted on Facebook, Lombardo explained his removal stemmed from a disagreement in the band’s finances. Specifically, Lombardo suggested adjusting how the group’s touring income was divided, indicating members currently split a mere 10% after various second party contractors have been paid. He claims this was his way to help recoup over a year’s worth of back wages and that he was met with demands for a long-term contract before discussions were to go further.

Lombardo also said he was prevented from releasing statements or conducting interviews about the band and was denied access to any of the band’s financial records for review purposes.

Adding insult to injury, Lombardo was only informed of the decision less than a week ago via an email from the band’s lawyers. King recently announced the band had written 11 songs for their new album, but it’s unclear if Lombardo’s absence will extend beyond the Australian leg.

Drummer Jon Dette, who has played with the band several times before, will replace Lombardo on the tour. It should be noted that this isn’t the first of Lombardo’s albeit-temporary departures, as he left to spend time with his pregnant wife in 1992 after helping to form the band back in 1981 with guitarist Kerry King. He re-joined the band in early 2002, playing on 2006’s Christ Illusion and 2009’s World Painted Blood.

Read Lombardo’s statement in full followed by the band’s entire tour schedule. As always, stay tuned for further developments as they emerge.

I want to personally apologize to all of our fans in Australia who have bought tickets for the tour expecting to see me in my usual place on the drums.

So that you all know the truth, as of the end of the business day on February 14th, I was notified that I would not be drumming for the tour in Australia. I’m saddened, and to be honest I am shocked by the situation.

Last year, I discovered 90% of Slayer’s tour income was being deducted as expenses including the professional fees paid to management, costing the band millions of dollars and leaving 10% or less to split amongst the four of us. In my opinion, this is not the way a band’s business should operate. I tried rectifying it by letting my band mates know, and Tom [Araya] and I hired auditors to figure out what happened, but I was denied access to detailed information and the necessary back up documents.

I spent the Christmas and New Year holidays realizing I had toured all over the world in 2012, but yet, had not been paid (except a small advance) or provided a proper accounting for a full year’s sweat and blood. On top of this, I was told that I would not be paid until I signed a long form contract which gave me no written assurance of how much or on what basis management would deduct commissions, nor did it provide me access to the financial budgets or records for review. It also forbade me to do interviews or make statements having to do with the band, in effect a gagging order.

Last Monday, I sat down with Kerry [King] and Tom to rehearse for Australia and to propose a new business model that I felt was the best way forward for Slayer to confidently protect itself so we could do what we do best . . . play for the fans. Kerry made it clear he wasn’t interested in making changes and said if I wanted to argue the point, he would find another drummer. On Thursday, I arrived at rehearsals at 1 pm as scheduled, but Kerry did not show. Rather, at 6:24 pm I received an email from the lawyers saying I was being replaced for the Australian dates.

I remain hopeful that we can resolve our issues. But once again, I sincerely apologize to all of our fans in Australia who spent their money expecting to see the 3 of us original Slayer members.

I look forward to seeing you in the future.