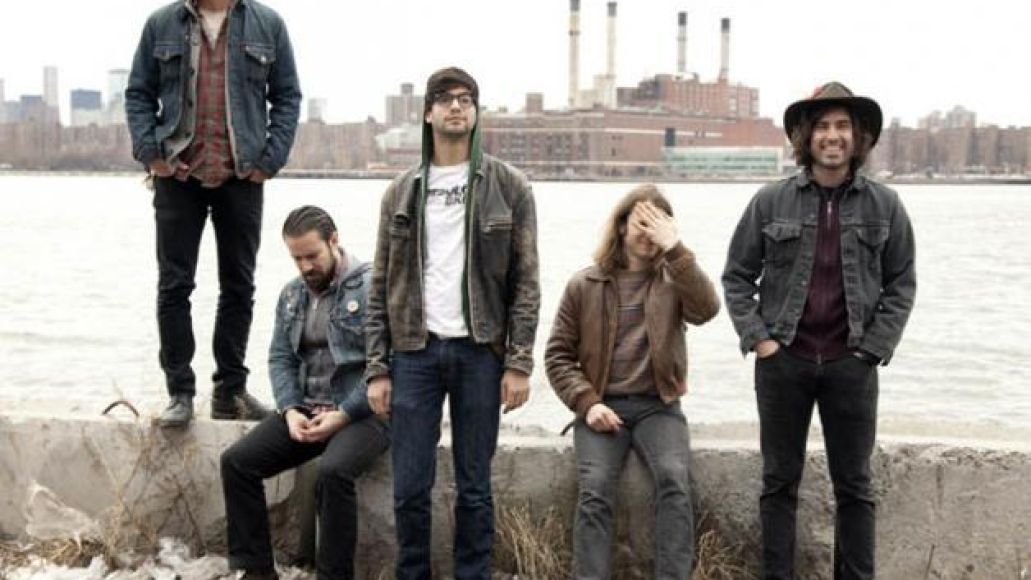 Suspicions rise when punk musicians announce plans to skip town and find themselves in the wilderness. Suspicions rise higher when their working album title replicates a popular Young Adult novel. So, after a two-week respite in the Catskill Mountains to record their fourth album, it’s safe to say that the critical cards were stacked against The Men’s New Moon.

But the Brooklyn-based post-punks prevail and prevail hard on their latest effort that sounds like the MC5 go on Exile. Sure, there were no hippie wives and love children basking at The Men’s communal vacation rental in Big Indian, New York (at least, none that they mentioned), but that’s why they were able to get down to business and record upwards of 19 songs in two weeks. The new material combines the melodic sensibility of 2012’s Open Your Heart with a return to their distortion-heavy roots of 2011’s Leave Home.

The Men divulged that the key to a fresh sound and a record a year is, to paraphrase a line from The 40-Year Old Virgin, to not put the process on a pedestal. The band sat down with Consequence of Sound in the East Village’s Black and White bar, where they talked stared down three o’clock whiskey glasses and discussed how New Moon came together in a lunar swirl of luck, improvisation, and one fortuitous night involving homemade mushroom tea.

I understand that you guys were inspired to record upstate by a 32-hour orbit. What exactly were you chasing there?

Ben Greenberg (BG): Well, the 32-hour orbit refers to the moon and our sleep schedule. When you don’t have any time limits on your process, everyone’s schedule tends to get a bit off from what it would normally be. So we wound up working kind of odd hours and staying up late. It’s nice to work whenever you feel like it.

Sounds a bit like summer camp from Wet Hot American Summer. What was there to do for fun up there?

BG: Ha, well there were no girls. For fun, you can light a fire, you can walk up the mountain, you can drive 25 minutes to the grocery store. There was an air rifle in the closet that I found on a subsequent trip that we didn’t even get to use. It was really fun. maybe next time.

My favorite song on New Moon is the last one, the eight-minute behemoth “Supermoon”. It’s the distinctive hardcore track on the album — different from the rest — and the guitar solo is just great.

Mark Perro (MP): “Supermoon” really began as just a riff. We just jammed on it for it a little bit and then recorded it in one take.

BG: That was also the night we made mushroom tea. Wasn’t really a big story. I had words that I was working on, or at least some words for that song. We recorded it after one or two times through, so the structure was there, but when the song idea gets out of your own head, it always becomes something very different. And with “Supermoon”, we just wanted to see where it went. We wanted it to sound loose and free.

MP: That’s also because we were tripping.

BG: And there was an actual super moon the night we recorded that song, so it was on our minds. It was really cool. We had recorded a bunch of acoustic stuff that night by the fire. Rich (Samis, drummer) spent all day on that fire, collecting sticks and whatnot.

The time you spent in the Catskills couples nicely with the natural themes going on, like on “The Seeds” and “Bird Song”, which is especially awesome. According to the press materials, New Moon is described as your most “intensely personal” record. I thought the album had a rustic approach, but I didn’t hear the personal, per se.

MP: The first thing you said about the concept is exactly right. We wanted to keep it loose and organic. Open Your Heart has a lot of layers and overdubs, a lot of different stuff going on, but with this, we just wanted to keep it very minimal and as live as possible. Most of the songs were recorded in one or two takes. The vocals are live, there are overdubs, but nothing in comparison to some of the other stuff we’ve done. As far as the personal part, I don’t know. I didn’t say that. If anything, it’s personal because it’s stripped down, a little more naked than our other records.

Were you conscious of using the moon as a motif? The album repeats things that are associated with the phases of the moon, like faces and disappearances. For example, “Without A Face”. Who is the man that you mention in those lyrics?

BG: No, we didn’t intentionally use the moon like that. That’s cool how that happened though. The line in the song is about when I was in the 6th grade and first discovering the internet. I came across rotten.com and there was a picture of a man who fell off his motorcycle and didn’t have a face anymore. I think about it everyday. Scary shit. The world’s a scary place. That’s what the song is about. That’s the most specific strand of it. Otherwise, it’s really a song about perseverance. You can’t let life freak you out so much that you shut down.

It may be a non sequitur to talk about musicianship in a punk band, but how has it changed for you? The range of musical styles you’ve used so far indicates something significant is going on there.

BG: Interesting. I mean, I think I’ve always played the music I want to play. I think we’re better at accurately doing a song and doing it the way we want to do it. The other night, we played a song that we’d never performed before and we played it once, unplugged, backstage, and then it just worked. I don’t think we’ve done that before. I don’t think we were ever able to do that before. It’s sick being in a situation where we can just do what comes to mind.

BG: Sacred Bones, our label, is also incredibly supportive. We told them that we wanted to go upstate and do this thing and record there, and they were down. Caleb, the owner, even came up to the house. We barbequed and played him all the stuff we were working on. It was great.

My friend has a Sacred Bones tattoo and I think every record you guys put out makes him not regret that decision. You guys have any regrets?

MP: Tattoos and these guys? Definitely. Every single one [laughs].

Rich Samis (RS): I got a tattoo of Jesus with Mouseketeer ears on his head.

MP: Don’t think I’ve ever seen that one…

When you tour and are cramped in a van together, when is the breaking point? Day 30?

BG: Breaking point is Day 21, so we try to keep it shorter than that all the time [laughs]. You just try to stay sane, be respectful. It’s hard to keep in touch with people when you’re gone for long, but I guess it’s all relative.

Kevin Faulkner : Yeah it’s totally hit or miss. We played on a boat in Lyon, a strip club in London, in a parking lot in the middle of Italy. Oh man, it was so fucking cold that day. Another time, we rolled up to this place somewhere in Europe and it was so small. For an hour it was just us and the sound guy who either didn’t speak English or hated us. The food smelled like throw up.

BG: In Europe, they usually just have us play at midnight. It’s slow torture. But I guess there’s a lot of down time no matter where you are on tour.

New Moon sounds mighty polished for nailing most of the songs in one or two takes. How do you know when you have it? Is it a matter of simply moving on before someone second-guesses?

MP: Speaking of moving on, we’re almost done with our next record after this one. So, in our minds, it’s weird to talk about New Moon just coming out. Over the last few months, we were writing and started working on a bunch of songs, and it seems like there’s an album in there. I’d say it’s 95% done. And as far as finishing an album, I don’t know. Just feels right. You can just tell. I don’t know. We bring in what we think of and keep everything as simple as possible all the time.

It seems like no one else does that, but a good song doesn’t need to be over-thought. Things that work work, and there’s no point in agonizing over some shit, and do 67 takes. That’s usually a sign something’s not right anyway. We’re always going after new sound, but I mean, this is what we do. There is nothing we do other than make music. If we’re home for four months, something is gonna come out of that.