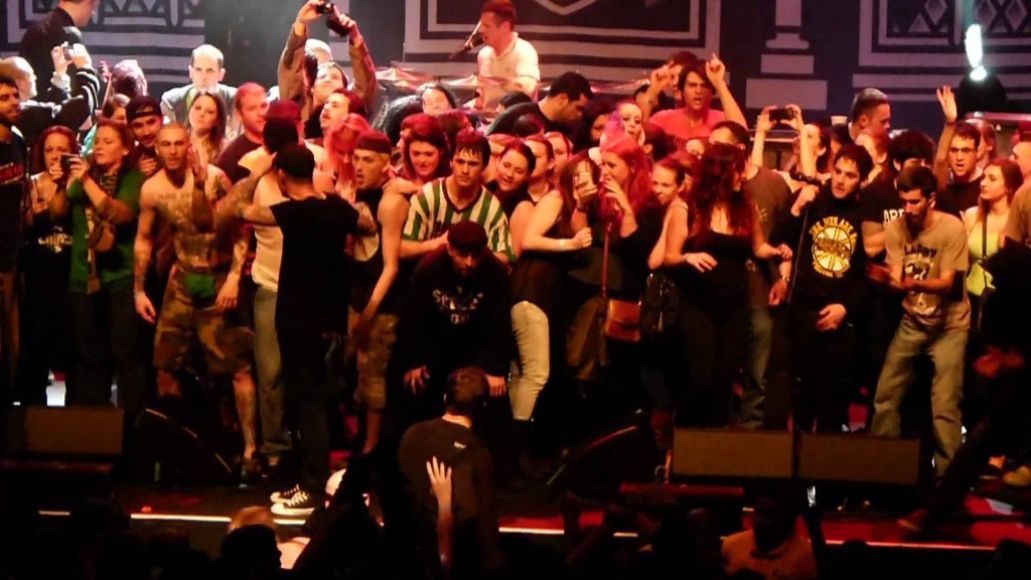 Dropkick Murphys have long battled incorrect interpretations of their song “Skinhead on the MBTA”. The “skinhead” referenced is of the Boston hardcore scene circa the 1980s. In fact, many of these skinheads came to form the group Skinheads Against Racial Prejudice after being labeled as neo-Nazis. So to be clear, Dropkick Murphys are not Nazis and their song “Skinhead on the MBTA” is not about Nazis, neo-Nazis, or any other fringe group of racists.

So you could probably understand the band’s frustration when an actual living, breathing neo-Nazi — or some guy who gets a kick out of doing the Nazi salute — showed up at their concert in New York City last week.

It was St Patty’s Day week, the shows were packed, and people were getting drunk. And Rowdy. Really Rowdy. As has become tradition the band invited the ladies to come onto the stage for their encore of “Kiss Me Im Shitfaced” 50+ ladies made it past the barricade and onto the stage and danced the song away. The band then kicked into “Skinhead on the MBTA” and a ton of dudes werre getting past security and the stage ended up being packed tighter than the underside of a real man’s kilt. As the band kicked into T.N.T. by AC/DC some moron started seig heiling (the nazi salute) in time to the beat.

Ken Casey noticed this and ran right over to the guy, smashed him in the face, took off his bass and hit him with that and then jumped on him and all out chaos ensued. We could only assume from our vantage point that said nazi got his ass kicked. About 30 seconds later Ken emerged from the pileup with his shirt torn and made his way back to the front of the stage. He strapped on his bass and said into the microphone “Nazis are NOT FUCKING WELCOME at a Dropkick Murphys show.”

Below, you can watch two videos of the beat down. And don’t forget: Dropkick will spend most of the summer on the road, so unless you want to get your ass kicked, leave the swastikas at home.

Watch Dropkick Murphys beat up a Nazi on stage