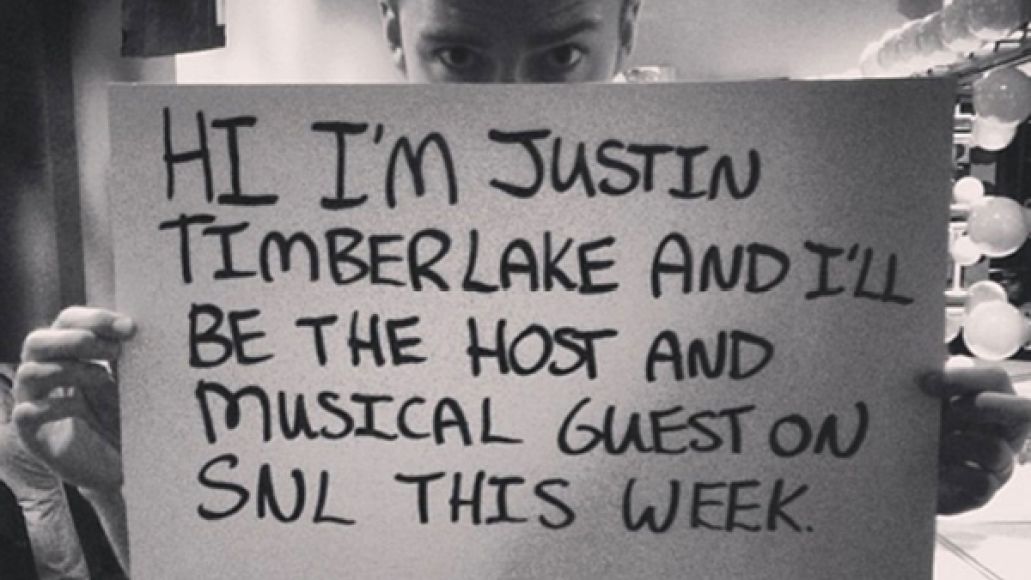 Justin Timberlake put his many talents on display last night, serving as both the host and musical guest on Saturday Night Live. In fact, it was his fifth time as host and SNL recognized the latest member of its prestige Five-Timers Club right off the bat with an all-star sketch featuring many fellow members, specifically Steve Martin, Tom Hanks, Alec Baldwin, and Paul Simon, along with former SNL cast members Martin Short, Dan Aykroyd, Chevy Chase. It was pretty wild.

Next, Timberlake reunited with Dick in a Box cohort Andy Samberg, with both appearing as contestants in a spoof dating show, which also featured the reunion of another iconic duo: Martin and Aykroyd’s The Festrunk Brothers (AKA “Two Wild and Crazy Guys!”)

Timberlake also reprised his “Bring it down to…” character,  this time hitting the street dressed as tofu and singing parody versions of Rihanna’s “We Found Love and Trinidad Jame$’s “All Gold Everything”. And just because, the sketch closed with Timberlake and the cast doing their own version of the “Harlem Shake”.

From tofu to tuxedo, Timberlake quickly changed into his suit and tie for his first performance of the evening, singing a dazzling rendition of his new album’s lead single. There was a full band, dancers, and Jay-Z — yes, Brooklyn’s finest joined his future tour partner to spit his part of the song. There was also a quick jab at Kanye West (!), with Timberlake briefly reworking the song’s second verse from “Sh*t so sick got a hit and picked up a habit” to “My hits so sick got rappers acting dramatic”.

Timberlake also performed his new single, “Mirrors”, albeit shorter than the eight minute version set to appear on The 20/20 Experience.

Other sketches found Timberlake spoof Elton John, singing “Candle in the Wind” at Hugo Chavez’s funeral; as a “sober Caligula”; and as an unruly court officer with a fondness for alligators.

Replay both performances below, along with select sketches (via Mediaite).

Dick in a Box vs. Two Wild and Crazy Guys!

Bring it down to Veganville