Karen O is at the end of her rope. “Free yourself. That leash is long, long, long,” the Yeah Yeah Yeahs singer chants on “Buried Alive”, a late-album surprise on the band’s fourth studio LP, Mosquito. It’s a statement that implies she’s been given so much slack on the line it’s easy to forget she’s tethered at all. Repeating the line in a moment of delicacy, it becomes her mantra, a placid reminder that the 13-year-old band she fronts can never rest on its laurels. There’s always another shackle to break in this hypercritical musical climate, even if she’s her biggest critic. She refuses to phone it in, for the sake of her independence. So the YYYs give a cameo on “Buried Alive” to storied Bronx rapper Kool Keith. If you say so, Karen.

If the goal for the New York-based art-rockers is to outpace the pack, their constant experimentation might be enough to deem Mosquito a success. It picks up where 2009’s new-wave infused It’s Blitz! left off, expanding the dance-floor thump of that album to include more experimental synth and electronic percussion, swinging from the dark swells of post-punk to the clackety garage rock that marked the trio—Karen O, drummer Brian Chase, and guitarist Nick Zinner—as favorites of the early aughts Brooklyn loft scene. We’ve come to expect the unexpected with the Yeah Yeah Yeahs. That pits Zinner’s brash-yet-painterly guitar tones against sky-high, ambient keys and an expanded African-tinged percussion palette that’s largely been untouched by the band.

As a result, the signature martial-jazz thump of Chase’s kit is remarkably absent from a few tracks. Instead, he leans toward the sequenced, where the mark of producer Dave Sitek (of TV on the Radio) is felt strongest. The driving clave beat of “Always” unfolds into sub-808 bass hits and echoed handclaps, amongst glittering synth runs. It’s easily the album’s most effortlessly sublime moment. Chase, and the rest of the band, sounds most at home on lead single “Sacrilege”, a binary tale that not only makes distinction of the sacred and profane but turns the former into the latter, sexualizing a fallen angel figure who lands in bed. Karen O lets the Broadway Inspirational Voices gospel choir provide the ironic ballast for the track, taking the censure from the entire congregation. It sets the outsider-insider tone of Mosquito with a chill.

The album’s title track wants to be a tribal romper, breaking open with a flurry of hand drums before bridging the minimal bass line to a classic Chase stomper. Karen treats us to hisses and howls usually reserved for her notoriously wild stage persona. The ravenous mosquito she inhabits nods to the supernatural tone of the album, where she encounters a seraphim, extraterrestrials, and other monsters. On “Wedding Song”, the album’s last track, Karen finds herself amongst angels, fulfilling the sentimental need for YYYs fans and giving her the chance yet again to bare her heart. A muted electronic bass pulse cedes to a tom pattern from Chase while Karen more or less credits love as the reason to breathe, historically and personally. Conversely, “Area 52” roots itself deep in the fundamental Yeah Yeah Yeahs sound, a guitar-driven punk-tinged broiler that has Karen willingly taking off from earth as a specimen on a UFO, declaring, “I want to be an alien.” She’s reaching out, breaking new barriers, both emotional and terrestrial.

The songs on Mosquito unfold like a note from your high school crush. They’re clandestine, dressed up on the outside, and, at times, innocuous even at their most meaningful. What’s more, the payoffs don’t always resonate with the pineal, which should be the one thing worth counting on from the band — that skill has, for some time, been their hallmark. Four albums later, the Brooklyn outfit has run so far from the proverbial leash that they’ve forgotten what home might be — and really, true freedom seems frivolous without any restraint. 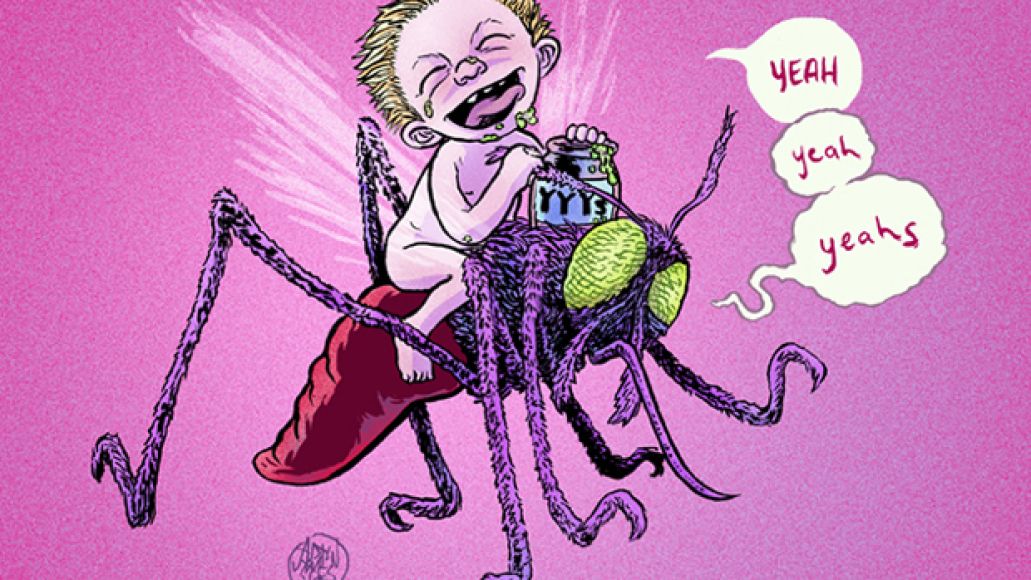