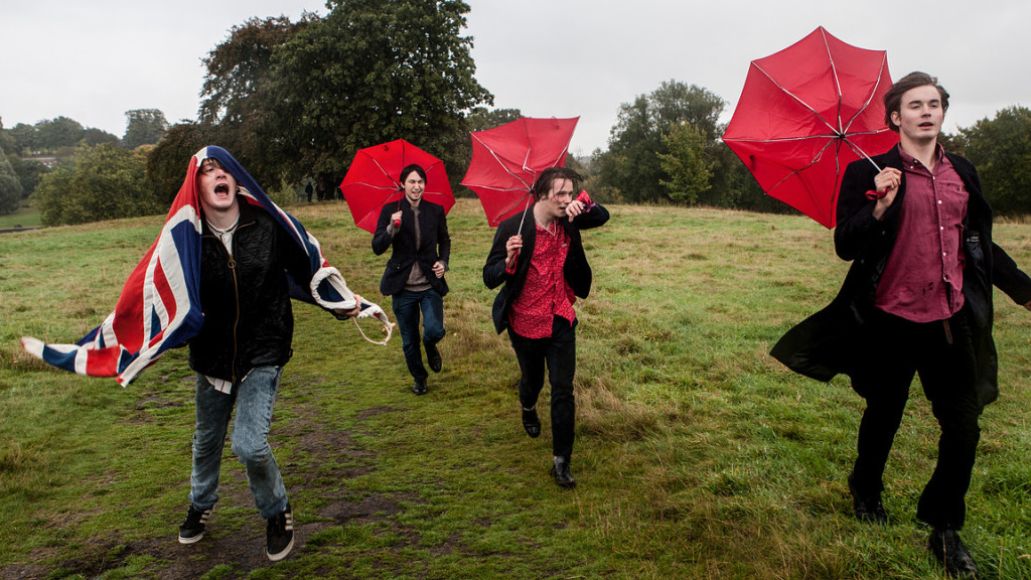 Like any meaningful relationship or a really good taco stand, music with true, long-lasting value has a tendency to hit you when least expected.

Let me take you back to this year’s South by Southwest. It’s Friday, March 15th, the day before I was set to head home after a week of late nights, greasy BBQ, cheap beer, and enough live music to fulfill a life quota. But on the midnight of the last night, I tagged along with a few colleagues to see London’s Palma Violets. The set was ballsy, crude, and arguably life-threatening. Not since I met my now-fiancee randomly over sushi have I experienced an event that left me as dumbfounded, grasping at words and concepts only to be left with, “Well, things will never quite be the same, will they?”

Assembled sometime in 2011, Palma Violets (bassist/vocalist Alexander “Chilli” Jesson, guitarist/vocalist Sam Fryer, keyboardist Peter Mayhew, and drummer Will Doyle) don’t so much play on stage as they conquer it like 6th century barbarians. My colleague Michael Roffman did an amazing job of contextualizing their havoc. Still, no write-up could ever fully encapsulate the band’s visceral live display.

Their live show is this massive wall of noise that beats you down and tears at your bones; but at the same time, it’s whipping you around and drawing you into this massive circle of people. Here, you’re as much alone in the wilderness of fuzz as you are now besties with your fellow moshers. And the whole time, the band is manipulating every moment and emotion as they slowly lose themselves to baser instincts, note-by-note devolving into hard rocking predators with a taste for chaos.

“Live shows have always been where we’re at our best,” Mayhew says in a recent phone interview. “We can get very lost in the moment. In fact, we don’t really believe in those bands that can’t play their live shows.”

That encapsulates the band quite well: they know what they like, they do it with every bit of strength in their collective soul, and yet they don’t make too big a deal about it. Call it a sort of planned anarchy, an understanding of their skills and strengths and letting those develop as they may in this wacky industry. At its core, the band are just a bunch of young dudes, specifically the over-the-top Jesson and Fryer, who organized the outfit and whose relationship is the band’s driving core.

“The dynamic between Sam and Chili adds an extreme liveliness, lots of youth and excitement,” Mayhew says. “It’s sort of like those youthful man relationships, with two teenagers exploring the world together. Our live show definitely reflects that aspect.”

Also at their creative core is a deliberate sense of ignorance regarding their recorded output. One listen to their debut record 180 (out now via Rough Trade), and that boundless energy from the live show sounds diminished, reduced to levels safer for consumption by a wider audience.

The white-hot keys of “Johnny Bagga Donuts” cools down, allowing the song to rely on more on guitars and drums, which makes it sound slightly more generic; the energy levels of “Rattlesnake Highway” don’t hit quite the same levels, and the slightly muddy sound is harder to dance through; and though the eight-plus-minute groove of “14” becomes more nuanced on tape, it has to do without the life-affirming on-stage meltdown. 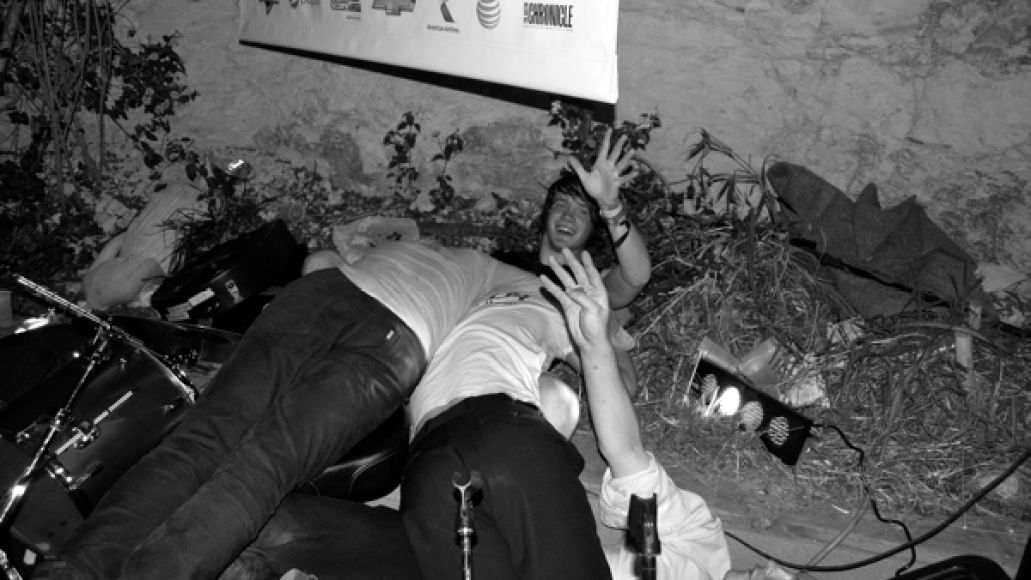 “There’s been plenty of bands that debut and the album sounds absolutely amazing,” Mayhew explains. “But then their live show is so underwhelming. We didn’t want the live show to sound like the album. There’s loads of scrappy albums, ones that are all over the place and rough around the edge. But then there’s nothing different between that and the live show. You’ve got to leave room to be able to grow.”

But not too much room to grow. After all, any sort of planning beyond that could be construed as some sort of maturity, and then that’s where this whole rock and roll thing might become an actual job. The animal metaphor extends beyond how they react to crowds; they behave with little thought, only to move forward and consume as much as possible.

“We never really thought about recording the album and then how to do the live show,” Mayhew says. “We never thought, ‘Well, that’s what we would become.’ We just kept going and do whatever we want, just very much going along with it.”

It should be noted, though, that their was some semblance of control and authority during the album sessions. Producer/Pulp bassist Steve Mackey resided over the recording process, and though his specific aesthetic isn’t abundantly clear, he did offer the band something they may not have necessarily needed: permission.

“Steve handled about 40% of the album,” Mayhew admits. “He had a way of just letting us go and do it our way. He made it all possible, all happen without giving us a lot of attitude about it.” 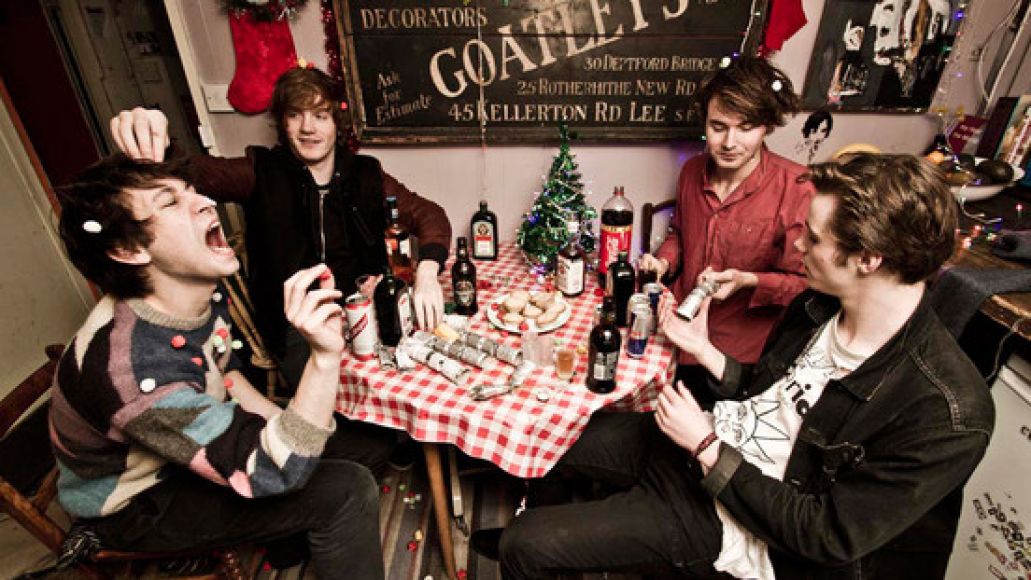 Along with anyone’s gruff, the band doesn’t have time for fretting over aesthetics. Nowadays, everyone has lots to say and discuss about an assortment of band’s careers, and Palma Violets just don’t have time for any of that.

“When we started making music, we didn’t have a sound in mind,” Mayhew says. “I think nobody really knows what they’re doing, and then the public and the labels start making comparisons. But all people do are making comparisons, nothing else.”

They’re not snobs, though; if anything, Palma Violets are the result of pure and visceral reaction. Lots of acts talk about their process and their inspiration, and the band doesn’t understand why there’s such a need for all this chatter. Maybe it stems from the fact that they’re just not old enough for such a conversation (half the band are under the legal U.S. drinking age). More than likely, it’s the common denominator of the group: a completely unmethodical, free-flowing approach to their career. They’re young sharks cruising the rock and roll ocean, lunging at what swims by and hoping that their run lasts as long as it can, but prepared when all this attention and fame might slip away.

“There’s lots of bullocks in the music industry, and everyone seems to worry,” Mayhew says. “People should enjoy it at the time. That’s what music should be about: playing and hanging out. I think it makes the whole experience more special and timeless. Something people can look back at and say, ‘Can’t really do that again.’ Some bands need a very clear [idea] of who they are and what they’re doing. But the thing is, we’re all young people here and you’ve captured your best the only way you can.”

They’re especially enjoying it in the good old US of A. When the foursome started, they were playing and recording in Studio 180 (hence the album title), a dive-y little joint they called their home, studio, practice space, and locale for every kickass party. It’s the genesis for their entire musical approach: homegrown and dirty, they do it all on their own, with the barriers between band and crowd, gig and home purposefully blurry.

But now they’re making more and more strides stateside, and while some bands have a hard time leaving home, Palma Violets are loving American crowds, and the feeling is mutual. If you’re smart, you’ll stumble in when they hit your local club (or basement).

“People in the U.S. have been quite nice actually,” Mayhew says. “We’re a guitarist band, so not that many people don’t like that. But they’ve been very nice to us, and everyone’s been on the same level. In America, people kinda do what they want and don’t want much rules. They just want you to put on a good live show and then just see what happens.”