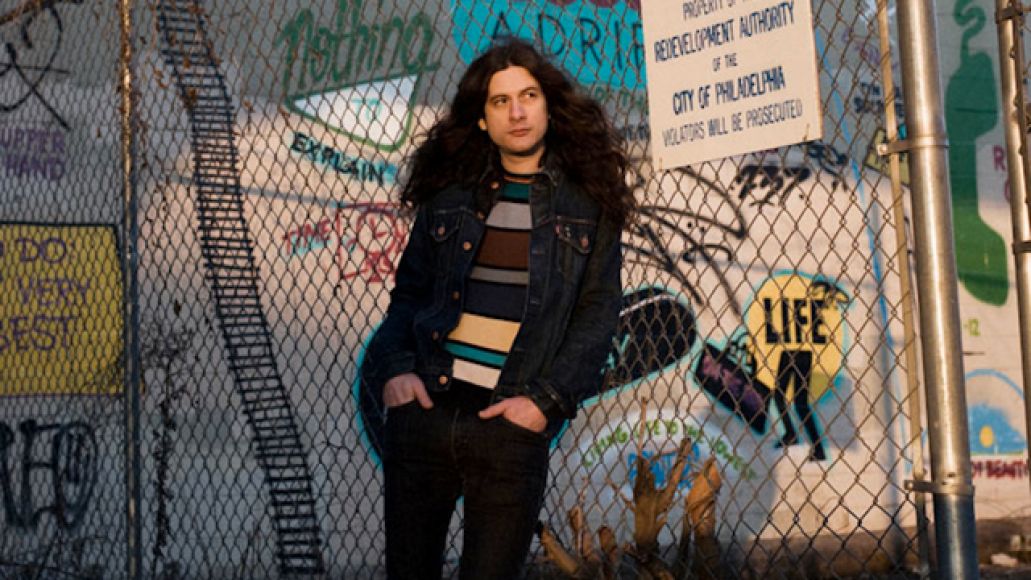 You have to try pretty hard to not fall in love with Kurt Vile’s music — humorous, self-deprecating, and honest all at once. Vile’s languid folk, singed with Americana and true blue rock n’ roll, entrances with every listen and only continues to tighten your heart with time. From his stint with Philadelphia’s The War on Drugs to his already-prolific solo career, Vile (not a moniker) consistently produces some of the most captivating guitar-driven melodies in modern rock music today.

We caught up with Vile on the cusp of his second release on Matador, Wakin on a Pretty Daze, and chatted about his growing guitar collection, demented party music, and black humor-driven lyricism.

I saw your video for “Never Run Away” today featuring your daughter donning different animal masks while the record spun. That was great.

Yeah, that turned out funny. I was really paranoid and was secretly drinking wine at the time because it was so awkward [laughs].

Awkward? It looked completely natural. She seemed to be enjoying the song, too. What do you listen to with your kids?

Well, my daughter has a similar taste to me. One of her favorite records is one of my favorite records from when I was a kid, this Rusty & Doug Kershaw one. It’s Cajun rock n’ roll, called Louisiana Man. She’s got different songs she likes. One of her first favorite songs was that Neil Young song, “See the Girl Dance”, which Crazy Horse covers. There’s a bootleg of Neil Young playing it live, she loves that.

Getting her started early on the good stuff! Has having kids made you conscious of certain creative habits you have, or has it caused you to shift them in any way?

I’ve been playing music for so long, and there were a lot of artistic inner battles I noticed. Having music on my mind for so long, and trying to accomplish things. I still have that, but I don’t know. I don’t get stressed when I’m not playing music. There’s so many different mindsets — like touring, and I go up to New York a lot to record, and that’s where my band is. I go from being totally focused on my music to coming home and seeing my family, and it’s inspiring.

I got this new guitar — I haven’t been playing at home lately, but I knew I would start soon. It’s my job to have my guitar in front of me. It’s really natural to play at home now. It’s like breathing. But anyway, I got this new guitar that I needed to play both acoustic and electric guitar on. My wife likes it when I hang out and play guitar. She wishes I would do it more. 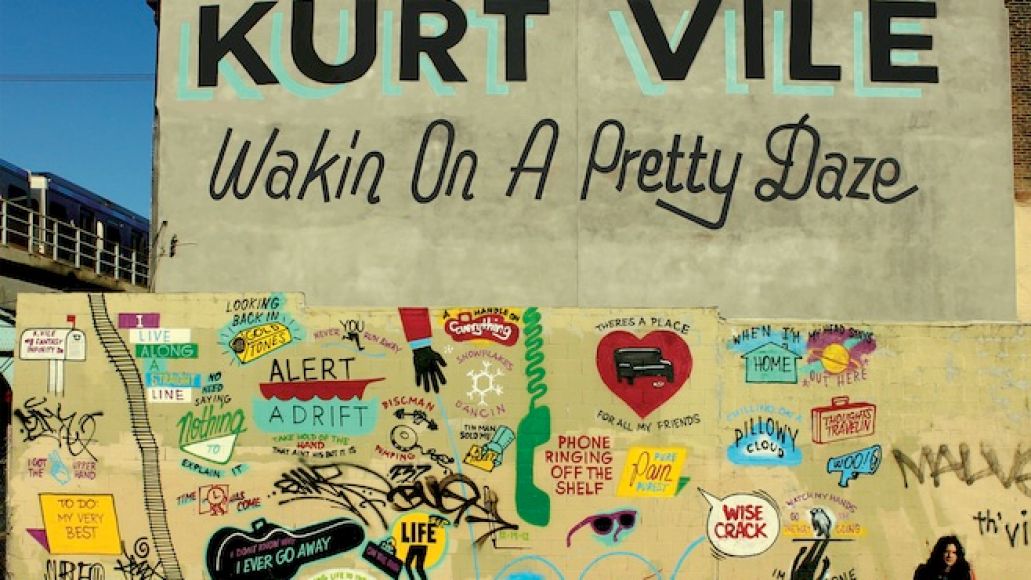 What kind of guitar did you just get?

It’s a 1961 Guild Starfire Hollow Body guitar. It’s awesome. Ray Davies played one of them. I got it off one of the main drags in New York. I play a lot of acoustic songs, but also a lot of ones on electric. I always felt like I was stuck playing either acoustic or electric live, and it didn’t sound quite right. I could probably play my whole set with this new guitar, though. I bought it literally yesterday. I’m accumulating a lot of guitars now. I have two more acoustics and a Fender ’64 Jaguar, but it’s very specific. I just got this Fender Mustang, too. I do an electric version of “Ghost Town” on it.

Which one of these is the guitar mounted on the wall over you in the “Never Run Away” video?

That’s actually just an old 12-string that my friend from high school, John Newman, gave me. I wrote about him in “Song for John in D”. He gave me that a long time ago. It’s cheap but good-looking. The only time I ever used that in a recording was in the song “Overnite Religion”.

What’s the last record you bought?

Randy Newman’s first record. I think it’s got, like, some lawn chairs on it. I got a couple of really good used John Prine records. I got it on a press tour. There’s just three heartbreakers in a row on that album. “It’s Happening to You” especially. Mid-period John Prine is all the heartbreakers, but fiddling a little more.

What section do you usually beeline to at the record store?

I was on the search for a new Happy Mondays album when I was in New York. On the road, I don’t go as much, because it adds up, but when I’m at home, I get a lot of vinyl. I like to get CDs on the road because they sound way better than MP3s. I have this portable little box. Ideally I have something in mind, a plan. I joke that my two favorite bands are like party music, so Happy Mondays or Steely Dan [laughs]. The combination is really weird, but it’s not that different to a record nerd. It’s demented party music.

What is the last thing you listened to that floored you?

Hmm. Stuff floors me all the time. I made this mixtape that Matador’s going to release, sort of as inspiration for their album when I was going up to the studio. One song that floored me beyond belief, and somehow I missed, is “Are ‘Friends’ Electric?” by Gary Numan. I heard it in a club setting in Amsterdam. It’s seven minutes of the best synth melody. It’s out there and conceptual.

Especially in that type of setting.

That’s what my guitarist Rob said. I ran into him, and he said, “Yeah, it’s Gary Numan dude.” I had never heard it in that setting. Amsterdam, too.

Let’s talk about Wakin on a Pretty Daze. It departs from Smoke Ring for My Halo thematically, and it’s bolder. What changed that prompted this shift?

Basically, we were on tour a lot and infusing rock with the folk. Which I do, but we were doing more of it. Smoke Ring captured an interesting time where I had to grow as an artist, but I was still pretty new to that label. The other I made on my own, which Matador picked up. I had my first child in the middle of making that record, too. [There are] a bunch of unique reasons why that album sounds like that. It is a stripped-down record. It’s weird.

But it’s by no means, even though it blew me up… it’s not my total personality. Just one side. It was experimenting more, lots of traveling, getting better at guitar, and bringing back my synthesizers into it. A lot of it was having Rob, my newest main member of the band. He’s a synthesizer and engineer whiz, a really good musician and brainiac. Jesse’s brilliant at pedals in a different way. Everyone kind of helped. It was the first time I worked on a record as a band full-time. Granted, I was the one doing most of the stuff, and we had a lot of friends play, but the process was a lot deeper.

It seems like your creative process is very meticulous. I read that there was much more material you had in your arsenal that appears on the new album.

At the very end… it’s when it gets very meticulous. But it was nonstop playing, jamming, laying something on top of something else. It’s about being soulful and getting the magic down. That’s a process. The routing and logistics of it all was meticulous in itself. We recorded in a lot of different places.

Why “Never Run Away” as the single with the video?

I think because it’s hopeful and has a lot of good hooks. I think we should make videos for a lot of the songs, though. They’re fun. I wish we made 45s with the B-sides, though. Singles like for “Never Run Away” with a lot of different stuff than what’s on the record. I want to do this 12” of B-sides, too.

As for the lyrics of “Shame Chamber”, it’s very dynamic, especially with the yelps. What were you thinking about when you wrote that song?

Over the years, I’ve developed this style of writing about black humor, just like satirical things. Everyone thinks that sometimes I’m shameful or whatever because of the lyrics. I mean, “just another day in the shame chamber” just has a nice rhyme to it. “Living life to the lowest power.” It’s all simple. I was laughing like crazy writing it. It’s the whole “smoke ring for my halo” thing, too. It’s a halo of smoke. [Laughs.] It’s just being human.