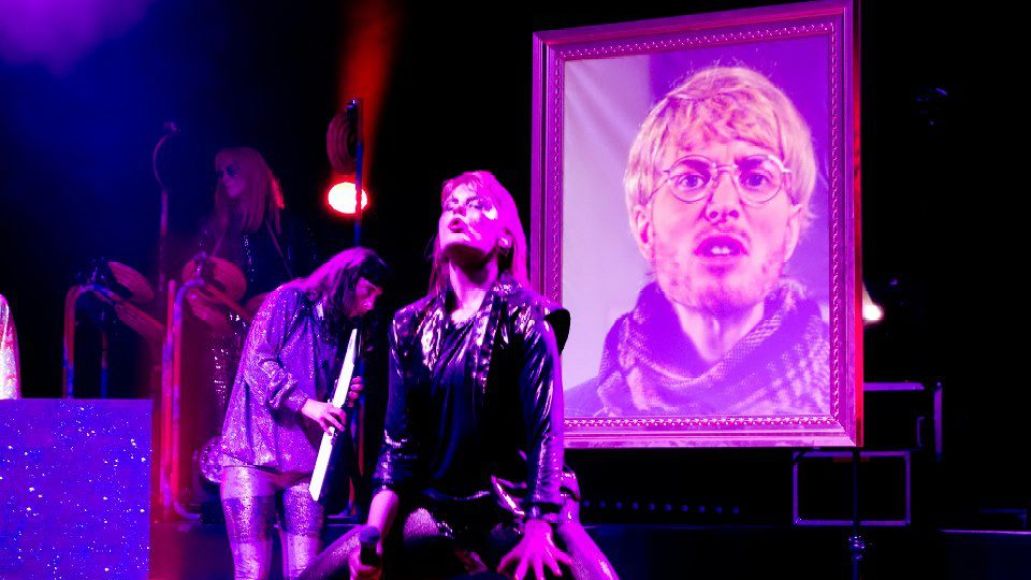 The Knife returned to the stage for the first time in seven years in Bremen, Germany on Friday night. The band performed material off their new album, Shaking The Habitual, and based on the photo you see above (via The Knife Fans), the video you see below, and a pair of fan reviews, it seems as if Karin Dreijer Andersson and Olof Dreijer are as adventurous as ever.

Here’s what one concert attendee wrote on Last.fm:

So i saw the starting concert in bremen and…it was awful. Practically a group dancing and ‘singing’ almost completely playback (correct me if i’m wrong), everything was awful. The costumes, the dancing, the acting (at some point one girl ‘played’ a stringed instrument completely upside down, shortening the string for lower sounds). From the warmup animator to the sudden disappearance: i had a highly unpleasant feeling during the whole show. But not because it was awful. Because i had the feeling that it was absolutely intended to be. With the videos from old concerts and a fever ray concert back in 2009, i know that the Dreijer’s are very sensible for atmosphere, mood and style. And they are skilled, having an eye for details.

It began with the animator cheering for energie, party and good feelings – mentioning along the way, that we should imagine taking an overdose and die. Songs seem to be intentionally ‘destroyed’, by the group leaving the stage or not moving at all (or moving very cheesy). They seem to perfectly omit every accentuation, every chance to create atmosphere. It was as if they tried to underline that everything was playback. Just real sloppy dancing. And with Karin’s & Olof’s occasionally smiles and grins it felt like a big, virtuous delivered “fuck you!”. To the crowd, just loving it. To the hype. To the guy behind me saying “that will be something we only experience once per lifetime”. A fuck you to me for not allowing, that the show was only awful. Maybe it was. Maybe it was the most misanthropic, challenging and artful show i wish i would have never seen.

Another fan left with a much more positive experience:

Personally i loved the show. I definately was NOT a “concert”, but mostly a “representation” on stage, but that’s what was advertised

In the fan footage below, you can get a sense — albeit a shaky one — of their concert in Hamburg on Saturday night. It captures the band’s performance of “A Tooth For An Eye”, and there’s definitely a lot of dancing involved.

Update: Check out many more photos from the concert here.

The Knife next “perform” in Milan, Italy tomorrow night. Their current tour is bookend by several festival appearances, including Belgium’s Pukkelpop, Ireland’s Electric Picnic, and the UK’s Bestival. Still no North American tour dates though.

Thanks to the Coachella message board for aggregating a lot of the above info.

The Knife's Shaking the Habitual tour is "misanthropic, challenging and artful"