Random Access Memories has been echoing in the metallic domes of Thomas Bangalter and Guy-Manuel de Homem-Christo for half a decade. The sheer number of collaborations on RAM, including noted movie composers Paul Williams and Giorgio Moroder, finds Daft Punk building upon their new-flesh narrative, adding to their storied, cinematic mythos of the diminishing boundary between computers and people. What sort of film is this? Bangalter has shared that the group is “[D]rawing a parallel between the brain and the hard drive – the random way that memories are stored.” This tale of robots yearning to live like men is a motif soldered throughout the group’s multimedia career. But with Random Access Memories, the robots have found their souls. All it took was razing the digital foundations that brought the group to fame in the first place.

Within seconds, the record stands out as a more homogenized and sleek listening experience than its predecessor, 2005’s scattershot Human After All. Yet it’s also marked by a playful whimsy that falls short of measuring up to the variety that pulsed through 2001’s Discovery, or the groundbreaking dance exploration found within their fabled 1997 debut, Homework. Instead, Daft Punk cuts ties with itself on RAM by exploring the past through some of the best and boldest collaborative efforts in recent memory.

It’s a rolodex of celebrated artists, both contemporary and preceding, who have inspired Bangalter and Homem-Christo to make music that revisits ’70s discotheques and ’80s funkadelic boat parties. Opener “Give Life Back to Music” features a grinning Nile Rogers and Paul Jackson Jr. throwing down a jazzy fusion of guitar licks over an upbeat, funky processional that could serve as an album summary or even a warning: “Abandon hope of an EDM record all ye who enter here.”

“Giorgio by Moroder” is framed around iconic Italian producer, songwriter, and composer Giorgio Moroder, who shares an autobiographical monologue that starts in the ’60s and works its way to today. Granted, it’s an honorable soliloquy from a Dance Music Hall of Fame inductee, but the spartanism of a spoken word segment – especially one that sounds like Werner Herzog waxing poetic over the Drive soundtrack — three tracks deep into the album is a roadblock and diminished return upon subsequent replays that could be better positioned at the very start or end of the record. It doesn’t help that it’s followed by the album’s weakest moment: the bloated dirge of a piano ballad, “Within”.

It’s not until Julian Casablancas’ inclusion on “Instant Crush” that the album centers back on course. The Strokes frontman previously demonstrated an interest in dance music with his 2009 solo effort, Phrazes for the Young, and judging from this track, one can only hope he lingers around the genre. Casablancas fires off in rapid succession “Now I thought about what I want to say / But I never really know where to go / So I chained myself to a friend / Cause I don’t know what else to do.” The most fascinating thing about the track is how it stands apart from the more traditional vocoding techniques of today. Here, Casablancas manages to come across as an artificial lifeform grasping toward human sentiments, rather than the other way around. It’s a confirmation of his own talents, as well as Daft Punk’s disciplined production and attention to detail.

“Doin’ It Right” is another dreamy partnership that plants Noah Lennox, a.k.a. Panda Bear, in the driver’s seat. While most of RAM is an amalgamation of collaborative styles, like two white-hot stars sharing energy across each other’s distinct orbits, the gravity of Lennox’s hymnal, Brian Wilson-inspired croon hijacks the song and makes “Doin’ It Right” feel more like a Lennox solo output. It’s intriguing to see the French duo relinquish so much control in the interest of venturing even further out past the buoys of a comfort zone. The fact that Animal Collective and Daft Punk would one day cross paths is also a remarkable curiosity for anyone who paid attention during the early days of MP3 swaps and file-sharing.

But the standout collaborator on Random Access Memories is, without a doubt, N.E.R.D. frontman and Neptunes producer Pharrell Williams, whose coltish funkiness and frisky hooks rain gold upon album highlights “Lose Yourself to Dance” and “Get Lucky”. The former is a siren song that beckons bemused listeners off the streets and into New York’s long disposed Club 54. Once inside, “Get Lucky” captivates with its sophisticated instrumentation and Williams’ bad boy confessions: “She’s up all night ‘til the sun/I’m up all night to get some/She’s up all night for good fun/I’m up all night to get lucky.” A radio edit of “Get Lucky” has been spinning for weeks and will continue on rotation as it’s already one of this year’s strongest singles and an early contender for this summer’s anthem.

Random Access Memories proves that Daft Punk remain masters of their domain, who defend their array of superlatives because of, rather than in spite of, unconventional sound choices. The strings, the drum kits, and yes, even the clarinets, were not expected from the electronic duo, but somehow it all works. In 1968, Stanley Kubrick’s 2001: A Space Odyssey taught that man became who he is by mastering his tools, not by being a slave to them. Perhaps too, robots can only pretend to be human for so long before parting from their synthetic origins and embracing the tangible.

Essential Tracks: “Get Lucky”, “Instant Crush”, “Doin’ It Right”, and “Give Life Back to Music” 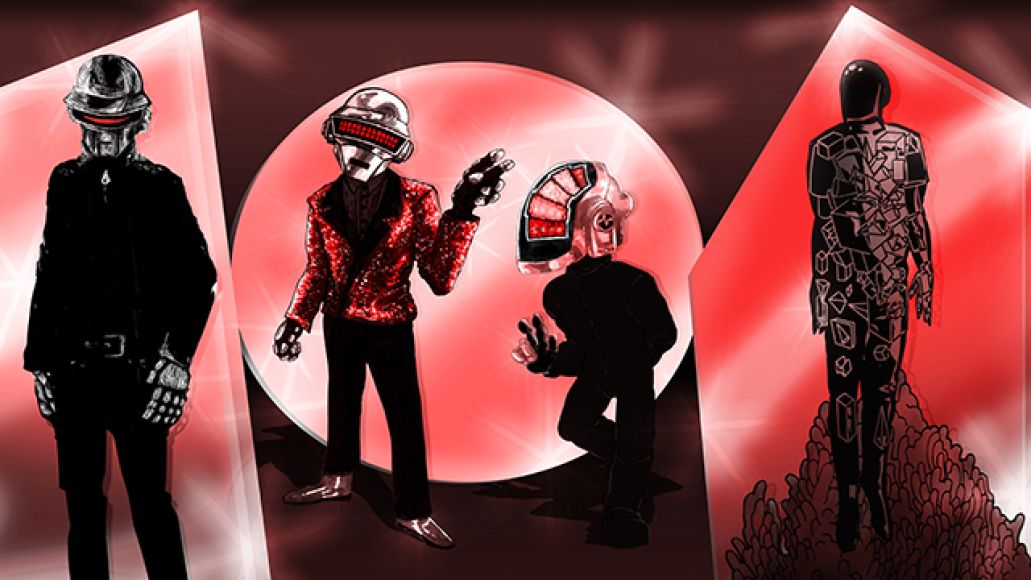