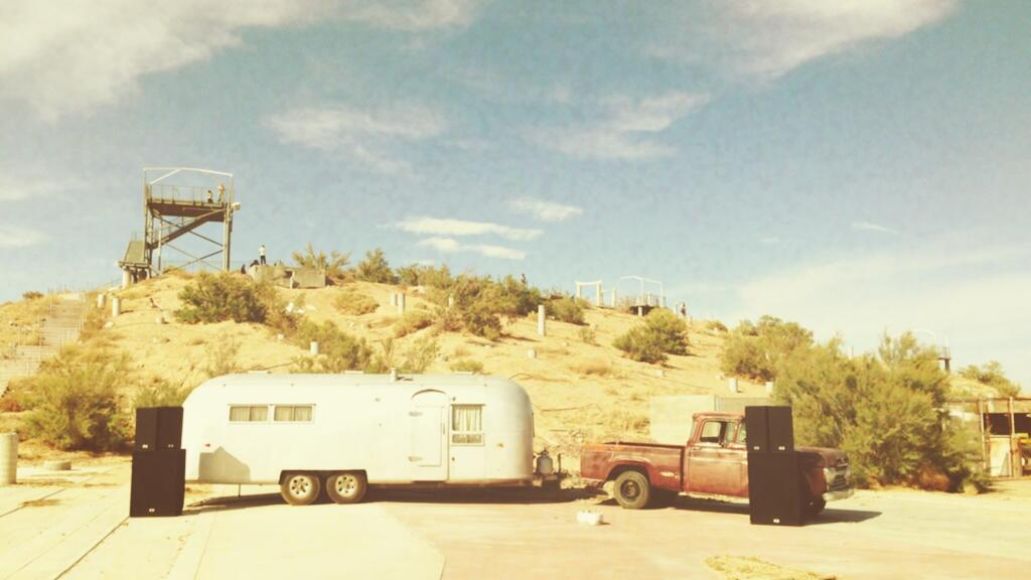 Nothing about the publicity campaign behind Boards of Canada’s new album Tomorrow’s Harvest has been by the book. The album was announced following a massive Internet-wide scavenger hunt involving secret vinyl and source code. The album’s first single, “Reach For The Dead”, was premiered via a giant video board in downtown Tokyo. Another track, “Cold Earth”, received its worldwide debut 6,418 miles away in Detroit during this weekend’s Movement Festival.

So, of course, the album’s listening party is being held in the middle of a California desert. Yesterday, the band tweeted the coordinates to a location in Yermo, California for something that would be taking place Monday at 5:00pm local time. According to several people who’ve arrived on the scene and posted on Reddit and the band’s message board Twoism, Tomorrow’s Harvest is being played in full from a pair of speakers set up next to a trailer (photo above). Over 60 people have reportedly gathered for the event, and have been told by event organizers that they can record up to the first three songs.

One fan is streaming the event live on UStream, which you can watch below (if the video doesn’t play automatically, try watching it directly through UStream). Also check out a Vine video from the scene.

Update: Watch the first 12 minutes of the listening party below.