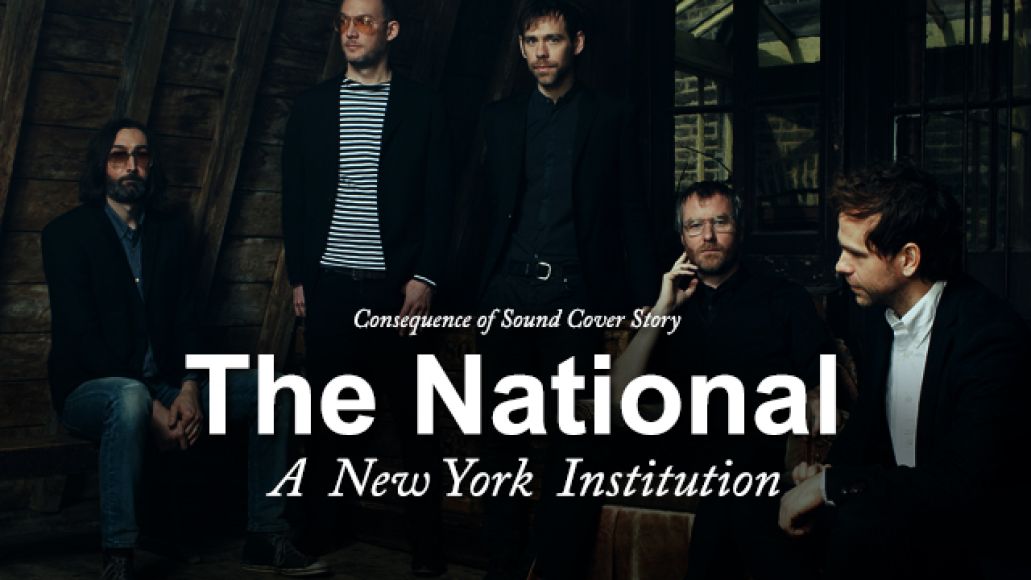 “The city for me has always been this Oz, this weird, slightly out-of-reach world,” Matt Berninger, 42, says from the backseat of a Town Car. His gaze shifts to the rain-speckled rear window as the driver merges onto the FDR. It’s half past noon. “When I first moved here, Scott [Devendorf] and I and like three other people from our school shared a studio apartment where we all slept in sleeping bags on the floor on East 60th, right underneath the Queensboro Bridge. I was just walking around the first week and I looked down the street, and I saw that bench and that lamppost from Woody Allen’s Manhattan. All of a sudden there was that movie poster.”

Behind his trendy new crystal frames are a pair of eyes that yearn for a pillow — if only his schedule permitted. It’s press time for The National frontman, who’s out supporting the band’s sixth studio album, Trouble Will Find Me. Thirty-five minutes ago, he and his bandmates finished their first AMA on Reddit upstairs at Aaron Dessner’s Brooklyn home. Thirteen hours prior to that, they closed a promotional 20-song set at the industrial Park Avenue Armory. Two days before, they performed High Violet’s “Sorrow” for six hours straight as part of Icelandic artist Ragnar Kjartansson’s installment, A Lot of Sorrow, at the MoMA PS1. Now, he’s taking a breather backseat, ruffled and drenched from the outside storm, as we’re racing uptown for a spot on Q-CBC Radio. In the distance, the Manhattan Bridge looms in the fog.

“New York was almost always that way,” Berninger continues. “Even when I look at it now, I’m in a Scorcese movie. I don’t feel natural here. I feel a suspension of reality. I think that’s what’s so amazing about this city; it’s a muse, and it’s a fantasy place. It’s just such a romantic, strange city that’s always a part of the songs.”

A brush through The National’s discography walks you down endless streets that wind through Chelsea, Bowery, Flatbush, Sutton Place, Bayside. Berninger’s written a number of his melancholy anthems around the five boroughs, whether it’s the regretful pains within “Daughters of the Soho Riots”,  or “waiting for Radio City to sink” on “Little Faith”, or feeling the haunting paternal struggles of “Val Jester”, or losing identity “So Far Around the Bend”. These are New York songs. 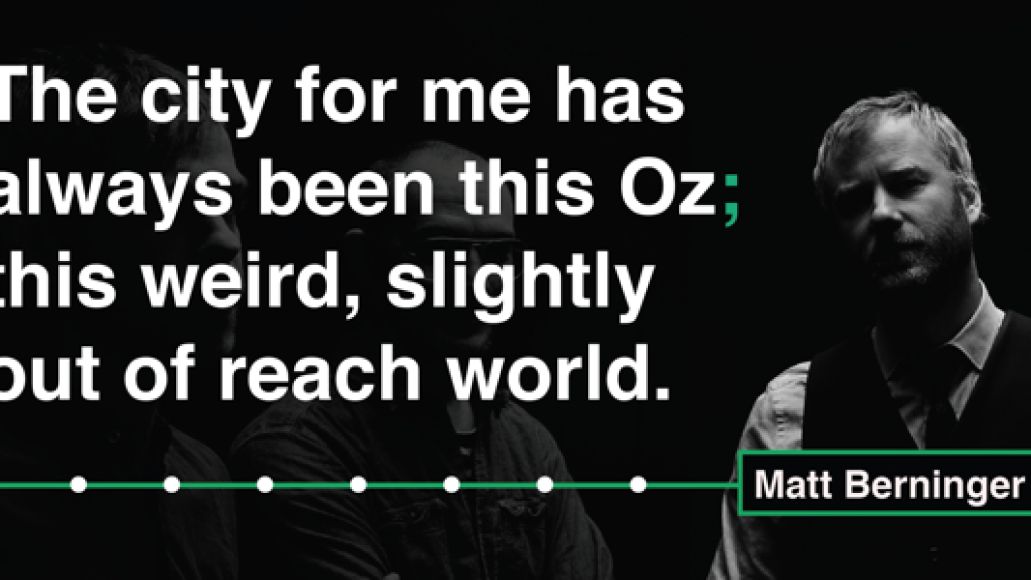 Berninger has lived in Brooklyn for 17 years. In 1996, he left his hometown of Cincinnati, OH, alongside bassist Scott Devendorf, who he met while attending the University of Cincinnati, and the two pursued similar careers in graphic design to much success.

“None of us came here to be in a band necessarily,” Berninger admits. “We’re just drawn to New York the way people are. I think we’re very representative of so many people of this city because so many weren’t born and raised here.” The father of a four-year-old daughter, Isla, and husband to former fiction editor for The New Yorker, Carin Besser, Berninger has created a life for himself in the Empire City, yet he doesn’t consider it home.

Aaron Dessner, 37, is on the phone ordering carryout and insists I taste the chicken fiesta wrap. He’s just finished his interview with Q-CBC Radio, and both he and Matt are itching for food. It’s a little after two, the Upper East Side echoes with sirens, the sidewalks are stained with rain, and the heat is rising from the streets. Aaron needs to find a cab, Matt needs to find a cab, and we all need to retreat to Brooklyn.

“I moved [from Cincinnati] to New York in 1994 because I went to Columbia,” Dessner tells me once we’ve found a proper backseat. The heat’s slightly distracting, leaving us to fumble with the passenger windows. The way the sun reflects on the guitarist’s hair makes him look like a young, pre-Corvette Summer Mark Hamill.

“In 1999, The National formed and we made a record over the next two years, but it wasn’t an ambitious beginning.”

If anyone knows “ambitious,” it’s Dessner. Both he and his twin brother, Bryce Dessner, who also plays guitar, have kept their resumes prolific with an assortment of outfits, collaborations, projects, and benefits. They’re co-founders of Brassland Records, curators of the annual Crossing Brooklyn Ferry festival, and have performed alongside several world renowned orchestras, including the Copenhagen Philharmonic, the Amsterdam Sinfonietta, and the American Composers Orchestra. 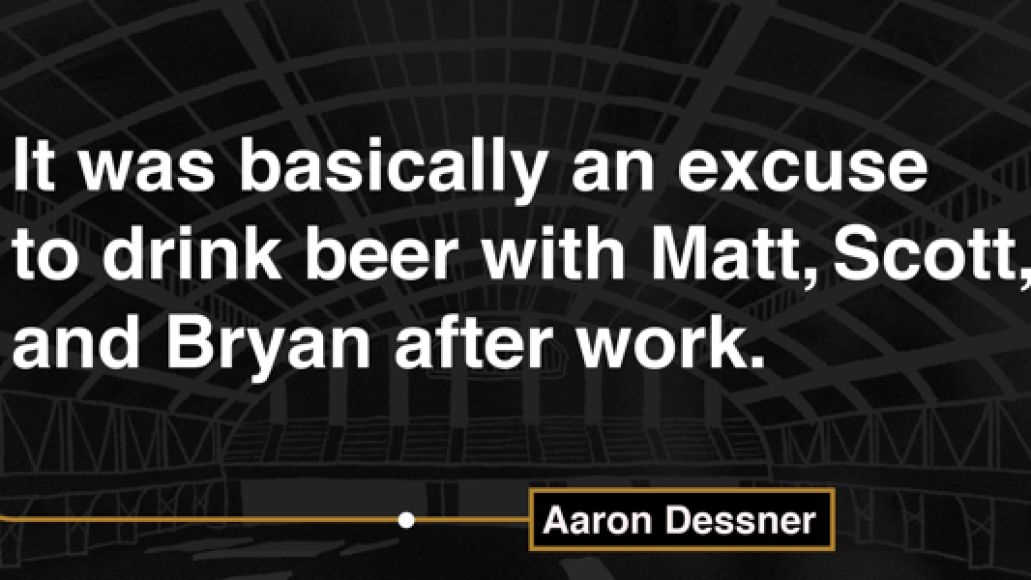 In 2009, the two spearheaded the Dark Was the Night benefit compilation, which has since raised millions of dollars toward AIDS charities. They’ve also supported artists onstage such as David Byrne, Arcade Fire, Feist, Grizzly Bear, Justin Vernon, and My Brightest Diamond. More recently, however, Aaron has become a popular producer, manning critically acclaimed albums for Sharon Van Etten (2012’s Tramp) and Local Natives (this year’s Hummingbird).

“It was casual,” Dessner continues without batting an eye, “It was basically an excuse to drink beer with Matt, Scott, and Bryan [Devendorf] after work. We had a friend who had an 8-track, and I would just pick up a guitar and play a few chords. Matt would record and just sing over it. And then Bryan would drum to it, and we would make that a song.” He pauses, then adds: “It wasn’t like we got to New York and said here’s the master plan. It’s happened over a long period of time.”

This was The National’s humble beginning: just a spark. Throughout my discussions, each member notes that their first two records — 2001’s The National and 2003’s Sad Songs for Dirty Lovers — were more or less an experimental phase for the outfit.

As Devendorf, 40, tells me on the phone weeks beforehand: “We just spent a lot of time working, recording, and touring just because it was something that was fun to do. Touring actually became a gentlemen’s vacation club — let’s go somewhere and get paid — where we booked everything out to some degree of successes and failures.” He insists that once The National were invited overseas, specifically in France, it changed everyone’s outlooks on what this band could be.

They still had miles to go. Long before “Mr. November” stormed concert halls and festivals, critics slotted 2007’s Boxer on their year-end lists, and President Obama adopted “Fake Empire” for his 2008 Vote for a Change campaign, The National played their anthems to no one, hardly living up to their moniker.

“One time we got paid not to play in Orange County — literally no one came,” Berninger says earlier in our ride together. “There was not a single person there, drinking or doing anything. The bartender said, ‘I’ll still pay you, and we can all go home early.'” He shakes his head, smiling, lost in thought before adding: “We did a show in Akron where the only person there was Patrick Carney from The Black Keys; we were both very unknown bands at the time. He stood about three feet in front of me the whole show.” 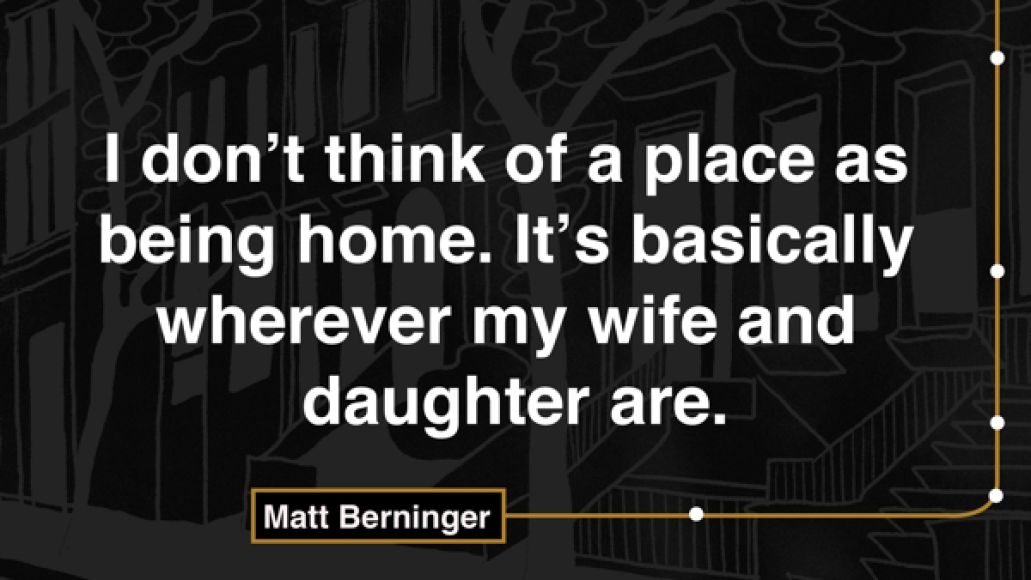 It was a different age: a time when the digital tastemakers hadn’t yet found the spotlight, as they would in the mid-to-late aughts. “We were never a band that basically ‘arrived’ as many do today,” says Devendorf. “Some bands come seemingly out of nowhere with a ‘hot single’ on the Internet, which is something that we didn’t do, nor did we have the technology to do so.”

A decade later, Berninger now considers these times the growing pains of being in a rock band, a job he considers “more humiliating in some ways than it’s glorifying,” concluding: “I’ve always felt performing to be cathartic, like swimming in freezing ice water can make you feel alive, but it’s also a large dose of feeling uncomfortable and feeling like a fool and feeling silly.”

As the afternoon ages, the sun wrenches through the clouds, and with it more heat. It’s still bumpy on the FDR, and Dessner’s head bobbles as the abandoned Domino Sugar Factory can be seen across the East River. We don’t talk much about the earlier records, but Dessner points to their 2004 Cherry Tree EP as the moment where “the alchemy of The National really started to appear.” He adds, “We made a rule around then that we wouldn’t write a song to something that we weren’t really confident about musically.”

This is why they’re still around.

The National: A New York Institution