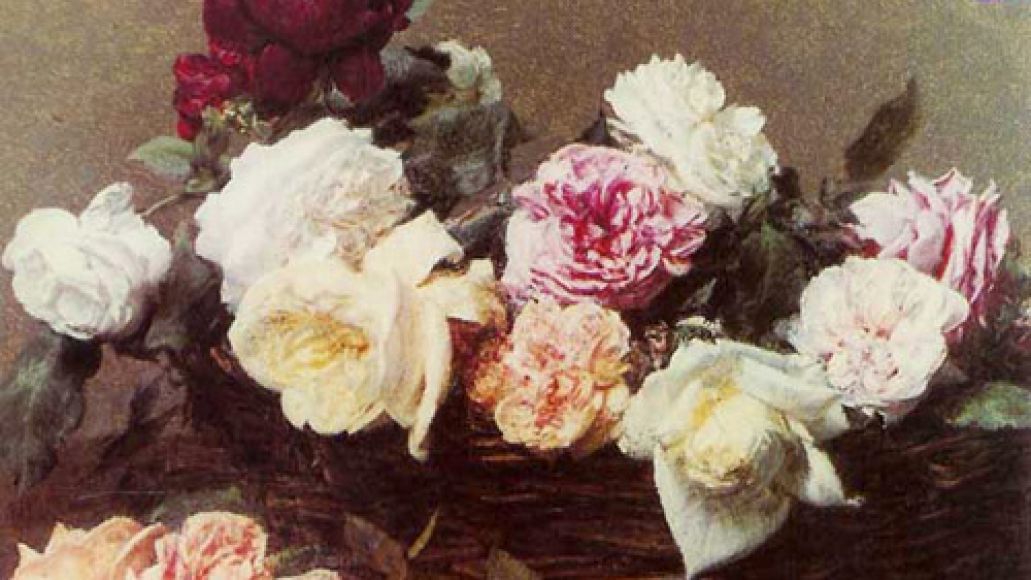 In this week’s edition of Dusting ‘Em Off, Editor-in-Chief Michael Roffman and Senior Staff Writer Justin Gerber look back on 30 years of New Order’s critically-acclaimed sophomore album, Power, Corruption & Lies. The two discuss its ensuing legacy, the confusion behind the outfit’s singles, and the impact of former bassist Peter Hook.

Justin Gerber: Any time I bring up Power, Corruption & Lies, people usually respond one of two ways: “Is that the one with ‘Blue Monday’?” or “Is that the one with ‘Temptation’?” After breaking the bad news, I try to explain what it does have the classic “Age of Consent”. Unfortunately, people get that mixed up with “Ceremony”, which leads to, “I love Radiohead’s cover!”

But I digress. Power is essential to New Order’s career because it was the true moment they finally broke away from Joy Division. The aforementioned “Ceremony” single is incredible both musically and lyrically, but the latter is due to the late Ian Curtis. Even their debut, Movement, bears a closer resemblance to the band they were than the band they were trying to be.

Plenty of bands have tried to duplicate Joy Division over the decades to varying success and failures, but New Order would have been considered an exploitative knock-off if they continued down the dark and troubled road they were on before Curtis’ suicide.

Michael Roffman: I’ve always been sort of 50/50 on Power. “Age of Consent” sets the bar really high, and it’s a level they don’t reach again until the emotional closing track, “Leave Me Alone” — which, oddly enough, sounds like a sequel to “Ceremony”. Focus on its emotional guitar line and Stephen Morris’ percussion. The only difference is that Bernard Sumner sounds like he’s just been punched in the knee — which, let’s be honest, makes sense. It was a depressing time.

I think a part of me has always been really partial to Movement. It’s more or less the “lost” third Joy Division album, but it’s more stripped down and far less glossy than what New Order would find success with later on. (Honest admission: I’ve never, ever liked “Blue Monday” and it might be one of my least favorite ’80s tracks.) What I’ve found confusing about Power is that it sounds and feels like a band in transition, a lead up to their juggernaut single “Blue Monday” — a stairway even. For example, how do you go from “We All Stand” to the “Temptation” prequel that is “The Village”?

I’m working all this in my head as I’m discussing this, but what I guess I’m saying is that I preferred when they sounded more like Joy Division. Then again, I’m the depressive who soaks into Closer on a monthly (sometimes weekly basis).

JG: Mike, I see where you’re coming from in terms of quality and how it relates to Movement vs. Power. Hell, I’m sure we could find some common ground on the argument that New Order works better as a “singles” band as opposed to an “album” band. However, the point I was trying to make is that if the band had made Movement II featuring “Ceremony II: Back into Ceremonies”, they would have been doomed. The best decision New Order made during the recording of Power was becoming even more of a synth/keyboard-driven band, much to the chagrin of those who worship at the feet of Ian Curtis, yes, but they helped set the tone for music that is still being replicated today (M83, for one). Sidenote: How would “Ceremony II: Back into Ceremonies” sound? Peter Hook bass lead in, or an extended note held by Gillian Gilbert?

MR: If Hook was still involved, I don’t think we’d have any other choice, really. Already I can hear the long minute-and-a-half bass intro, maybe some bickering in the background, who knows. Sorry if I came off as a tad stubborn about the band’s sound earlier. Although Joy Division happens to be a personal favorite of mine, I understand that New Order could never be the same beast; instead, they became something arguably bigger, and as you stated, their influence is paramount.

Influence aside, I, too, have always looked at New Order as a singles band. Given that their first hits were all singles and not really tied to any album, I think that’s an apt description, and one the band might even contend with — though, based on prior interviews, I believe Sumner and Morris have a personal affinity to this album, and also Technique.

Before I go on, I’d like to redact my comments about Power‘s emotional bar. There’s no discrediting “Your Silent Face”, which might be one of their catalogue’s most elegant tunes. The way Sumner says “Everybody makes mistakes” twice before personally admitting his own folly is just great and, in hindsight, acts as a good summation of his self-deprecating lyricism that’s never felt disingenuous. Plus, I’ll never forget its use in Nicolas Winding Refn’s Bronson.

Having said that, I want to continue being the brat and complain about how so many of these songs feel like rough blueprints for bigger productions. I mentioned “The Village” sounding like “Temptation”, and “Leave Me Alone” feeling like a sequel to “Ceremony”, but I’d even toss “5 8 6” into the mix as an early preview of “Blue Monday”. You hearing this?

JG: “5 8 6” was probably recorded around the same time as “Blue Monday”, right? They were both released in ’83, but Power was actually released a couple months after the “Blue Monday” single. Either way, one is a rip-off…ahem…take-off of the other. As for “5 8 6”, I don’t know who came up with that strange stutter-step percussion that Morris is doing in the beginning, or Gilbert’s synth stabs for that matter, but both totally work. New Order could go dark when they wanted to. “5 8 6” and “We All Stand” both proved that; the latter with its “at the end of the road” on repeat through most of the track. Sumner must have been summoning Curtis during that song’s infancy.

“The Village” works nicely sandwiched in between “We All Stand” and “5 8 6”, and I can hear some of it in “Temptation”, like you said. It’s the band at their most fey and twee and another breakaway from their past, but holy shit is “Temptation” the better song or what? My personal belief that “Temptation” is one of the all-time greatest songs probably makes that an unfair comparison, but it is what it is. We’ve managed to go this far without going into detail about how important Hook is/was to this band. Mike, we saw New Order last year, and while they still work as a live entity, thanks in part to Tom Chapman’s new role as bassist (miming?), just listening to those opening moments of “Age of Consent” remind you how the band may be a spent force creatively nowadays sans Hooky.

MR: Oh, Hooky. When I interviewed Sumner and Morris last year, they didn’t hide their enthusiasm for his departure — so, I have to imagine he wasn’t a peachy guy to work alongside. (On the other hand, when I spoke with Hook back in 2010, I couldn’t have asked for a more benevolent conversation, so who knows?) Schmolotics aside, Hook’s a missed presence within the outfit today, and it’s impossible to dismiss his efforts when listening to Power. That achy rhythm in “Ecstasy” or the way he haunts the guitar lines in the back walls of “Ultraviolence” and especially the finesse he exhibits on “We All Stand” —  where his contributions slither around in this desert oasis that’s sexy, slick, and eerie — always kept New Order from being just another ’80s pop outfit.

However, I’d go so far as to suggest that Hook never shrugged off Joy Division. Focus on his basslines, when everyone’s trying to fly, he grounds it in that barbaric, weighty style that gave people reasons to call Joy Division morbid — well, with the exception of Curtis’ despondent lyrics. Well, I guess that’s not so true about “The Village”. I’ve listened to it maybe six times since we started discussing Power and all I can think about is how much I used to hate Bubblicious’ Cotton Candy flavor bubble gum.

It’s not that I forgot how great this album is — pretty much any subscriber of New Order (and/or alternative music) knows how great this album is — I guess I just forgot how tight it is. “Age of Consent” isn’t the easiest track to follow up, and I don’t think they ever do here, but they don’t lose their energy, which is something I can’t say for any of their albums following this — well, maybe Low-Life. The feelings go up and down on Power, but that youthful adrenaline, the exploratory nature of what it feels like to start creating something, is rampant. And that’s something to really appreciate.

JG: Agreed. When looking back, Power may not be their finest hour, but it remains a fine album nonetheless. New Order followed it up with the arguably superior Low-Life, but they wouldn’t have reached that level of quality and the success that followed without Power, Corruption & Lies. It’s that rare release that acts as both a legacy album andtransition album. Normally, after an artist or band releases the latter, they get a pat on the back for “thinking outside of the box” and being “brave” enough to switch up the formula. However, those artists don’t get to walk away with an “Age of Consent” or “Leave Me Alone” on their records. Because they obviously suck.

Before wrapping this up, another shout-out to Stephen Morris. In an era where drum machines were becoming all the rage, he was a fucking drum machine. Thirty years later, he still is. There aren’t amazing drum solos on Power, but the ability to not only maintain the rhythm but the pace on the majority of these tracks is highly underrated even today. I love John Bonham and Keith Moon freakouts as much as the next fella, but the drumming on “Leave Me Alone”? Sometimes less is more.

Music aside, the trajectory New Order with Power is similar to that of Pink Floyd after they lost their leader. The main difference is that Sumner, Hook, Morris, and Gilbert had the brass to change their name (I say that as a dedicated Floydian, by the way). The band has never escaped the shadow of Curtis, but that doesn’t mean they haven’t been able to lie out and get some sun most of the time.