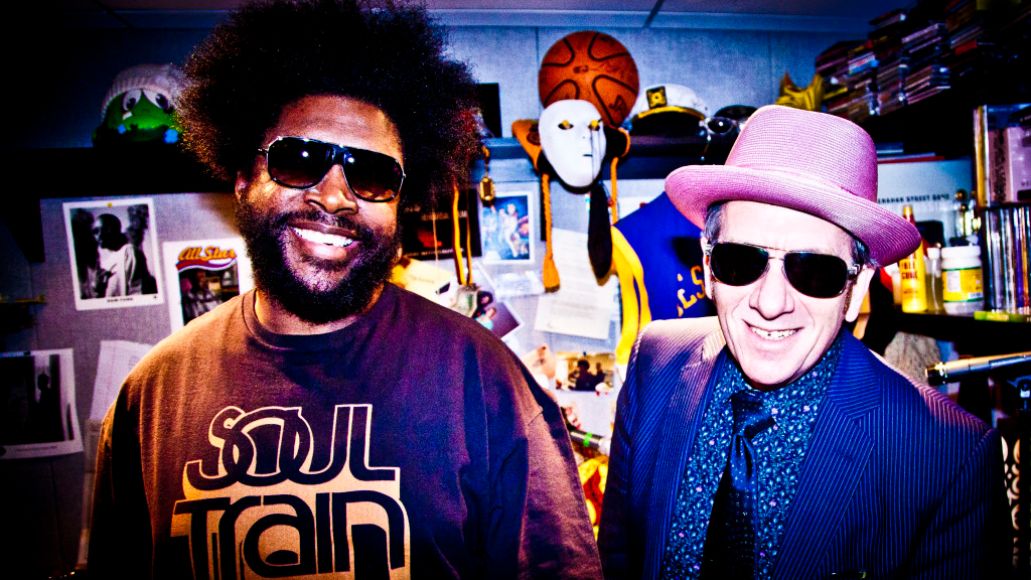 Elvis Costello and The Roots will release their collaborative album, Wise Up Ghost, on September 13th through Blue Note Records.

As previously reported, the project came to fruition following Costello’s March 2012 appearance on Late Night with Jimmy Fallon, where The Roots’ serve as house band. “It was really love at first sight,” Questlove said of Costello in an interview with Billboard. “The second time he came on, we surpassed the first one. So by the third time, he was like, ‘Let’s stop messing around and do something together.’”

While the original plan called for only a few songs to be recorded, the group found themselves with “13 or 14 songs” almost immediately. “But then we said, ‘Ooh! Wait a minute! Let’s replace four of these songs with four better songs!’ And now we have the tightest 12-14 song collection out of about 20 songs that we made.”

According to a press release, most of the recording sessions took place in secret at Feliz Habitat Studios, though they also recorded “in plain sight” at Costello’s Hookery Crookery Studios. The album was produced by longtime Roots associate, Steven Mandel together with Costello and Questlove. La Marisoul, lead singer of the Los Angeles group La Santa Cecilia, also appears as a guest vocalist.

Costello describes the album as “the shortest distance between here and there” and containing “both rhythm and what is read”. Questloves adds, “It’s a moody, brooding affair, cathartic rhythms and dissonant lullabies. I went stark and dark on the music, Elvis went HAM on some ole Ezra Pound shit.”