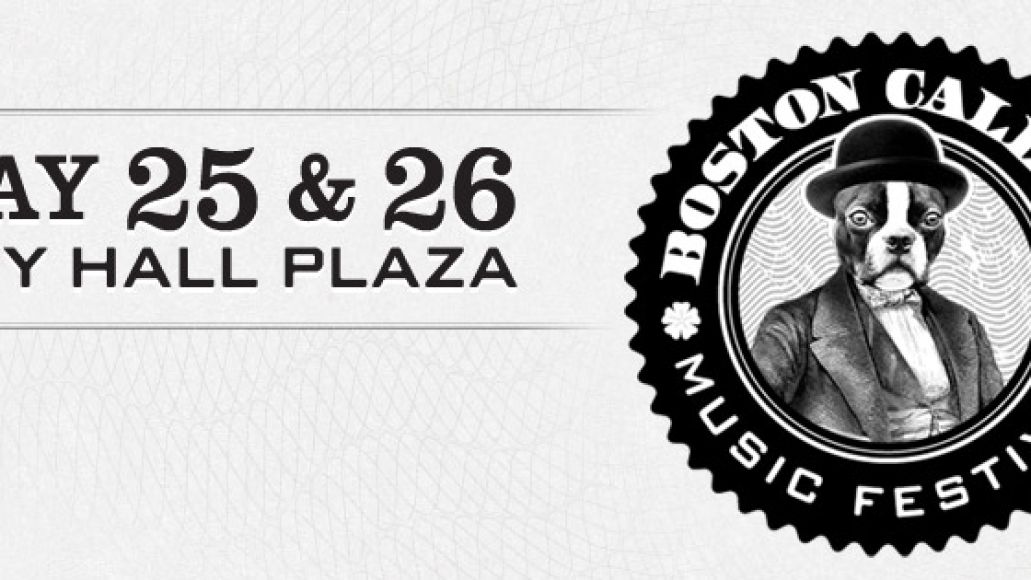 Boston has recently been shaken, and for awhile there was a disconcerting haze we all seemed to be walking through. But out of this darkness, the catchphrase “Boston Strong” has sprung forth, and not without reason. We’re a city that isn’t going to let anyone else hold us back. You can hit us in the heart of our city, but we won’t fold. You can beat us on the field for 38 to 86 years, but we’ll keep coming. And you can throw the coldest, rainiest summer weekend of the year at us, but we’re going to put on our first Boston Calling festival as scheduled, and we’re gonna have a wicked good time.

That seemed to be the general vibe even on the damp and dreary Saturday. The weather may have made the first day an arduous experience, but the sold-out crowd soldiered on, many holding down spots along the main stage rails all day. Despite being ranked both a meanest and worst dressed city by various publications, there was a lot of comradery in City Hall Plaza. From massive dance circles and conga lines to police officers gently threatening to “kick your ass out that door” before shaking your hand and telling you to have fun, people were clearly there to enjoy themselves. 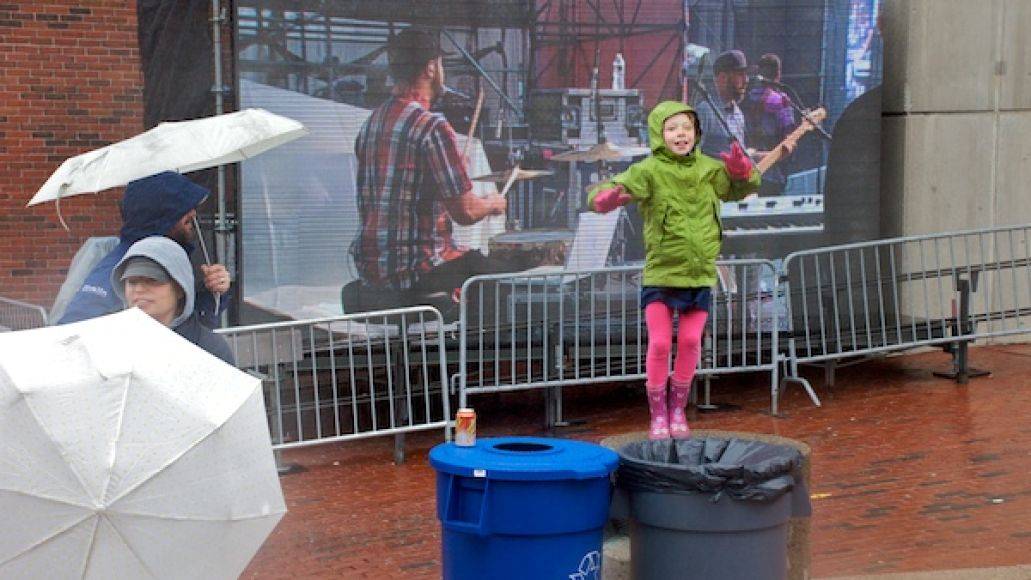 Food choices and activity options may have been sparse though well priced and lines for the main beer garden entrance and re-entry gates may have been jammed due to having only one guard checking wristbands, but all in all the fest was markedly well run. Every conflict-free set started right on time, occasionally while applause were still fading for the act ending on the other stage. The festival staff were some of the nicest I’ve ever encountered; I’ve never seen photo pit bosses actually try to learn everyone’s names so they could say “hi” on the way in and “thank you” on the way out. Throwing a festival in the middle of a major city center must provide some logistical issues, but Crash Line Productions pulled it off with aplomb. (Though considering the events of April, one would have expected a bit more caution from security checks at the entrance.)

So even with a strange month prior and a wet start, Boston Calling rang with success. And the Hub has needed an event like this. We’ve got a great music scene, full of audiences who’ve been itching not only to have adored national bands come play their city, but to discover new ones and introduce the world to their local favorites. Each band that came to this inaugural festival had a call to make, and it was up to the sold-out crowd to answer. Will they answer again for the just announced fall edition? If the inaugural weekend is any indication, you bettah frickin’ believe it. 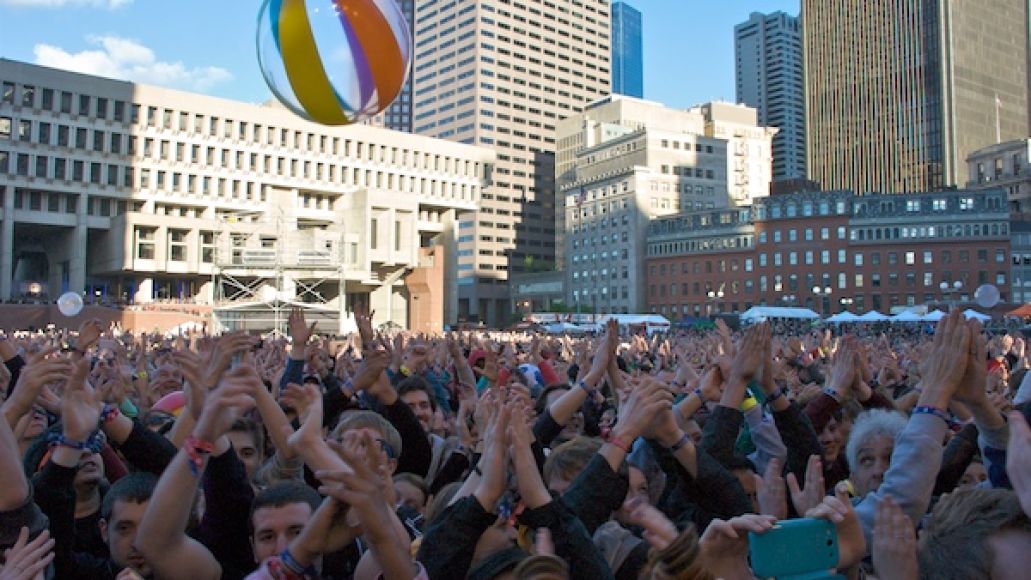 Who answered?: A younger, greener crowd on Saturday, and a more alternative, college-aged crowd on Sunday.

Do I answer?: A festival in the heart of my home city? Wicked. 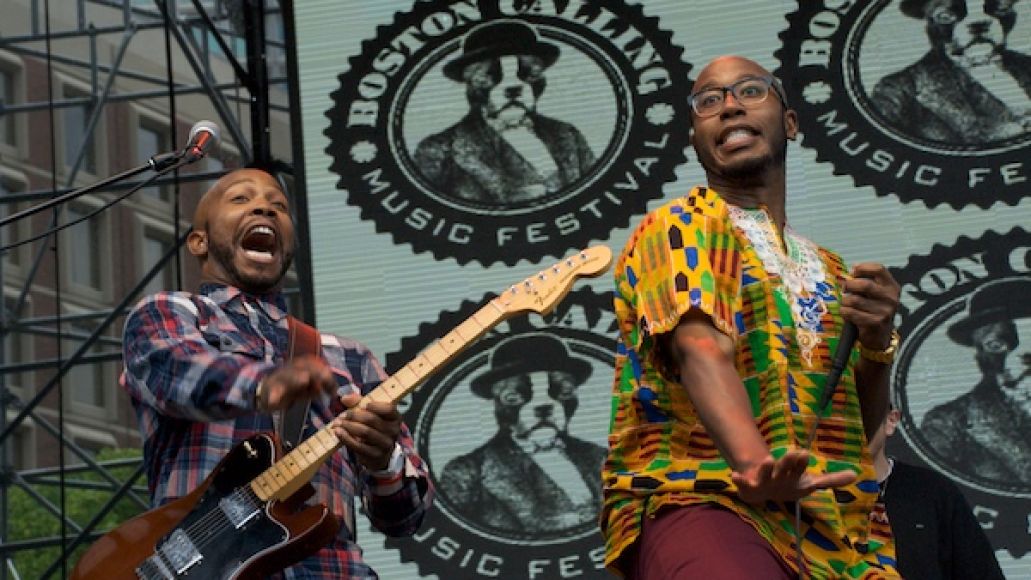 Their call: “I fucking love you, Boston,” repeated five times in a row by frontman Fredua Boakye.

Who answered?: A bunch of young kids psyched to have a festival to call their own in their city.

Bad Rabbits have a reputation around New England for their high octane live shows, so they were a no brainer to open the first ever Boston Calling. Their funk R&B with rock undertones – most noticeably and successfully on opener “We Can Roll” – brought a lot of energy, occasionally reminiscent of Morris Day & The Time, Bell Biv DeVoe, and “Savin’ the Day” from the Ghostbusters soundtrack. The lyrics, on the other hand, often felt insipid: “Your eyes, your thighs, your booty, and your smile” goes the listing in “Can’t Fool Me”. Still, Boakye waving about like a monkey and those synchronized full-band dance moves had the crowd enjoying the small break in what would become a nearly-constant drizzle.

Do I answer?: Some flirty texting, but nothing serious. 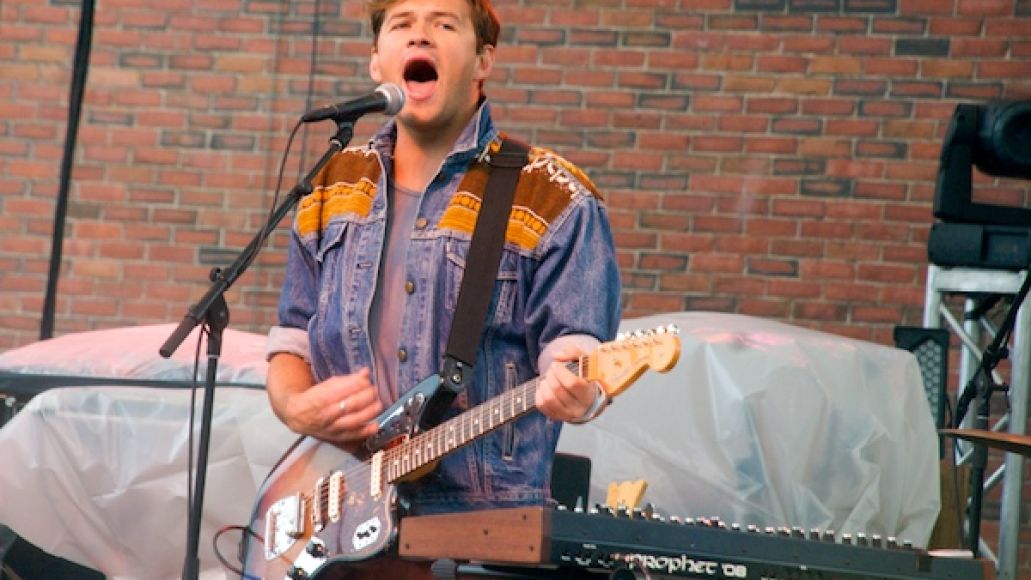 Their call: comes squealing and synthing from the back of a smokey 80s dance club.

Who answered?: The band’s own synth player, Nick Paul, who sang along and played air-bass as if he were listening to his favorite band in the shower.

“You came all the way out here to stand in the rain and watch some people play music,” St. Lucia’s Jean-Philip Grobler commented. “You’re amazing.” As it became clear that ponchos were to be an all-day requirement, Grobler was proving to be no throwaway electro-pop act. He penned some great tunes on his self-titled EP, and should be equally proud of the band he’s put together to bring them to a live stage. Keyboardist Patricia Beranek wore a constant, soft smile that threatened to smirk right off her face every time she gazed at the crowd, and Paul’s enthusiasm was contagious for the crowd as well as his bandmates. The band got the audience to belt “don’t go, don’t go away!” throughout the entirety of “We Got it Wrong”, and standouts “Before the Dive” and “All Eyes On You” came off particularly well. Grobler might get all the credit on record, but this is a total team effort on stage.

Do I answer?: Before hanging out with them, I’d have let it go to voicemail; now, I’ll pick up and ask where the party is. 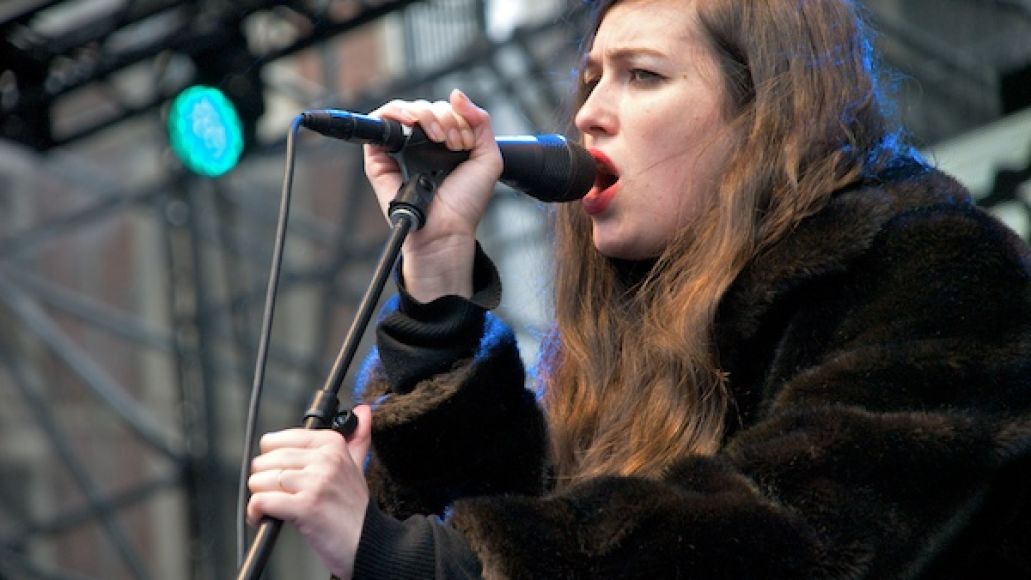 Who answered?: The rain, which started up again as soon as Brian Oblivion said, “Next time we’ll try to bring the sun with us.” Thanks, Bri.

This show was Cults’ return to the stage after “six months in a dark hole recording [their] new record,” and as such, it was rather disappointing. Madeline Follin, dressed in a fur coat that made me jealous of her warmth, seemed happy enough to be back on stage, wearing a smiling and seeming all together less bored than the last time I saw them. However, Cults just haven’t changed much since their debut. That’s fine in general, but when you make a comment about your new record and then break into another of your debut’s 11 tracks (“Rave On”), you’re not giving much space for patience. It would’ve been nice to hear something new to spice up a twee-pop setlist in danger of becoming stale.

Do I answer?: Tell ya what: change that voicemail message and I’ll call you back. 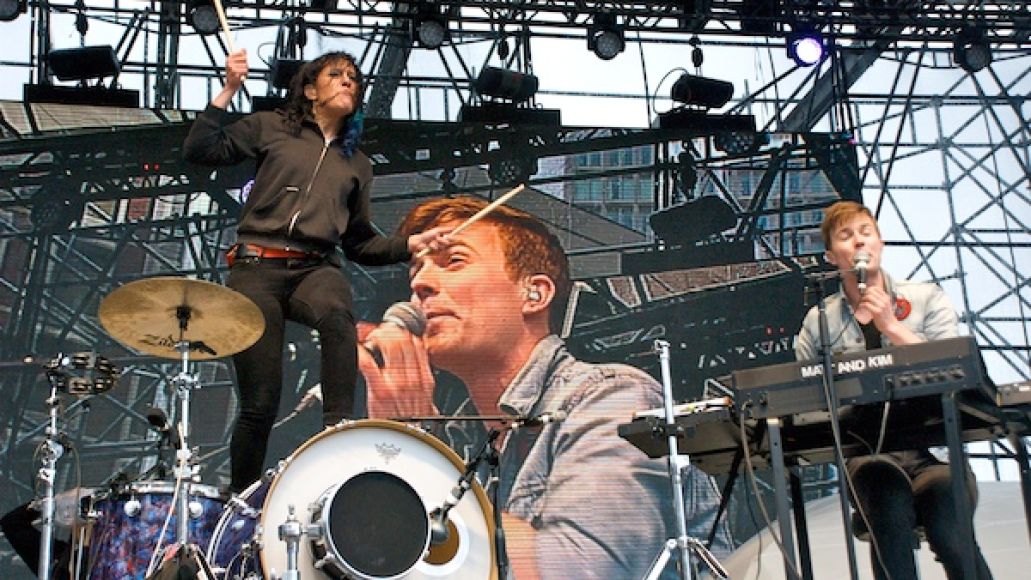 Their call: A “wet and dirty” two person party with samples of hip-hop and EDM snuck in between jams.

Who answered?: People who wanted Kim’s shoes. “If you can get crazier than me,” Kim said, “you deserve my shoes.”

I was completely sick of Matt and Kim a year ago. But after some time away, it was fun seeing the pair again. Their energy was boundless, with Kim jumping up on her kit or stalking about smashing symbols like a child discovering sound during “Ten Dollars I Found”, and Matt donkey-kicking from his keys. Between a setlist heavy on Lightning tracks (“Let’s Go”, “Overexposed”), there were random EDM and hip-hop covers and samples thrown in, from “Better Off Alone” to “Harlem Shake”. Matt apologized for the impromptu dance parties, which saw both band members crunking across the stage. “There’s this magic button on this thing,” he said, “I just can’t help pushing it!” No one was complaining, as the duo’s vigor offered welcome reprieve from the damp day. And yes, Kim did toss her shoes into the crowd at the end.

Do I answer?: I might let it go to voicemail, but I’ll holler back eventually (even if Matt assaulted me with a confetti bomb to the shoulder). 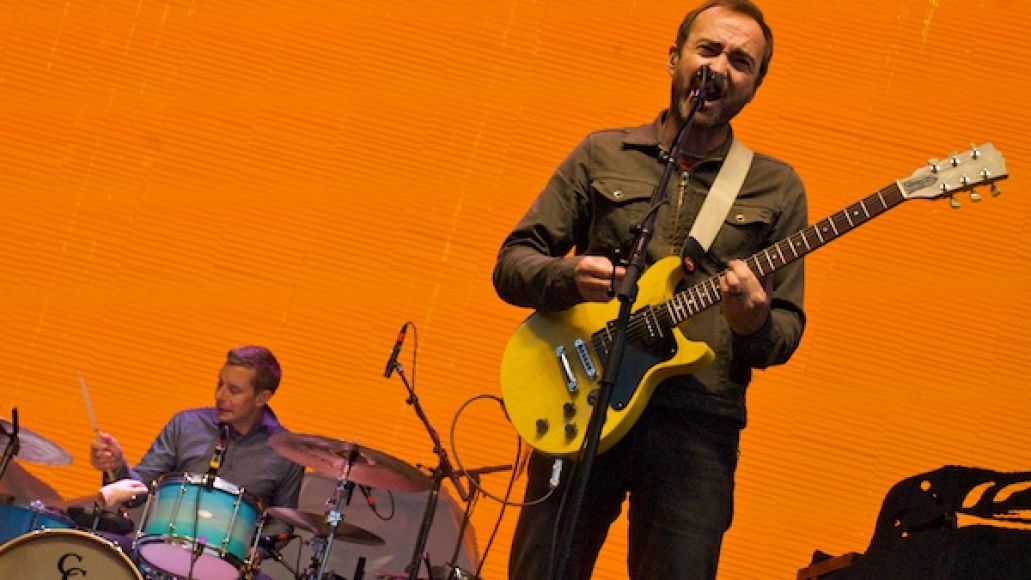 Their call: A louder, stronger version of what constantly droned from my college girlfriend’s speakers.

Who answered?: Mayor Thomas Menino, who came out before the set to praise the festival and shout, “Go Bruins!”.

For me, The Shins are that band your friend (in my case, ex-girlfriend), assured you is the greatest thing around, but it just never clicks. That being said, I was pleasantly surprised at the satisfaction I found during their set. “Caring is Creepy”, “Australia”, and even Port of Morrow’s “Simple Song” didn’t make me want to press “skip” like they might on an internet radio station. Perhaps it’s the crew James Mercer has filled his lineup with, but there was an edge I’m not used to hearing on a Shins album. Then again, maybe that’s just a byproduct of being in the photo pit; as soon as I went back to the covered beer garden on the City Hall terrace (yep), the band started to lose me. “Kissing the Lipless” and “No Way Down” just couldn’t make it through the rain drops to my attention, and so I let the music score my dinner as I sat sheltered from the storm.

Do I answer?: I’d say hi at a party, but how often do you really talk to your ex? 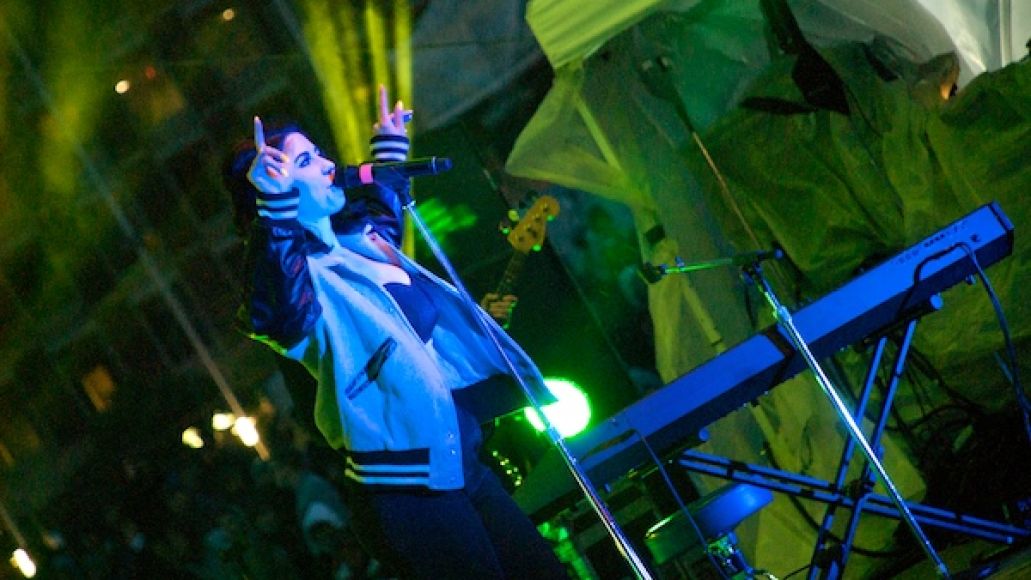 Their call: is probably coming from my most recent ex-girlfriend’s speakers right now.

Who answered?: Lots of teenaged girls with pink ribbons in their hair and black hearts painted under the corners of their eyes.

From the moment Marina Diamandis, AKA Marina & the Diamonds (that’s her stage name, not her band) walked out, I felt like I was watching affected pop gimmickry. She entered wearing both a varsity jacket and a wedding veil, and carrying a bouquet, which promptly got shredded when tossed into the crowd. Every twist of her hips or dainty hand bow felt put on. Her songs are filled with the type of sexuality and vixenish “femininity” that made the number of kids at the show unnerving. She can try to pass it off as the character Electra Heart all she wants, but when she’s blowing kisses at her crotch and putting on a sash that reads “Miss Selfish Bitch” to the cheers of young girls, the line isn’t there. Still, she has an interestingly operatic voice, and her songs are filled with deep pop hooks. The crowd loved her, exposing their cellphones to the rain in order to snap that pic, and madly obliging when asked to “lose your shit with me.” But as a whole package, she could use a little less marketing and a little more sincerity.

Do I answer?: Nope. I’ll call up Ellie Goulding for the talent and Lady Gaga for the show, thank you very much. 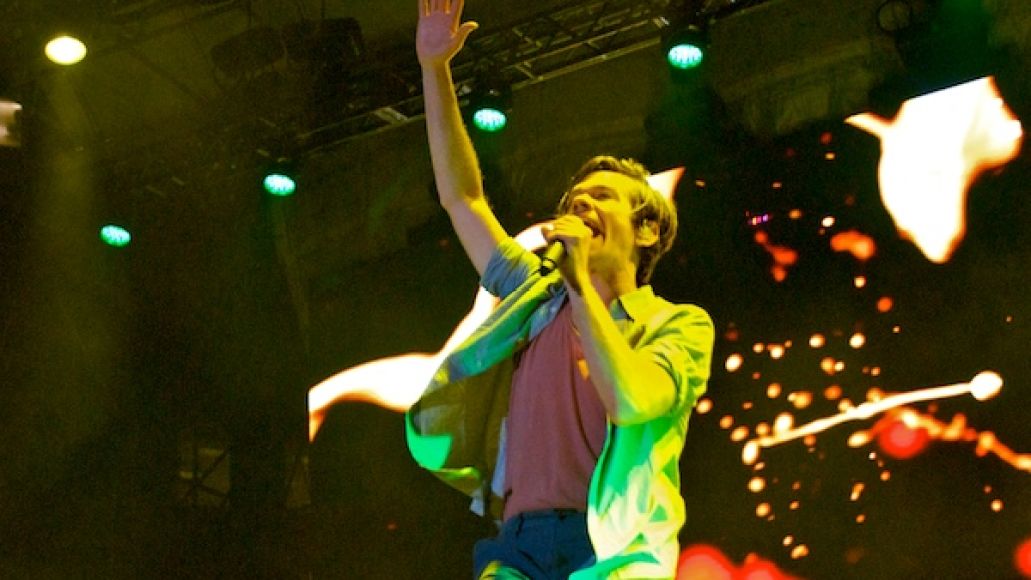 Who answered?: The same kids who had been on the main stage’s front rail all freakin’ day.

Honestly, at this point in the night I was so cold, wet, and tired I was having trouble taking notes or setting my camera. I stayed for my three songs in the photo pit, hit the merch booth for my t-shirt, and headed for the T. During “All the Pretty Girls” and “One Foot”, Nate Ruess appeared as ceaselessly peppy as ever, thrusting his fist into the air and spinning about at every opportunity. The cold and wind may have gotten to guitarist Jack Antonoff, on the other hand, as he noticeably pushed his way through the weather. Still, this was the band the crowd had come for (well, them and Marina), and they weren’t going to let their fans down. As digital paint splashed the giant screen behind them, they kept their energy as high as possible. “I’m not going to ask you to clap along,” Ruess said as I entered Government Center station. “I noticed while I was trying to clap up here that it hurt,” he remarked of the cold, instead suggesting the audience huddle together and sing along. I’m sure they did, but I was gone.

Do I answer?: My fingers were too cold to even press “answer”.