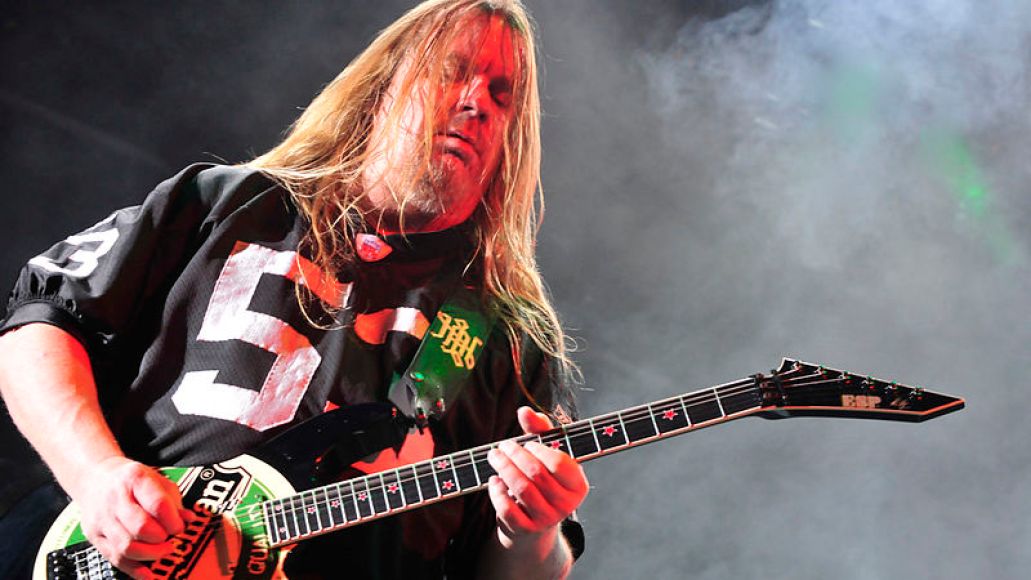 On May 23rd, thousands of Slayer fans will be able to pay their respects to the band’s late guitarist Jeff Hanneman at Los Angeles’ Hollywood Palladium for what’s being billed as the Jeff Hanneman Memorial Celebration. Hosted by the surviving members, the free, all-ages, open-to-the-public event will take place from 3:30 – 7:30 p.m on a “first come, first in” basis. According to SPIN, the colosseum holds about 4,000 people so get there early because the friends and fans of Hanneman will roll very deep that day.

While further information on the event is still forthcoming, you can read  the band’s official announcement that was posted their Facebook:

The Jeff Hanneman Memorial Celebration will take place on Thursday, May 23 at the Hollywood Palladium in Los Angeles from 3:30 – 7:30PM. Hanneman passed away on May 2 at the age of 49.

The Memorial Celebration will be free and open to the public on a first-come, first-in basis (subject to venue capacity). All ages are welcome, and paid parking will be available around the venue.

Jeff Hanneman helped shape Slayer’s uncompromising thrash-metal sound as well as an entire genre of music. His riffs of fury and punk-rock attitude were heard in the songs he wrote, including Slayer classics “Angel of Death,” “Raining Blood,” “South of Heaven” and “War Ensemble.” Hanneman co-founded Slayer with fellow-guitarist Kerry King, bassist Tom Araya and drummer Dave Lombardo in Huntington Park, CA in 1981. For more than 30 years, Hanneman was the band member who stayed out of the spotlight, rarely did interviews, amassed an impressive collection of World War II memorabilia, was with his wife Kathy for nearly three decades, shut off his phone and went incommunicado when he was home from tour, did not want to be on the road too late into any December as Christmas was his favorite holiday, and, from the time he was about 12 years old, woke up every, single day with one thing on his mind: playing the guitar.

It was once suggested to Slayer that if they would write “just one mainstream song that could get on the radio,” they would likely sell millions of records and change the commercial course of their career, similar to what had happened to Metallica with 1993’s “Enter Sandman.” Jeff was the first to draw a line of integrity in the sand, replying, “We’re going to make a Slayer record. If you can get it on the radio, fine, if not, then fuck it.”