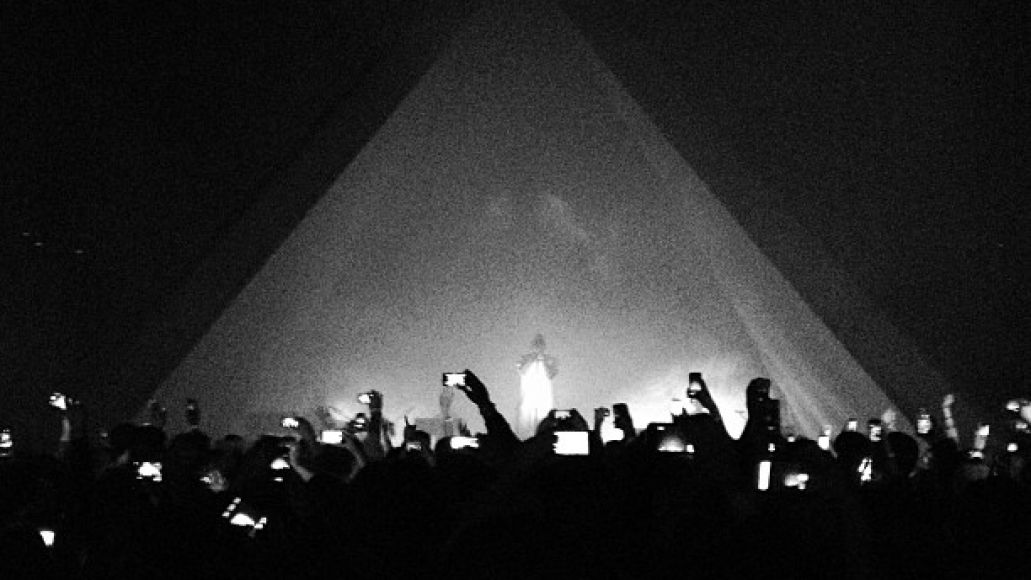 Kanye West previewed new music, and showed off his new pyramid during a private concert at Roseland Ballroom in New York City last night, which was hosted by Adult Swim. The first clip features the same song previewed by Hudson Mohawke during a DJ set in Europe last weekend. The second clip appears to be of a freestyle dedicated to Kanye’s girlfriend, Kim Kardashian. Watch the footage below (via Kanye To The).

Kanye also took time to address his recent run-in with the paparazzi with another one of his trademark rants. He sang/said:

“[I had a friend ask me, ‘Are you gonna go on] SNL and you’re going to do like a skit about the paparazzi and shit and like humanize yourself?’ I ain’t here to apologize to no motherfuckers man. It ain’t about me humanizing myself. At what point did I become unhuman where I had to turn myself back? Or maybe i was demonized. Or maybe I was treated inhumane and not human in that kind of situation.

“I ain’t no motherfucking celebrity. I ain’t running for office. I ain’t kissing nobody’s motherfucking babies. I drop your baby and you sue me and shit. I’m trying to make some music that inspires people to be the best they can be. I don’t want nobody to ask NOTHING ELSE OF ME. Don’t ask nothing else of me. Motherfuckers chasing you down ’bout to make you crash and shit. And all they want is one nigga to laugh and shit. Hell nah I ain’t doing no motherfucking SNL skits, this my goddamn life. This ain’t no motherfucking joke. That’s it. Stop that shit right there.”

Saturday should be fun.