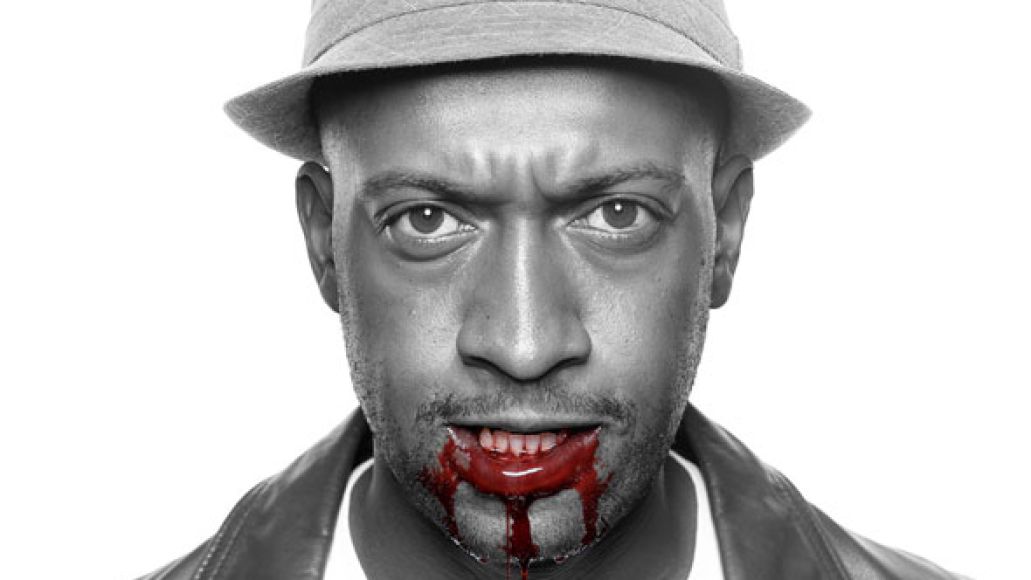 Bim Thomas is Obnox and Obnox is Cleveland. He’s never going to go Lebron. His is an industry that will never rust. He could give a shit about your music scene or your football team, as he sings in “Being Cleveland” off his sophomore LP Corrupt Free Enterprise.

“I ain’t ashamed of my city. I don’t give a shit what you think about my city. Like Williamsburg or something like that? This is like Disneyland out here. Gutted the place and turned it into this? I mean, it’s real safe, and they’re prospering and flourishing, and god bless them, but I just don’t feel that culture anymore when I go to New York. I’m usually hanging with somebody from Ohio when I’m out there. Ohioans appreciate you.”

Thomas is clamoring around his Cleveland house when we talk, sounding like he’s either putting away dishes or tripping over them. He has to pick up his daughter Mia from school soon, so we can’t talk for too long. I called him on his cell phone, as opposed to his landline, which he offered as an alternative if his phone died. He’s got to be the only black 41-year-old single father DIY garage rock drummer/singer from Cleveland who still uses a landline.

“This city has so much weird history that nobody focuses on the good types of people that are around here — the very creative people and the tradition of creativity that come from here. There’s never really been a shit-ton of money made from any one Cleveland musician or artist. You got people here and there that went away and became whatever the hell they are, and could be happy to be from Cleveland, but nobody in the city is out-and-out successful.”

Thomas says this like a pro, which he is. For two decades he has been hustling in Ohio bands, 15 years with the Columbus two-man blues-punk act the Bassholes, then eight with Cleveland’s own This Moment In Black History, and still a couple of records with Hozac’s scuzzy Puffy Areolas. Now, Lamont “Bim” Thomas is Obnox and Obnox is his solo project, his janky outlet to do whatever he wants, to record the way he wants to record. 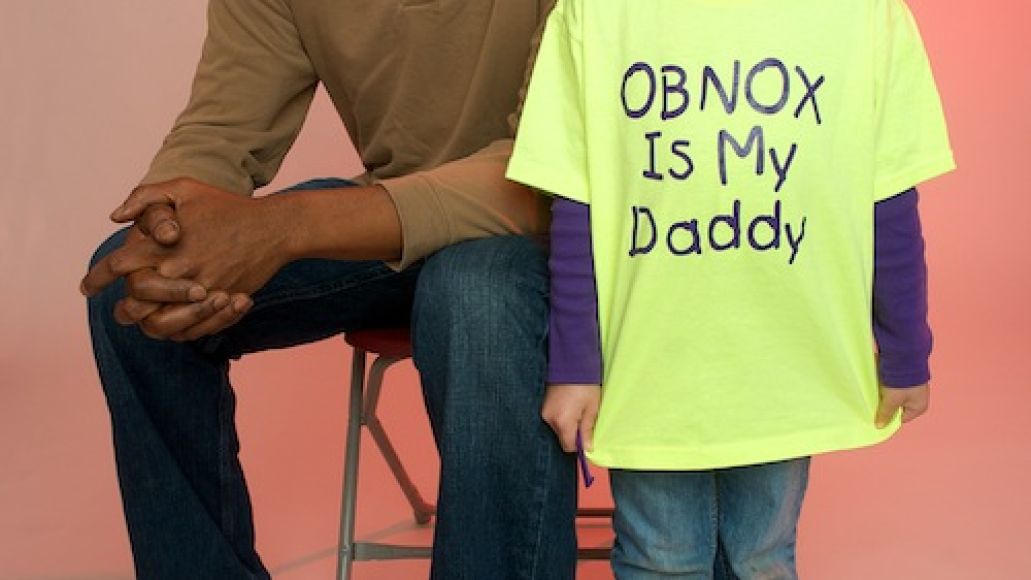 “The hang” is time spent in the community that formed in Cleveland, his friends from old bands and new — his bandmate, and touring drum sub Elijah Vazquez, his engineer and Cleveland mainstay Paul Maccarone —  can be found at some point or another at a house called the Black Eye on the East Side of Cleveland.

“The guys that live there — it’s a good environment. If I got two verses and I need three, I put the tracks up and hang around with those guys. Drink a little beer, smoke a little herb, then, ‘Hey, here’s the third verse.’ ‘Alright, open up the mic.’ Real simple, real fun shit. Separate from the music business, almost. Nothing fucking it up.” That’s the corruption-free enterprise he’s talking about.

The modus of Obnox is off-the-cuff recording. He recorded his debut LP I’m Bleeding Now in seven days in 2011. Since then he’s put out a grip of sloppy EPs, including the uber-psych freakout on Rojo EP (Permanent Records) and his most recent double 7″ Canibible Ohio EP (Slovenly Records). Canibible Ohio is more of a staging record for Corrupt Free Enterprise: a couple of lo-fi, blown-out, garage jams, a fairly straight-ahead cover of “Hang On Sloopy”, and its lead single, one of Obnox’s strongest songs to date, the trashy hip-hop fusion of “Deep In The Dusk”.

“Me and Don [Howland] wanted to do stuff like [“Deep In The Dusk”] in the Bassholes,” Thomas says. “But when Elijah joined [Obnox] — he was always a beat-maker anyways so I wanted to give that a shot myself, but maybe with a less of an MC take on things more of a singer thinking about punk — my range. I don’t claim to be a rapper. You can’t catch me out freestyling nowhere, but I know what good rap sounds like. Roll that up in a punk joint — see what that be like.”

He clarifies, “But let’s do it right! Not like some rapper trying to fuck with rock and roll to make it seem like his mind’s wide open. No, fuck that.”

Thomas’ reckless experimentation and improvisation are what makes his whole catalogue of Obnox sound like you’re hearing something you shouldn’t. It looks raw but sounds cooked. His SoundCloud page is full of demos and errant ideas, including an early recording of “Deep In The Dusk” with a more classic funk/soul feel to it. It makes you feel apart of “the hang”  because you can both see these songs evolve and there ain’t but little ProTools happening after the fact. It’s covered in dirt, bathed in poverty, flown in the face of fidelity. You can pick it up for cheap and it definitely doesn’t glint. He’s not making money and he’s working two jobs. He’s definitely Cleveland.

“I care about all the parallels with the birth of punk and the birth of hip-hop. Basement shows, limited releases, 12″ singles, flyer culture. It all comes to be the same way; it’s all the same shit to me.”  Those parallels of punk and hip-hop help to define Thomas and his DIY aesthetic. Rap was born out of necessity, using soul records as percussion because there was no drum set around to play. Punk was born out of necessity, also out of frustration for  lack of means. The necessity to create at any (read: no) cost is the crux of Obnox.

Though CFE is mostly filled with white-light, white-heat punk bombs, that Detroit soul sneaks in and colors the record with a little bit of that swing. Behind the kit, Thomas goes hard in the pocket. Citing influences like Meters drummer Ziggy Modeliste and the jazz institution of Art Blakey (even alluding to one of Blakey’s most seminal works “Drum Thunder Suite” on his last record), there’s a free-jazz freakout style to Obnox’s playing that runs through his music. Infusing punk with his black heritage, playing in Ohio for over 20 years is just as important to him as trying to pave new roads.

“The game needs brothers out here that have knowledge of where punk has been and can truthfully see where it’s gonna go. A lot of motherfuckers think punk is dead and that it’s doing some of the same old things. Yeah, it needs some swag and needs some life. Needs money, too! We can’t just be frontin’ this punk image the whole time. Who the fuck wants to be involved with that? Who wants to be broke? You know what I mean?”

I ask him what he would say to a young black kid who wants to get into punk:

“My advice to a young dudes trying to get into punk-rock is: Fucking do you. ‘Cause deep inside a young brother, there’s gifts. There’s been a lot of cases that those gifts aren’t nurtured properly; people’s minds are on other things instead of the potential that a young brother have. Stay in your lane. Listen to everything. Listen to soul. Listen to jazz. Study white folks! Never fucking be an Uncle Tom and think that just because you got a little talent you’re in and you’re accepted. Don’t do shit just so white people will accept you, because nine times out of 10, that shit is just a fucking pipe dream. You would have rather been yourself and a real brother instead of just sitting around trying to gain acceptance from him, instead of trying to create your art through you and your value: what you hold near and dear as far as tradition and history. ” 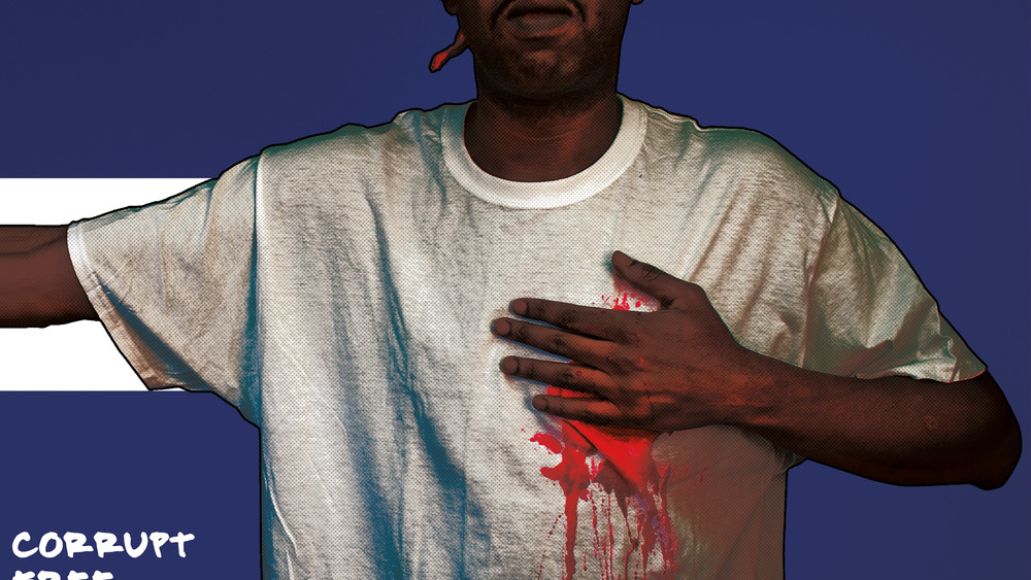 Corrupt Free Enterprise is the culmination of sorts. Thomas’ years in the game and his heritage make this 2xLP more of a historical document than it is a four-sided LP. Just look at the four bands Thomas chose to cover for CFE: the ’80s Akron band Ubarn Mutants (“Fade Out”), an old Bassholes track (“Swimming Blues”), Tom Waits’ theme song to The Wire (“Down In A Hole”), a Cheater Slicks track (“Ghost”) and an Eddie Floyd Stax Records single (“Good Love/ Bad Love”). All five are covers that are close ring from him emotionally, aesthetically, and personally.

“I’m not thinking about Greg Ginn or any of these motherfuckers. Jimi Hendrix — shit, forget about him. Fuckin’ Eddie Hazel — forget about him. Those motherfuckers were who they were because they took the style where they thought it should go. And this is what I’m doing now: hacking away the guitar, talking shit with a big drum endeavor. That’s it. It’s easier than it sounds, trust me.”

Thomas has to leave to go pick up Mia from school — he’s already a bit late. I apologize for keeping him and he brushes it off. At this point in his life, Thomas has two things: his music and his daughter. Mia’s even got a little drumset now, for when he wants the best of both worlds.

“When you leave the crib, when you leave that baby girl, you better be going somewhere to tear the fucking house down and have the best fucking tunes. You can’t just be out here half-assing; people are paying to see you; your family’s going to miss you. You gotta go, with your head up, ready to play. I’m a grown-ass man.”

In “Being Cleveland”, Thomas sings in the chorus, “Everything is possible/ Nothing is impossible/ I make no apologies/ I’m being Cleveland now.” His vitriol toward the larger culture centers is more pride than disdain. He’s trying to hang on to his past and the harder he bangs the drum to beat out the ghosts of soul, hip-hop, and punk, the larger Obnox becomes. Relatively speaking. He’s still just a 41-year-old single father DIY garage-rock drummer/singer from Cleveland who still uses a landline.

“I’m just trying to represent that 21st century idea of a black rocker, or a black musician. Retaining those values is more important than money from somebody that tried to turn me more accessible. Be yourself and watch your ass, because if you say the wrong thing to the wrong motherfucker, you’re over. Be careful. Protect ya neck.”

Corrupt Free Enterprise is out now on 12XU records.