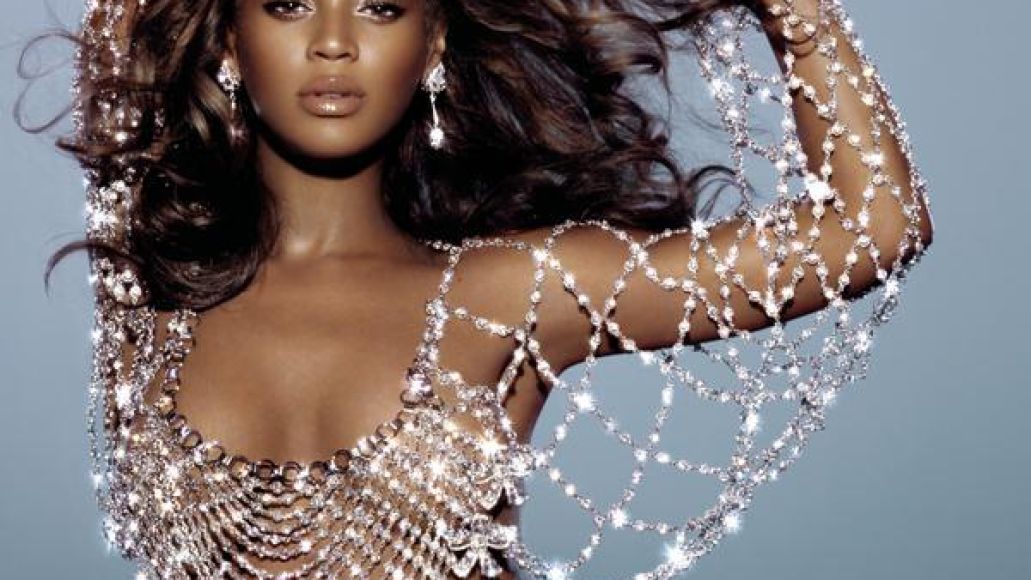 In this week’s edition of Dusting ‘Em Off, News Editor Chris Coplan and Senior Staff Writer Chris Bosman turn a loving eye toward Beyoncé’s groundbreaking debut album, 2003’s Dangerously In Love. The two discuss Bey breaking down the walls of indie puritanism, the album’s relation to another breakout act, the material’s relevancy to feminism, and how the public never stood a chance against Bey’s bootlylicious assault.


Chris Coplan (CC): I remember having to secretly love a lot of these songs way back in ’03, when it wasn’t quite cool enough yet to be into punk and the like but also to really enjoy mainstream pop. It’s weird now because the first couple of re-listens, these songs are so very clearly from 2003. Like, “Naughty Girl” is born out of the early Aughts’ idea of, like, it being cool to be a little cheesy, maybe a little ’80s in your approach, and still be very with it and sexual. But I also think that so many of these songs hold up today. “The Closer I Get To You”, which again has that unintentional cheesy vibe, seems way more heart-wrenching now than it did a decade ago (probably all that damn life experience and heartbreak I’ve been subjected to).

And, man oh man, I forgot how much she can just straight sang. I loved 4, from a couple of years ago, but so much of that album is in the same kind of “I’m a fierce diva and I’m gonna sing-talk and/or belt.” But here, I think there’s more satiny tinges, more nuance, more of a pronounced somber vibe. It’s like, the reason people loved her was the voice and the attitude and the like, but on Dangerously, it’s taken to this whole other level, and there’s just so much to offer musically. I thought 4 was diverse, but I think Dangerously is the purest example of Bey just getting to show off her range.

Chris Bosman (CB): What I remember most about Dangerously In Love is that it was one of the initial pop mortar salvos against the wall of indie puritanism, a record with a bunch of undeniable singles that even the most cynical rockist counterculture contrarian could get behind. “Crazy In Love” ended up being on Pitchfork’s top songs of the year, and as stupid of a measure as that is, when I was 17 it really meant something man. Namely, that we could both listen to Kid A and bemoan the fact that kids didn’t get it and sing along at a prom after-party to “Baby Boy”.

I also remember how this was really the first moment that Beyoncé became Beyoncé. She had always been the most visible and generally revered member of Destiny’s Child, and her going solo only seemed like a matter of time, but I don’t remember her success, her manifest destiny toward becoming Queen Bey, being anything approaching certain. And then the horn fanfare of “Crazy In Love” hit and it was just like, oh, yeah, of course she’s gonna be bootylicious 4 lyfe. 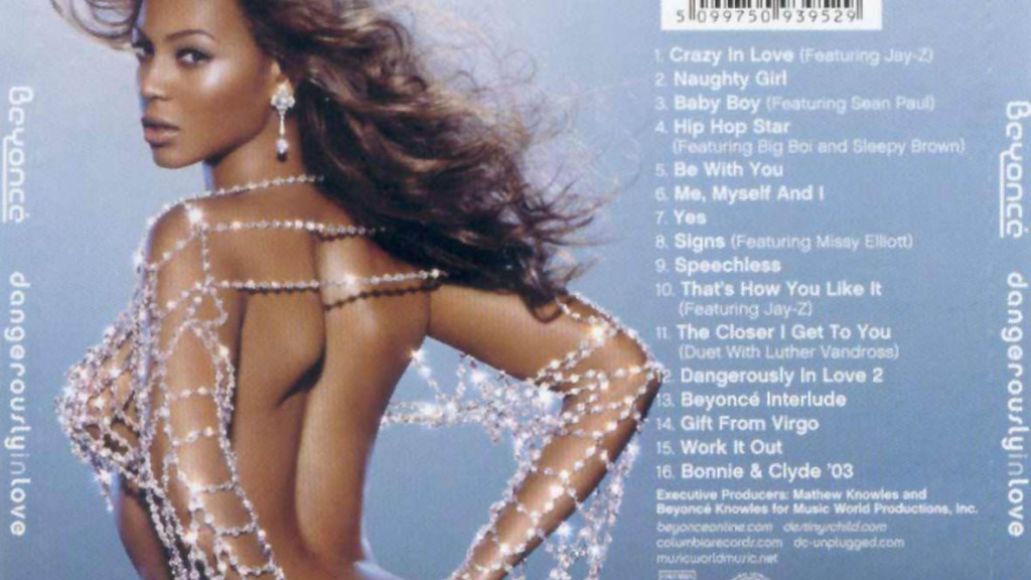 CC: I’m so glad you had such a similar experience with this record. It does feel that this was kind of the album, or at least the era, where you could strut your stuff to a song like “Naughty Girl” and then go out and smash shit to The Ramones or somebody and not feel like you’re a sell out or a phony. It was a bright and beautiful time where being a pop devotee seemed like something worth admitting (to an extent, at least).

The whole “bootylicious” deal is a really important point, I think. Like, she was fierce and diva-tastic with Destiny’s Child, but there was, at least for me, some “controversey” surrounding that. I think the whole deal with girl groups is that, regardless of talent, drive, etc., one girl is always gonna be pushed to the forefront because she can sell the most records for a number of reasons. And while Beyoncé proved that she deserved to the “leader”, Dangerously is like the cementing, definitive proof that she is amazing. It plays out like a form of validation, like “If you thought she was great on, like, ‘Bugaboo’, just see hear her on ‘Baby Boy’.” You get intense and powerful and fun and playful, but you get it packaged as the deluxe, extra sophisticated version.

CB: I see what you’re saying: people kind of had their own favorite Destiny’s Child the same way they had their favorite Backstreet Boy. It’s funny, actually, how much her rise has mirrored another former early-aughts pop group member turned solo megastar: Justin Timberlake. Justified came out only a few months prior to Dangerously In Love, and similarly served as one of those opening exclamation points to a sentence that would become their career: “¡DAMN!” Suddenly, we couldn’t remember the names of anyone else in either group. Hell, to this day it takes me a few moments to conjure up “Kelly Rowland.”

But you’re right to say that she sounds more comfortable allowing herself to be vulnerable, or cheesy, or just not quite as aggressive in general, and it works to the record’s benefit. Every subsequent Beyoncé record has kind of had to live up to the ideal of Queen Bey, leader of a legion of strong and confident “Independent Women”. She’s had to deal with sites like BeyoncéIsNotAFeminist (which I won’t even link to because fuck those people), critical expectations of continuing pop genius, and also criticisms surrounding her as a person: womanhood, motherhood, racial issues, etc. It’s not that she hasn’t pulled them off at times, or at least made music that’s transcended those expectations (ALL THE SINGLE LADIES ALL THE SINGLE LADIES), it’s just that Dangerously sounds relatively untouched in retrospect, with Beyoncé demanding the type of attention she now receives automatically.

CC: I was unaware of the proximity that Dangerously and Justified had. Not to put too much focus on JT’s record, but it’s one where, like you were getting at perhaps, I really noticed Justin as a truly viable pop artist. Still, the thing with that record is, as much as I love it, he feels propped up by Timbaland, Pharrell, etc. to a certain extent. Like, would he be the guy he is or was trying to be had it not been for them? Beyoncé, on the other hand, came into the LP with more experience as the star/main attraction, and her collabos with Vandross and the like feel more equal, like she “deserves” to be on that level already.

And, BTW Bosman, thanks for introducing me to BeyoncéIsNotAFeminist. Yikes. I think the whole feminism argument isn’t really fair to have. Yes, she says that she is a representative of independent women, and then she has lots of love songs dependent on a man (specifically Hov). But I think she is, at least on this LP, a really good example of a kind of realistic, well-rounded human being. She’s powerful and sexual (“Naughty Girl” still can make anyone all hot and bothered), but she is also unafraid of being totally and utterly infatuated with her boo (“Crazy In Love”). She also has a real sweetness and innocence to her (“The Closer I Get To You”) while leaving room for a sense of fun and abandonment (“Hip-Hop Star”).

Sure, lots of divas try to be everything to everyone, but Beyoncé does it so organically. And maybe I’m looking at this way too simplistically, but who cares about her role as a feminist. She makes pop music, as in “to be popular to everyone”, not to discuss ideas about gender and stereotypes. If little girls listen to these songs and feel empowered, even if it’s not by the strictest academic standards, that’s still a victory to me.

CB: Let’s stop being two (white) dudes talking about feminism because that is The Worst. That being said, your point still stands and is valid: Beyoncé as a role model is a good thing, because what she stands for is a woman doing exactly what she wants to do. She wanted to become her own woman, and stand apart from the group that made her famous. That move could have blown up in her face in a number of ways. She could have lacked strength outside of a group. She could have ostracized herself from the fans of Destiny’s Child by being too diva-tastic. She could have been too schmaltzy or too aggressive or too different in some way. But Dangerously In Love succeeded most basically because it was made of the stuff that people loved about Destiny’s Child, but just more of it. And more turned out to be just what Beyoncé needed to go from fantastic R&B artist to icon.

CC: We could easily end on your sentiment (and thus avoid further possibilities of attaining Worsedom). But I wanted to expand on your point just a little. I couldn’t agree more that this is everything we love about Destiny’s Child, but cranked to 11, no, 12. I had this idea going in that what helped kicked her into overdrive was her relationship with Jay-Z. They were having this secret, not so secret relationship, and he’s all over the LP (“’03 Bonnie & Clyde”, which should have been included on the standard released, is still a huge moment in modern R&B-rap fusion). My whole notion was that somehow his confidence and swagger and love (can’t believe I wrote that) helped really give her that boost to reach her potential. And to an extent, maybe that’s true, but it could also just be really great timing.

It’s like you said: she could have easily gone a totally different direction with this record. But she didn’t, she hit one right out of the park by going as gracious and diva-tastic and as fierce as she could. And I don’t think that, ultimately, it had anything to with outdoing anyone or extra confidence. This is, to me, the performer she was meant to be all the time, and Dangerously is just a snapshot into her evolution, the already glamorous caterpillar popping out of a cocoon to be the most glimmering butterfly of them all. OK, ending with a butterfly analogy now makes us The Worst, but I’d do it again and again and again in Queen Bey’s name.