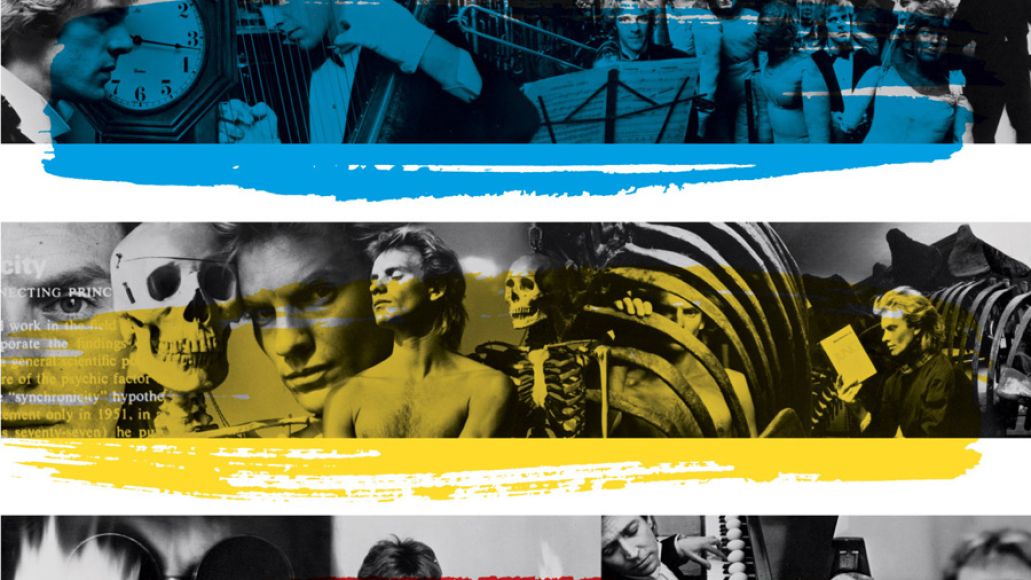 In this week’s edition of Dusting ‘Em Off, Editor-in-Chief Michael Roffman and Research Editor Len Comaratta look back on 30 years of The Police’s critically-acclaimed, commercial juggernaut of a fifth (and final) album, Synchronicity. The two discuss its celebrated legacy, the “Sting Issue”, and the band’s separation, reunion, and then separation again.

Michael Roffman (MR): The Police has always been a unique act in my memory banks. For some reason, I attribute their sounds to my childhood; maybe it’s the reggae beats or Andy Summers’ axework that recalls my days of 8-bit gaming. Either way, I can’t hear them without waxing nostalgic, and wishing for days by the beach, extra-short shorts, and Don Johnson. Then, I forget that Synchronicity came out in 1983 and the band was technically finished before I was even born. So, yeah, a major disconnect for myself.

When it comes to their discography, I’ve always appreciated their earlier stuff more — specifically their first three albums: 1977’s Outlandos d’Amour, 1979’s Reggatta de Blanc, and 1980’s Zenyatta Mondatta. The more punk-driven stuff resonated with me, but also their more extended jams like “Bring on the Night” or “Walking on the Moon”. I get why Synchronicity has always been labeled their masterpiece — the sheer number of radio hits alone is stunning — but I think, as a whole, it’s a little weak.

“Walking In Your Footsteps” smells of dank cheese, especially with the dinosaur imagery, while “Miss Gradenko” is almost unlistenable, at least in terms of lyricism. I’d even argue this is one of those rare albums where it’s backloaded. For me, it doesn’t actually start until track six, “Synchronicity II” — basically when all the radio hits come piling down. What do you think, Len?

Len Comaratta (LC): Being born in 1970, I was very much alive for The Police’s entire career. I’m sure that I had heard various earlier singles but it wasn’t until Ghost In the Machine that I really began to know who they were. I remember a kid in school, Chris SomethingOrOther, who used to talk about bands his older brother liked, the Police being one of them; but it was seeing the video for “Every Little Thing She Does Is Magic” on Casey Kasem’s weekly television show America’s Top Ten (it mirrored his Top 40 radio countdown) that was my first real exposure. When I moved from Twentynine Palms to San Diego in the summer of ’82, I began to watch MTV and it was only then that I finally saw videos for older singles such as “De Do Do Do, De Da Da Da” and “Don’t Stand So Close To Me” (the original version).

I have to agree with you as I also am more a fan of other albums of theirs, specifically Outlandos d’Amour and Zenyatta Mondata(ironically, of the band’s five albums, those are the only two I don’t have on vinyl) and my favorite song is probably “Bring On the Night” off Regatta de Blanc, a track I play often on air. Outlandos was definitely the album I listened to the most in my later years (those being the years I actually understood the band’s importance and not just a radio fan). Though it contains their biggest commercial hit (“Every Breath You Take”) and was probably their biggest selling album, I have to disagree with you about calling Synchronicity their masterpiece. I reserve that probably for Zenyatta, or even their debut, though that can be something of an understandable stretch. I tend to lump Synchronicity in with Ghost as a tie for fourth. Perhaps the status is given because of the darker nature of many of the songs, especially the singles. Long before Alanis made stalking an ex-lover seem progressive, the Police made it sound sexy.

You reveal yourself to be of the digital generation when you reference the album as taking off after track six – “Synchronicity II”. Only on CD does that really mean anything, as the album’s major singles – “Every Breath You Take”, “King of Pain” and “Wrapped Around Your Finger” are all on SIDE TWO of the LP (“Synchronicity II” is the final song on side one). On CD all the songs flow into each other, but as we know with LPs, they have to be flipped over, which sometimes interferes with that fluidity, so putting all the singles on the second side almost begs the question as to why would a band not put a single on the first half of the album (which they did on all their other albums) and something you alluded to when you mentioned the album being so back-loaded.

It’s funny how you slam “Miss Gradenko”, as that song and “Mother” were the only songs on the album written with Copeland or Summers, respectively – and both get often get slammed, though the latter is a bit easier to handle than the former. But I do agree, that they are the weakest spots on the album.

It might be of interest to note that Synchronicity was not supposed to be the Police’s final album. Summers broke his arm or wrist and was unable to play guitar, thereby delaying a new album. As such, they put out the greatest hits collection and the “Don’t Stand So Close To Me ‘86” single. Watch the video to the updated single and you’ll see him wearing a cast.

And while I agree that Summers is an incredible guitarist, I personally believe that the true heart of the Police’s sound is Copeland’s drumming. His staggered rhythms and hitting on the upbeat are a big contribution to that ‘ska’ sound and the group’s original sound as a whole. Listen to his drum patterns and you will notice they don’t tend to conform to a “normal” rhythm section. 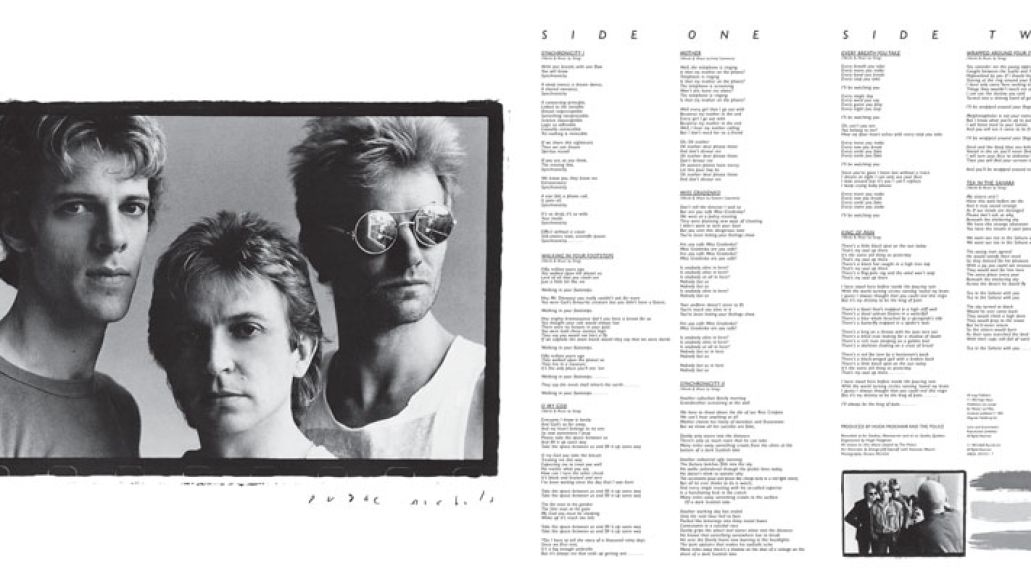 MR: Oh, you’re preaching to the choir about Copeland. In fact, for a good two to three years I posted regularly on his online forum, where we’d geek out about Klark Kent vinyls, his friendship with the Foo Fighters, and his work alongside Les Claypool in Oysterhead. Pretty sure a couple of my scars are from a few arguments where I’ve suggested he’s rock ‘n’ roll’s greatest drummer, even over John Bonham and Neil Peart and Keith Moon. His weird evolution of jazz-styled drumming is one of the world’s great wonders, especially how he makes it look so goddamn easy.

On the 2007 reunion tour, when The Police performed “Wrapped Around Your Finger”, Copeland would just ease away from his drumset and roll through his percussive fills like a mad scientist — only he never looks mad, or stressed out, or in pain. It’s child’s play for him, and while that probably bugs the hell out of any frustrated rookie drummers out there, it’s popcorn fodder for us fanatics. So, yeah, case closed: Copeland’s the star of the Police.

Yet it’s always been Sting’s show. Speaking of which, I never realized they planned on doing another album. I always recalled them touring in support of Synchronicity – arguably one of the most epic tours of the ’80s — and then calling it quits because Sting was off on that island of turtles or whatever. Though, who could forget their disappointing greatest hits sessions? Seriously, that 86 version of “De Do Do Do, De Da Da Da” is Melba Toast and the same goes for “Don’t Stand…” — just awful.

My main gripe with Synchronicity — aside from its sequencing, which you’ve already pointed out is quite a different experience on vinyl (which I own, by the way) — is that it doesn’t feel like an album by The Police. They shed their reggae skin, they lose a lot of the meditative atmospheres like “Behind My Camel” or “Secret Journey” or “Walking on the Moon”, and it’s far too sentimental. “Every Breath You Take” will forever be their landmark hit, and that’s fine because it’s everything it needs to be, but to me, it doesn’t entertain the bleak danger that their previous juxtapositional work had (e.g. “Don’t Stand So Close to Me”, “So Lonely”).

Out of the lot, “Wrapped Around Your Finger” and “Synchronicity II” feel truest to The Police’s original sound. The rest gets over-romanticized by Sting; for example “King of Pain”. Personally, it’s one of my favorite Sting-led tracks, though I’ve always paired it next to his other works like “If I Ever Lose My Faith in You” or “Fields fo Gold”. Then there’s “Tea in the Sahara”, which gets got by Gordon with a pasteurized chorus begging for placement in an a documentary at Epcot. As for “Murder by Numbers”, well, there’s a reason Sting performs it religiously on tour.

It’s not his fault, but I think this album really sheds light on the whole Us vs. Sting debacle.

Dusting 'Em Off: The Police - Synchronicity