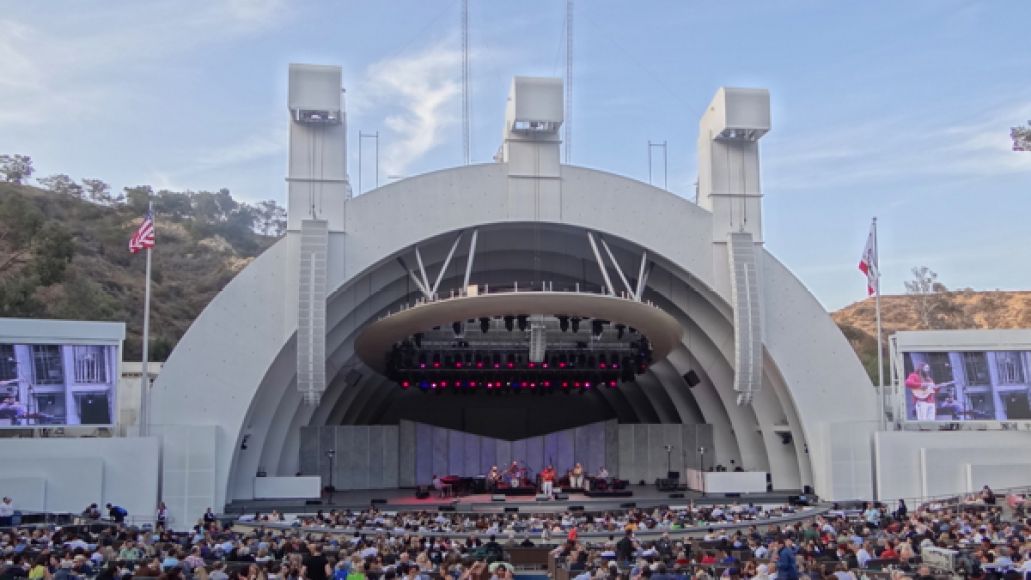 Sunday’s songwriter-focused bill of She and Him, Emmylou Harris and Rodney Crowell, and Matthew E. White marked the first Sunday of the season for KCRW’s annual World Festival at the Hollywood Bowl, attracting a subdued, but attentive crowd that nearly filled the legendary 18,000 seat natural amphitheatre.

First up was Matthew E. White, playing the Hollywood Bowl for the first time and doing an admirable job within the confines of a brief 30-minute time slot as most patrons chatted and applied various spreads and hummuses to their pita bread and filled their wine glasses (or Tanqueray and tonic like the admirable modern gentleman sitting just below us).

It was already quite clear after hearing his tragically beautiful 2012 debut LP Big Inner that White has the creative vision, musical chops, and intrigue to potentially carry his own night at the Bowl years from now and this mini-set provided a nice first glimpse of his live band. On a postcard-worthy evening at the Bowl, White opened with “Will You Love Me”, preaching to the attentive that “Darkness can’t drive out darkness/ Only love can do that, only love can do that.” 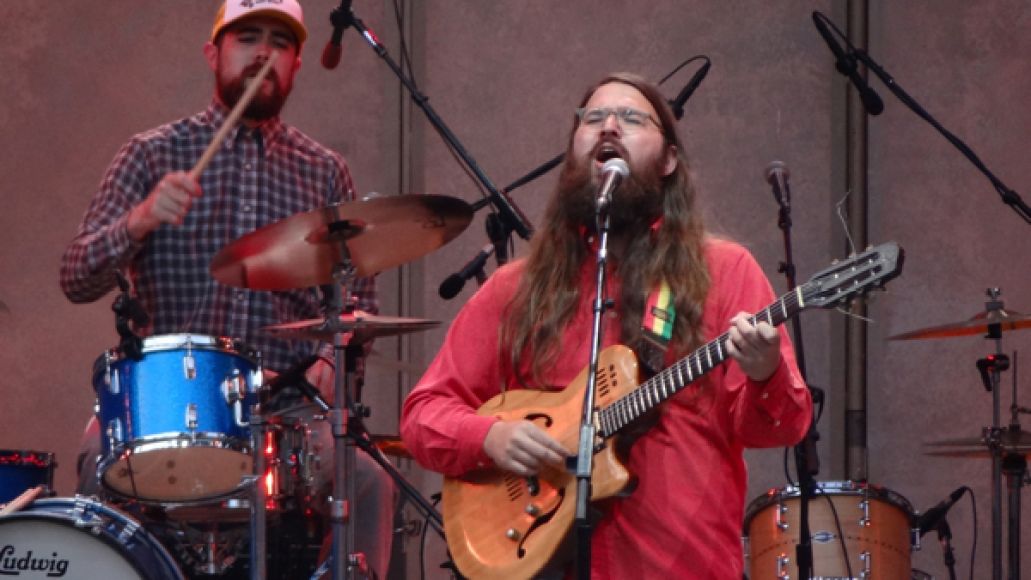 White’s live show is of a quality and depth that demands a high level of attention to the musical layers and lyrical profundity to fully appreciate. “Big Love”, the most well-known song in White’s still-small arsenal showed hopeful signs of moving into an extended jazzy improv before the band leader had to pull the rip chord to ensure he could get in the lengthy and multi-faceted “Brazos” before the final bell rang at 7:30 p.m.. “Brazos” was an excellent choice of a closer, a revelatory 70s-styled manifestation of modern vintage gospel that meandered beautifully towards a climactic full band freakout reminiscent of Wilco’s noise pop interludes after countless “Jesus Christ Is Our Lord / Jesus Christ, He Is Your Friend” refrains.

After a brief intermission, Emmylou Harris and Rodney Crowell took to the stage and, despite the Bowl’s spacious stage plot, the duo and backing band chose to keep a tight-knit unit, setting up as if they were playing an intimate showcase at a Nashville bar. Opening with Gram Parsons and Emmylou’s famous tune, “Return of the Grievous Angel” Harris and Crowell nailed the tune’s intricate pitch and key changes beautifully and there was perhaps no better moment in the night then when Harris and Crowell belted out the timeless line “Twenty thousand roads I went down down down / And they all led me straight back home to you.” Next was another Parsons tune, “Wheels”, and a note-for-note acknowledgement of the late Parsons’ rendition, the gone-too-soon legend who tragically passed only a couple hundred miles away in Joshua Tree, CA from a morphine overdose.

The two Parsons tunes set the unsurprisingly wistful tone that the majority of the set would carry – including a rendering of “Love Hurts”, a song Harris introduced as “the granddaddy of the sad songs.” Alas, with “Hangin Up My Heart”, the set picked up speed and Crowell’s Texas roots shined through during the two-step arrangement with accordion and steel. Next, the band kicked into a honky tonkin’ version of Roger Miller’s “Invitation to the Blues”, a barn burning shuffle that picked up the notably slow pace of the first half of the set. 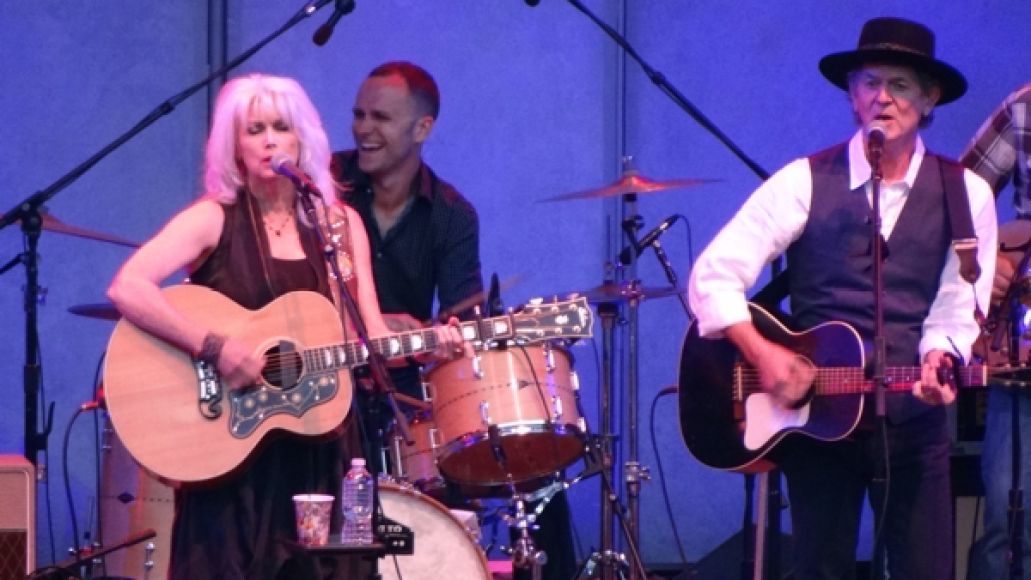 Later, the duo offered a striking tribute to Waylon Jennings’ “Dreaming My Dreams” (a tune appearing on Harris and Crowell’s 2013 release Old Yellow Moon). If there was a moment of pindrop silence in the normally chatty pre-headliner Bowl setting it was when Harris delivered the “Someday I’ll get over you/ I’ll live to see it all through/ But I’ll always miss dreaming my dreams with you” verse in a spectacular fashion that washed over the seats like a warm blanket.

Alas, the pace picked up when frequent collaborator and guitarist Albert Lee arrived onstage for a racing version of “Luxury Liner”. All in all, it was a pleasant set of music and genteel exhibition of classic country and Americana music’s (when done right) nearly universal appeal and continued viability.

Finally, the evening’s headliners took the stage in the shadows to a roaring ovation and kicked right into a dutiful 21-song set of mostly original material from the duo’s three albums over their now half-decade career. In a flowing dress, the radiant Zooey Deschanel took most of the vocal leads throughout the show, moving from piano, to upright keys, to tambourine and various styles and sizes of guitars and ukuleles while Ward flanked her as a dapper sideman to the left, playing a countless array of classic axes bringing full-flavored tones. Most of the fare (and Deschanel) was good-spirited and bouncy topical pop that would’ve been no-brainer programming on AM radio stations decades ago. 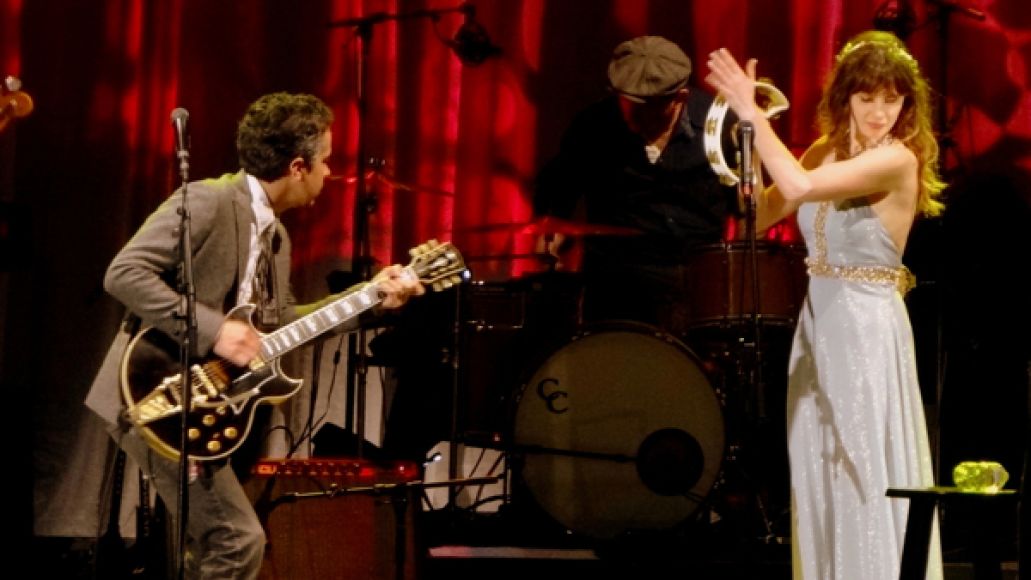 Opening with the swinging doo-wop tune “I Was Made For You”, Deschanel and M. Ward (with three backing singers and full band) began a throwback-heavy outpouring. “Baby” followed and provided the first chance for female fans to ogle over Ward’s signature gruff vocal howl. The only drawback of a She and Him show, though, is a strange avoidance of Ward’s canyon-esque catalog of quality body of work – not even a single track from Post-War, Hold Time, or his most recent A Wasteland Companion were played. That’s a whole lot of amazing to ignore.

Standing as a mere duo midway through the show, the CA-born duo played Frank Perkins’ Alabama staple “Stars Fell On Alabama” before a skyscape background dotted with stars. Highlights from the original tracks included “Ridin’ In My Car” and “In The Sun” that fit right in alongside sizzling cover of Smokey Robinson’s soul classic “You Really Got a Hold On Me” or the closing “I Put A Spell On You”. 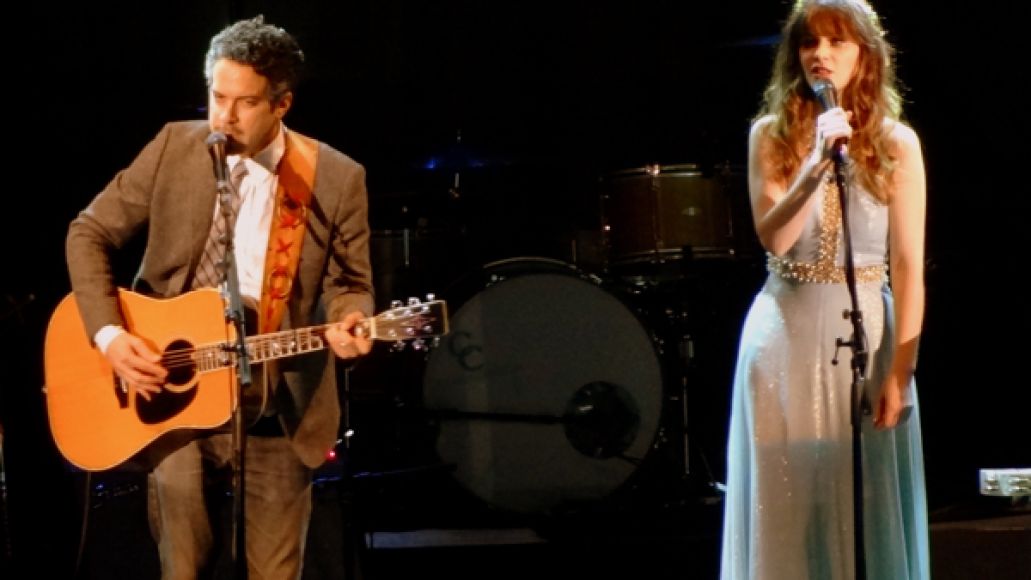 It’s hard to manufacture the kind of affability that Ward and Deschanel exude when performing together and their chemistry as a singing duo is part of their appeal that goes far beyond the unavoidable fact that Deschanel was first a world-renowned actress before entering the pop music arena and immediately gaining critical traction. Three albums deep and a healthy draw to fill the Hollywood Bowl five years later are enough proof that She and Him has far transcended the point of being discarded as a mere vanity project.

Matthew E. White Setlist:
Will You Love Me
One of These Days
Steady Pace
Big Love
Brazos

Emmylou Harris and Rodney Crowell Setlist:
Return of the Grievous Angel
Wheels
If I Needed You
Love Hurts
Hangin’ Up My Heart
Invitation To The Blues
Dreaming My Dreams
Back Where We Were Beau
Luxury Liner
Gain Control
Leaving Louisiana
Ain’t Living Long

She and Him Setlist:
I Was Made For You
Baby
I’ve Got Your Number
Take It Back
Change Is Hard
Hold Me Thrill Me
Thieves
Turn to White
I Thought I Saw
Smokey
Stars Fell On Alabama
Ridin’ In My Car
Don’t Look Back
Magic Trick
Why Do You Let Me Stay
In The Sun
Never Wanted Your Love
Together
I Could’ve Been Your Girl
Sweet Darlin’
I Put A Spell On You

Live Review: She and Him, Emmylou Harris and Rodney Crowell, and Matthew E. White at LA's Hollywood Bowl (6/23)