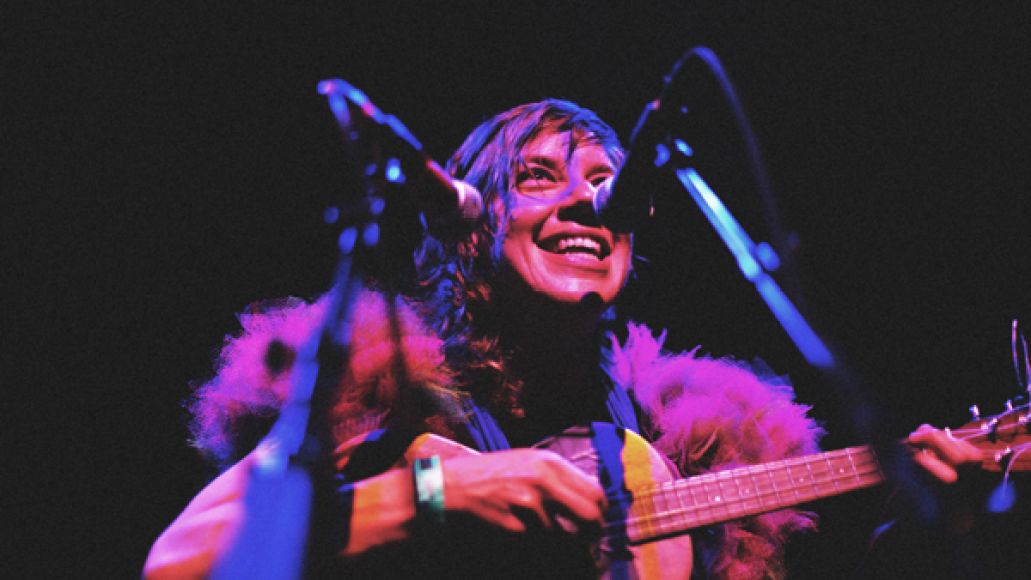 Merrill Garbus, AKA tUnE-yArDs, has begun work on the follow-up to her 2011 breakout album, w h o k i l l. In a new essay for The Talkhouse, Garbus reveals that she’s been studying drumming under Haitian-born musician Daniel Brevin and recently took a trip to Haiti with the desire “to situate myself in a non-western musical tradition.”

In regards to the album, Garbus said it’s tentatively titled Sink-o. “Right now it’s called Sink-o, but who knows if that will remain,” she explains. “It came from my obsession with the word “syncopation,” which is a miserable sink-o of a word. Syncopation derives its definition from what it is not: rhythmically speaking, it’s not what you “expect” to happen; it’s a “deviation” from the “norm.” The word assumes that you are situated in a western music tradition.”

Garbus is working on the album in her rehearsal space in Oakland. She describes the process as “a wild mess. Chaos. I’m trying anything and everything rhythmic, and sometimes it sounds like an out-of-control beast I cannot begin to tame. But the rule is: don’t try to get it right, just be in the middle of it.”

And in a sign that her live shows are about to get all that more — um, nuts-o? — Garbus also details her passion for dance. In Haiti, Garbus and her group “took four days of intensive folkloric and contemporary dance classes at the Ecole Nationale des Arts (ENArts)”. Back in Oakland, she’s enrolled in a class that dances to Yanvalu. She explains, “I’m not thinking about the downbeat; I’m following my teacher and the shadows of the dancers around me and my fingertips follow the bell and my waist follows the maman drum. Why spend one’s time trying to find the downbeat when that’s not what will get you where you want to be?”

Report: Britney Spears Has Been Pushing to End Her Father's Conservatorship for Years