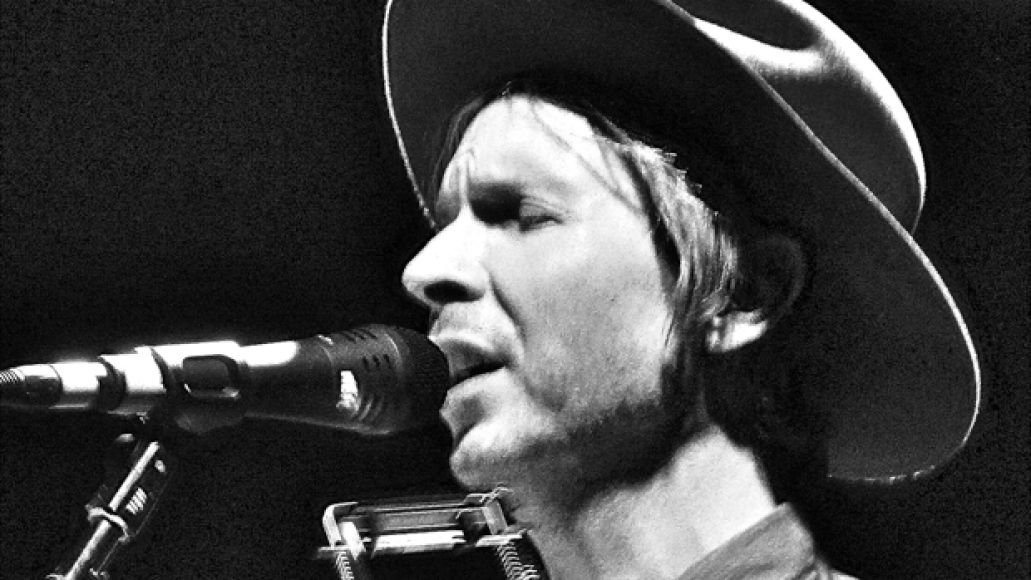 Scarcity breeds demand — any freshman who’s slogged through Econ 101 can tell you that.

So when New York’s Le Poisson Rouge revealed on Tuesday morning a surprise acoustic gig by Beck three days later, it came as little shock when they sold out in 30 or so minutes. The Greenwich Village venue accommodates well under a thousand — hence the enviable intimacy of the affair — and Beck himself has been a bit of a rare commodity these days, materializing only for scattered tour dates and one-off collaborations since promoting Modern Guilt back in 2008. Recent singles by the artist, “I Won’t Be Long” and “Defriended”, hint towards a fully fledged comeback in the fall. But the esteemed Mr. Hansen performed neither during his Friday night appearance in New York. Emphasizing past over future, he seemed to be in an altogether reflective mood, treating fans — the lucky few — to a thrillingly unpredictable, career-spanning set that touched upon nearly every album in his two-decade discography, including early gems from 1994’s Stereopathetic Soulmanure and One Foot in the Grave.

There was no opening act. Clad in a denim shirt and black fedora, Beck emerged just after 8 p.m., his boyish blonde features largely untrammeled by his 43 years. Though it was billed as an acoustic set, he wasn’t performing solo — joining him onstage were familiar collaborators Roger Manning (keyboard), Smokey Hormel (guitar and mandolin), and Jason Falkner (bass). ”We’re gonna be playing a bunch of acoustic songs from Sea Change and stuff,” Beck announced. “We’ll see where the night takes us.” Fittingly, they launched into that record’s gorgeously spare opener, “The Golden Age”, and then a warm, pitch-altered take on Odelay‘s “Jack-Ass”. The band’s staunch professionalism and soft-rock flourishes made for an odd fit with the ramshackle production flair of the pre-Mutations material — but most of the time it worked. Beck managed to update oldies like “Hollow Log” (which has never sounded so pretty) and “Pay No Mind (Snoozer)” (which found the artist censoring his “giant dildo crushing the sun” simile) without trying to mimic the long-abandoned slackerism of his younger, goofier self. 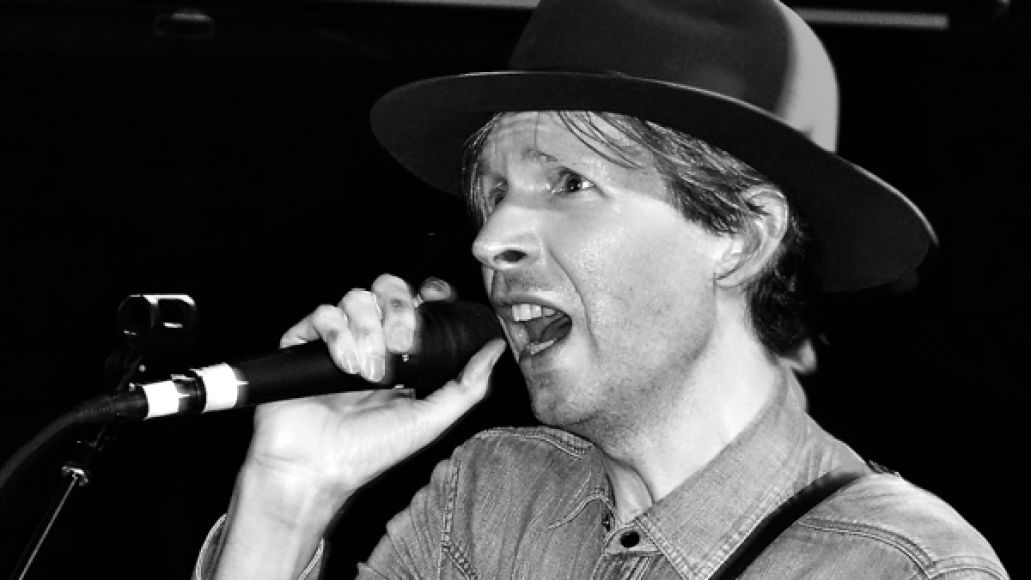 Beck could have billed it as a Storytellers performance. The singer was in talkative spirits, reminiscing and cracking jokes in between songs, perhaps to deflect the heaviness the Sea Change material necessarily entails. (It has long surprised me that Beck is able to perform such painful, candidly confessional material at all while Neil Young steers clear of Tonight’s the Night and Rivers Cuomo regards Pinkerton with some mix of shame and revulsion. But maybe those two years in between writing and recording the album, during which Nigel Godrich came aboard with string arrangements, made all of the difference.) After a haphazard attempt at “Lazy Flies”, during which he mangled his own lyrics, Beck joked, “When I was writing that song, I was seeing how many chords I could fit in one song. I missed about three of them.” Cuing up a drum machine, he quipped, “We brought with us a traditional folk instrument — it’s called the Korg.” He spoke about playing “Heaven’s Ladder” with the NASA Space Orchestra. And during “Pay No Mind”, the artist waxed nostalgic about his days street-performing in Astor Place during his involvement with New York’s anti-folk scene in 1989 and 1990 — “a boom time for folk music,” he joked. He spoke of not having any money. “The only way to make money back then was by doing this,” he said, belting out the “Hey Jude” coda. “I did not know that at 18.”

Then there was a detour into selections from Song Reader, Beck’s unrecorded 2012 collection of sheet music, which he carried on hand. “Ordinarily I wouldn’t make you listen to songs you haven’t heard,” he said sheepishly. “But this is the only way to hear them.” Indeed, “Heaven’s Ladder” and the McCartney-esque “Just Noise” sounded so good, it was bittersweet to realize they may never receive studio renditions. 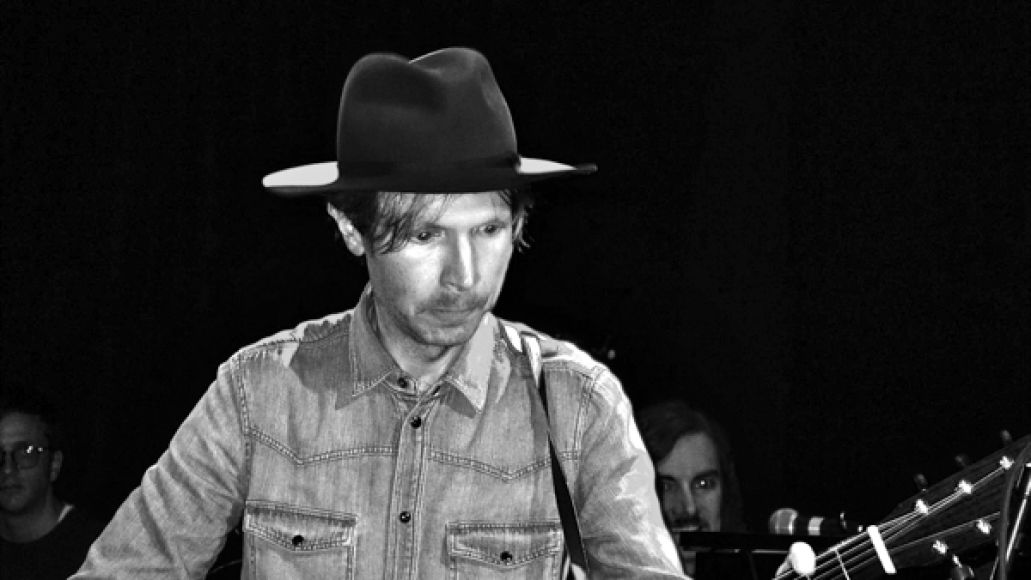 The latter half of the set was looser, filled out by covers — Chris Bells’ “I Am the Cosmos”, the Everly Brothers’ “Sleepless Nights” — and unexpected oldies, including a solo harmonica riff on “One Foot in the Grave”. A minimalist, Korg-driven take on “Sissyneck” segued into “Billie Jean”, during which Beck goofily attempted a moonwalk before an unnamed bystander jumped onstage and showed him up. (“Scarecrow”, the Beck song that actually does ape the “Billie Jean” bass riff, was nowhere to be found — nor anything from Guero.) Surprisingly — or all too predictably, I’m not sure — Beck closed with “Loser”, to mixed success. The Korg beat dragged in comparison with the original’s Johnny Jenkins sample, Beck’s delivery felt eons removed from his 1993 wise-ass self (“Get crazy with Cheez Whiz!”), and the rendition felt more obligatory than inspired.

But then “Loser” faded, the house lights flipped on, and a low murmur of excitement filled the room. No mention was made of Beck’s upcoming material. But before you move forward, it’s okay to look back. You could tell this was the sort of performance members of the audience would be bragging about 15 years later — or on Consequence of Sound the next day.