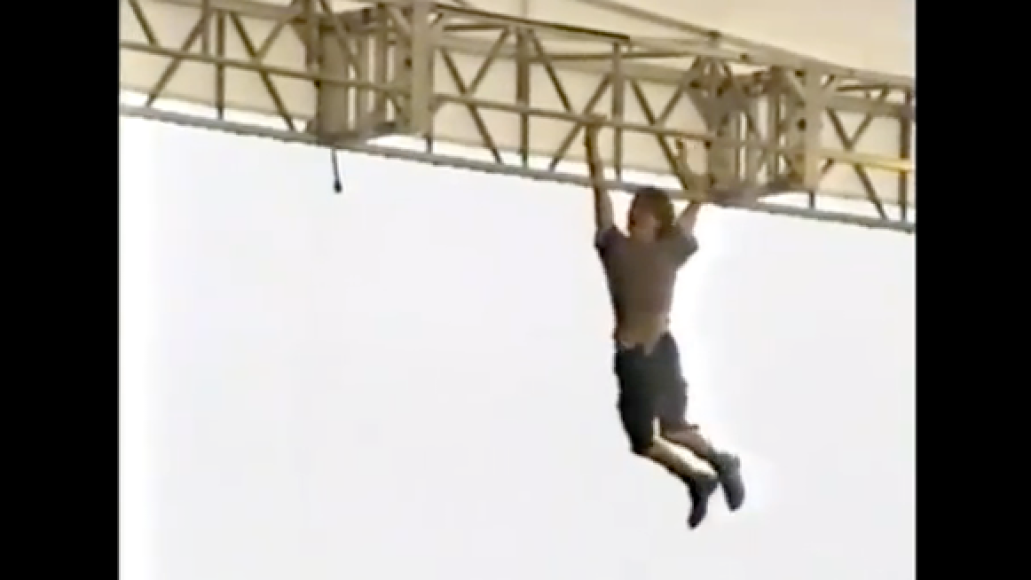 Welcome to a new feature entitled Video Rewind. Every Friday, a CoS staffer shares a beloved video clip dug up from the depths of the Internet. Consider it a quick jaunt down memory lane via moving pictures. In honor of Pearl Jam’s punk-y new single, “Mind Your Manners”, their new album, and supporting tour, we look back at a time when Eddie Vedder was a  younger, ballsier frontman.

With over 20 years as a band, Pearl Jam can stoke fan anticipation by displaying little more than a few green numbers slowly ticking down to zero. At their onset, though, they had riskier ways of whipping up the masses. Climbing stage scaffolding, swinging from ceiling rafters, and diving from camera cranes were all part of Vedder’s M.O. during the early ’90s, moments of balls-out rock ‘n’ roll insanity as hard-hitting to witness as “Mind Your Manners” is to listen to.

Footage from their September 20th, 1992 concert at Seattle’s Magnuson Park as part of Drop in the Park, a Rock the Vote registration effort disguised as a free concert, shows just how reckless Vedder could get. After slipping some lyrics from Henry Rollins’ “Tearing (Me Apart)” into “Porch”, he tosses his mic over the scaffolding above his head. He then climbs a rail and shimmies across the scaffolding like a child on monkey bars. Dangling high in the air, Vedder yells, “I can see you all from here!” before abseiling down the cable and using it as a vine to Tarzan himself into the crowd.

The image of Vedder swinging on that cable graces the cover of the Drop in the Park live album packaged with one of the 2009 reissue editions of Ten. And while we probably shouldn’t expect to see Vedder up on the rafters on this upcoming tour (though they could always surprise us), those antics are an unforgettable part of Pearl Jam’s legacy. “Over the gigs, it got higher and higher,” Vedder says in Pearl Jam 20. “You do one and you notch it up because you survived the last one, so. We’re gonna take this to some level that people aren’t gonna forget, and if that means risking your life, we’re gonna do it.”

Kat Von D Shares New Single "I Am Nothing": Stream

Marvin Gaye Biopic Officially in the Works from Dr. Dre and Jimmy Iovine