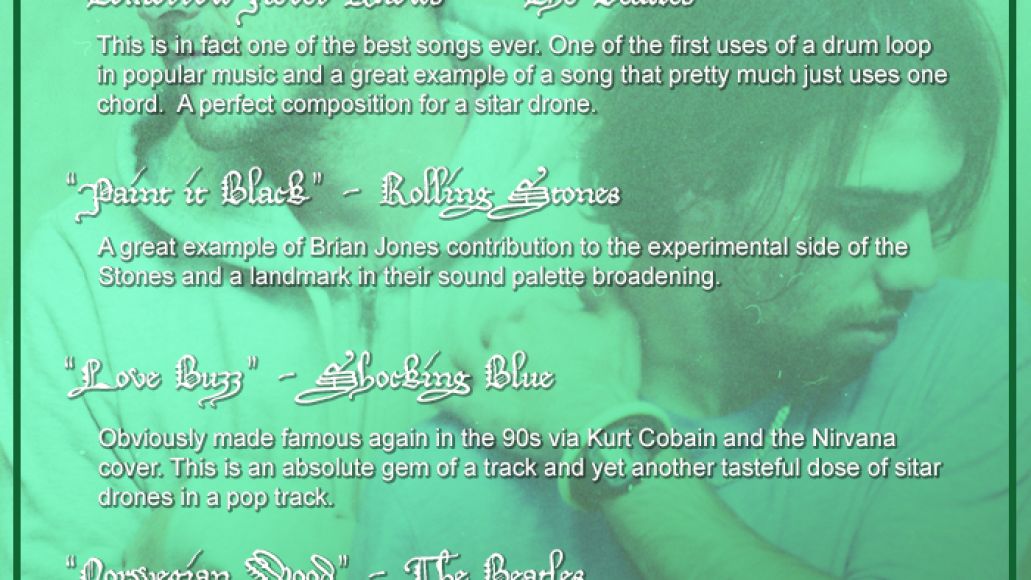 The Top Five is a brand-new feature where we ask your favorite artists to create a list of five things revolving around anything that comes to their mind. Whether’s it’s their five favorite Sega Genesis games or their five most cherished pieces of tupperware, it’s all for them to decide and for you to read.

This is in fact one of the best songs ever. One of the first uses of a drum loop in popular music and a great example of a song that pretty much just uses one chord a perfect composition for a sitar drone.

A great example of Brian Jones contribution to the experimental side of the Stones and a landmark in their sound palette broadening.

Obviously made famous again in the 90s via Kurt Cobain and the Nirvana cover. This is an absolute gem of a track and yet another tasteful dose of sitar drones in a pop track.

One of the earliest examples of sitar in popular western music and testament to George Harrison’s sonic exploration.

Had to put a hip hop track in there didn’t I? Where there’s weed the sitar isn’t far behind.

This week, their full-length debut, Howlin, hits American stores via Marathon Artists. The band itself will follow this fall for their first North American tour, starting September 30th at New York’s Mercury Lounge. Consult the dates below.